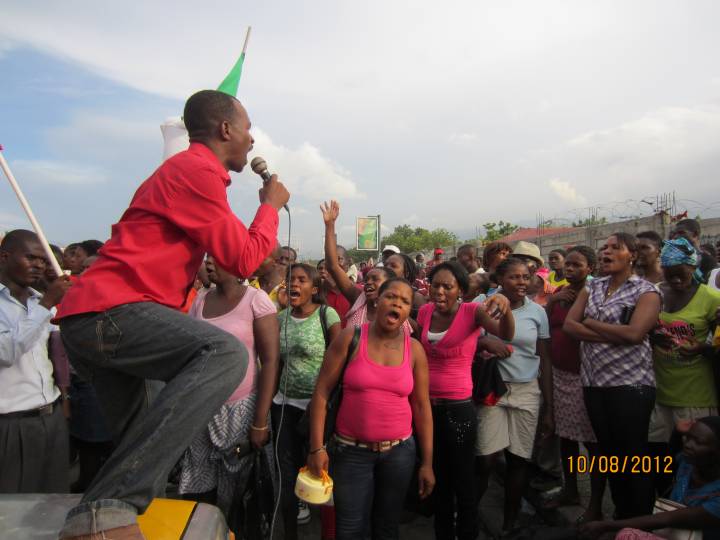 Batay Ouvriye (Workers Fight) is an autonomous workers’ organization—not run by establishment unions, NGOs, students, or other outside groups, but by workers themselves. In 1995 it launched a struggle against Disney contractors who were paying workers 30 cents an hour to stitch together Pocahontas t-shirts. It has branches in most geographical areas of Haiti, organizing garment workers in assembly factories of the Free Trade Zones, agricultural laborers, unemployed workers, and others.

Batay Ouvriye also organizes amongst other sections of the popular masses, such as small peasants, and builds alliance with other organizations. They fight for better conditions, livable wages, and for an end to occupation by UN military forces.

The garment industry is a global web of nightmares, where suppliers compete to offer their products at the lowest possible cost to stores like Walmart, The Gap and J.C. Penney.

The conditions for Haitian sweatshop workers are among the harshest in the world. The minimum wage, the lowest in the hemisphere yet still often violated, does not provide enough for a family to survive. Human rights abuses such as sexual harassment are commonplace. Workers who attempt to unionize are instantly (and illegally) fired.

Multinational corporations love this. Through their international representatives, the IMF and World Bank, and using UN troops as enforcers, they have seized Haiti like a pack of predators, opening up free trade zones, industrial parks, and resorts for foreign tourists. Opportunistic NGOs binge on donations following natural disasters. The Bush-Clinton Foundation has bought up huge swaths of coastal land on which to build fancy hotels.

Destine, an assembly worker in Port-au-Prince, staggers beneath the merciless burden of these forces. Yet while most workers are too overwhelmed by the daily struggle for survival, and too afraid to risk losing what little they have to fight back, she is different. She stands up to the two-headed monster of exploitation and imperialism, determined to change conditions for herself and her fellow workers, and for Haiti as a whole. She is a member of Batay Ouvriye (Workers’ Struggle).

As one of the few truly autonomous workers’ organizations in existence, Batay Ouvriye is not only making a difference in Haiti, but can also serve as inspiration and a blueprint for those around the world who are also attempting to organize against the predations of global capitalism.

My name is Manuel, delegate of the section Multiwear in SOTA. We cannot send our kids to school. Whatever they give us, we have to pay transportation. We cannot even do anything with the salary. We start work at six o’clock. We finish at five. And the quota is huge. They have no intent to pay us… we don’t even have time to eat because we cannot meet the quota. They are not thinking about us. They are thinking about their own interests. Where we work, the state is only helping the bourgeoisie. They do not understand us, and we are the only ones working. Whatever the products that come, the pants and the t-shirts, we are the ones producing them. We labor hard, and we don’t get paid. We want a solution. Today we are happy that we have foreigners that are able to listen to us and hear us, so they can give us their support. We want the internationals to raise the issue to the people here so they listen to us.

Haitian garment workers receive the industry’s lowest wages in the hemisphere: 200 gourdes, or less than $5 per day. According to a 2008 Worker Rights Consortium study, a family of one working member and two dependents needed at least 550 Haitian gourdes, or $12.50, per day to meet normal living expenses.

On October 1, 2012, Parliament raised the minimum wage from 200 to 300 gourdes (about $7.25 a day). Manufacturers vehemently oppose this, and are responding by making the lives and conditions of workers even more miserable.

My name is Jaques. I’m a laborer at Genesis. The state asked for 300 gourdes, but the factory owners are only giving 200 gourdes. They already fired a lot of people, and now I am personally in litigation with them. They even threatened me that I could go out and never come back. I have a wife and kids. I would like to know how far this thing will go. The bosses put some scabs. [The factory owner] told me, “I don’t need you.” He told me if I don’t cool off, he’s going to make sure I cool off, the way he knows. I’m in the hands of God. I’m asking solidarity from SOTA and with you, to look after everybody here. Our job represents everything for us. Even though the money’s not enough, the job represents everything to us.

Support the workers’ movement in Haiti!

Your contribution to Batay Ouvriye will assist efforts to build and strengthen the federation of trade unions, to organize meetings, marches and other events, to support organizers who have been fired or blacklisted from factory jobs, and to collect legal and strike funds.

Funds are also needed for:

Send donations via Paypal (funds will be transferred) to:

steph@minimumsecurity.net (BE SURE TO INDICATE: FOR BO);

Or send directly by wire transfer:

For further credit to:

In the US, to make any other arrangements, please contact the Batay Ouvriye Solidarity Network: bosolidarity@yahoo.com

“The fight that we are doing is very dangerous. The work is not easy at all. With your support, we will be victorious.”