UPDATE: Video for the June 23 meeting is now available.

“The economic crisis and left responses,” a talk by Andrew Kliman, author of Reclaiming Marx’sCapital: A refutation of the myth of inconsistency

“A new organization for a time of crisis,” a talk by Anne Jaclard, National Secretary, Marxist-Humanist Initiative

Tues., July 21
Marx’s law of the tendential fall in the rate of profit.
Led by Andrew Kliman

Tues, July 28
The crisis of the free market and the turn to state-capitalist ideology.
Led by Anne Jaclard

As the worst economic slump since the Great Depression calls into question the viability of the capitalist system, and as people increasingly doubt whether capitalism is desirable or even necessary, we need to unite theory with practice and an understanding of the current crisis in order to respond effectively. We invite everyone seriously interested in this task to join us in the seminar series. Participants will be expected to have done the readings prior to each session.

Donations are requested, but no one will be turned away because of inability to pay.

Please call us at (888) 579-2245 or write to us at mhi@marxisthumanistinitiative.org in order to register for the seminar series and obtain the syllabus. 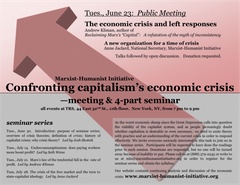 Debate on Economic Crisis Erupts in the CWI: start of much-needed rethinking on the left?

A major dispute over the causes of the latest capitalist economic crisis, and how to respond to it, has erupted in the Committee for a Workers’ International (CWI), an orthodox Trotskyist organization. Its largest section, […]

Should I Turn Down the Thermostat or Overthrow the Capitalist Mode of Production?

“Should I Turn Down the Thermostat or Overthrow the Capitalist Mode of Production?,” by Brendan Cooney. Challenges assumptions that rising greenhouse gas emissions are attributable to consumers’ behavior and the fact that the wrong leaders are in charge. […]

On March 10, a lively debate took place between Andrew Kliman and Steve Keen, following their presentations on the causes of the recent economic crisis, during the opening plenary of the Jornadas Economía Crítica 2016 […]