Please help Kenyan children to survive and go to school

International Call for Withdrawal of U.N. Troops From Haiti

Revolutionary Association of the Women of Afghanistan (RAWA)

MHI holds monthly meetings via Skype, some of them open to guests. We are also holding our Annual Conference via Skype on December 5 & 6. If you wish to be invited to a meeting or the conference, write to MHI’s email and tell us a little about yourself and why you wish to attend.

MHI encourages submissions for our publication. What are you involved in? Please send us an article.

MHI will participate with others in these two panel discussions:

Where is the Women’s Struggle Today? From Liberation to Equality

Donald Trump-An Extraordinary Danger to the World. What We Can Do

Left Forum 2019 will include 2 MHI-sponsored panels on Sunday, June 30. Both will be held in room H301 of Long Island University’s Brooklyn Campus.

Friday, April 12, 2019 MHI program in New York City:
“Brexit and the Future of Ireland and Scotland: Beyond the Pro/Anti-Brexit Quagmire”

The program will feature Chris Gilligan, Scottish/Irish academic, author, and Open Borders activist, who will draw attention to the human dimensions of immigration restrictions and highlight grassroots movements for human freedom in existing pro-immigrant campaigns. A second speaker, Adam Plante, will give “Remarks on Marxist-Humanism’s Challenge to the ‘Left.,” emphasizing the need to reject commonly “given” alternatives and to ground action in liberatory philosophy.

“Fighting Trumpism and Left Accommodation: Marxist-Humanist Perspectives”. The video of the event is available here.

Also, we hope you will visit our book table throughout the conference.

A study group on Raya Dunayevskaya’s 1973 book,
Philosophy & Revolution: from Hegel to Sartre and from Marx to Mao.

We will do a close textual reading of this foundational work of Marxist-Humanism.

A week-end in December, held in NYC, London & cyberspace

For members, supporters, and invited guests, our Annual Conference will discuss the past year and project future tasks for the development of Marxist-Humanist philosophy and organization. Write us with information about your interest if you wish to be invited.

MANY MHI PUBLIC MEETINGS ARE RECORDED AND POSTED IN OUR PUBLICATION, “WITH SOBER SENSES.”

A video and some of the papers are published in our publication.

Stockholm: “What makes a free society? Marxian and Libertarian perspectives” on Wed. 14 Sept. at 6:30 pm in Södra Teatern Kägelbanan. A debate between Andrew Kliman and Per Bylund, co-sponsored by MHI and bubb.la.

Details of both events in first featured article in our publication.

MHI’s Annual Conference
NYC & cyberspace in December
For members, supporters, and invited guests, our Annual Conference will examine the past year and project future tasks for the development of Marxist-Humanist philosophy and organization. Write us for information.

During the 2015–16 school year, Marxist-Humanist Initiative (MHI) is sponsoring a course on the first volume of Marx’s Capital: A Critique of Political Economy. Marx regarded Capital as a theoretical blow to the bourgeoisie from which it would never recover. The course is taught by Andrew Kliman. Only members of the class have access to the videos. It is now too late to apply, but you may wish to see the article in With Sober Senses for more information about the course.

March talks in London:  MHI launch of public events in the UK.   Videos are here.

MHI meeting on state-capitalism and the nature of the Soviet Union, Jan. 23, 2016.   Recording and text of talk.

MHI’s Annual Conference is in early December this year.

Friends may be invited to attend; write to MHI at mhi@marxisthumanistinitiative.org if you are interested.

Information is from the sponsors of the events.

1. Thurs., July 2, 1-2:40pm, “The Whiggish Foundations of Marxian and Sraffian Economics,” presentation in panel on “Growth/Ideology”

Videos of MHI’s 3 panels are published in With Sober Senses. They were:

Classes via Skype on Marx’s Critique of the Gotha Program as New Foundation for Organization
MHI conducted this class series on Sundays Nov. 2 through Dec. 7 by Skype.

MHI’s Annual Conference
NYC in December
For members, supporters, and invited guests, our Annual Conference will examine the past year and project future tasks for the development of Marxist-Humanist philosophy and organization. Write us for information.

The Politics of Inequality Discourse
SEE VIDEO OF THIS MEETING
Monday, June 23 at 7:00 p.m.
at Pearl Studios, 500 8th Avenue, Manhattan (bet. 35-36th St.), Room 403
Outside NYC: write MHI for Livestream information
This discussion will explore the politics behind the inequality rage. In an opening talk, Andrew Kliman will suggest that this phenomenon is rooted in acceptance of the permanence of capitalism, and in a failure to listen to the renewed aspirations for a different future that opinion polls and grassroots struggles have brought to light. He will also ask why so many liberals and leftists resist accepting facts that challenge their preconceptions about the extent and causes of increasing inequality, and suggest that lack of concern for truth is a main factor.
Donation requested, but no one will be turned away for inequality of funds.

Phone-in Reading Group on Dunayevskaya’s Marxism and Freedom
Beginning Monday Feb. 17 at 8:00 p.m. EST, we’ll have 10 weekly sessions of no more than two hours, covering about 30 pages in each.  Please write to us at mhi@marxisthumanistinitiative.org if you want to take part so we can keep you informed of the plans and give you the phone number to use (not MHI’s phone). People who are outside the U.S. should consult us immediately so we can enable them to participate.

Can Redistribution Solve Capitalism’s Crises?
A public roundtable conversation, co-sponsored by Marxist-Humanist Initiative  and Internationalist Perspective, will critically examine proposals to redistribute income and wealth that are currently popular in “Marxist,” social democratic, and left-Keynesian circles. Discussants will address the questions: Can redistribution make capitalism “fair”? Can it prevent repeated economic crises? Does inequality cause crises and poverty? If not, what are the causes? Can capitalism be reformed to make it serve human needs? If not, what is the alternative?
Discussants: Andrew Kliman, Anne Jaclard, Mac Intosh, and Sander
At Bluestockings bookstore, fair trade cafe, and activist center in the Lower East Side of Manhattan.  172 Allen Street between Stanton and Rivington, south of Houston St. (212) 777.6028
Dec 2, 2013
New York, NY 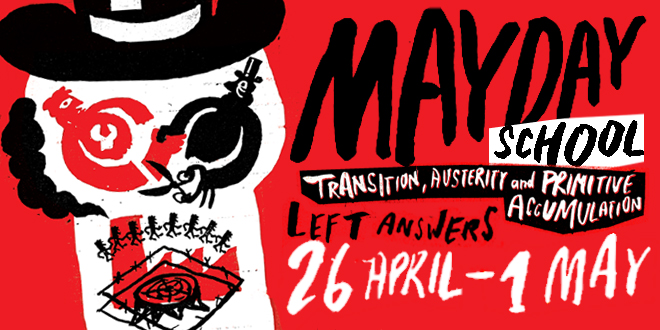 “The Impasse in Movements for Social Change and the Need for ‘Organization of Thought’”
MHI Public Meeting via telephone conferencing
January 23, 2013
New York, NY

“What Must Be Changed In Order to Transcend Capitalism”
Forum organized by The Commune and MHI
July 5, 2010
London, UK

“Swedish ‘Socialism’: Not What It Used to Be, But Then Again It Never Was”
MHI Public Meeting
November 4, 2009
New York, NY

“Theorizing Women’s Liberation Before, During, and After the Revolution”
Anarchist Book Fair
April 12, 2008
New York, NY