Editor’s note: We are pleased to announce that the garment workers whose story we published in February have won their strike. This is their press release, posted here. See the end of the page for how to donate to the workers’ May Day strike fund. — MHI

After more than two weeks of striking, workers and union members of SOTA at H&H Textiles factory returned to work this morning.

The workers went on strike because of incessant harassment, intimidation and arbitrary firings for union members. As part of this effort, management writes up workers with “derogatory letters” to justify unjust firings. For example, if a worker took a bathroom break, a manager could say, “You took too long,” and issue them a letter. Once a worker accumulates enough bogus letters, the letters are used to warrant firings. 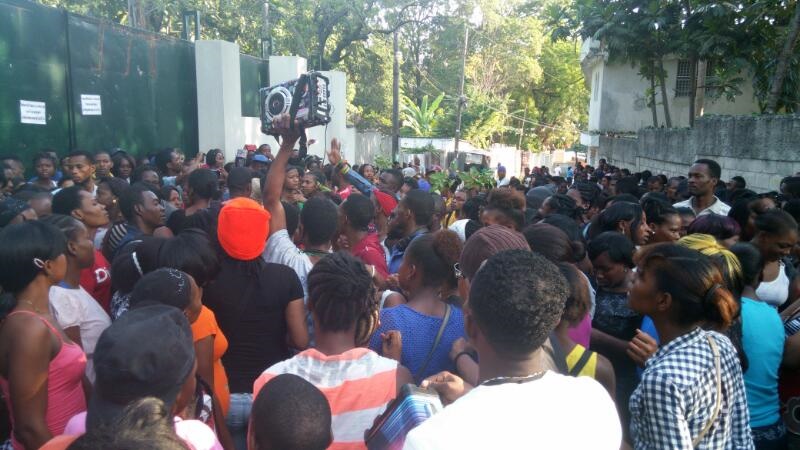 Production manager Mrs. Khan has been especially brutal in her harassment of union members, often head-butting workers. Many of the songs and chants during the strike included her, “We do not want Khan. She must go,” and “Down with Madam Khan.”

Also, the production quotas at all the factories are set incredibly high. They are often unattainable and prevent workers from receiving the minimum wage… because they are often paid by how much they produce, rather than how many hours they work.

Here is a direct message from SOTA after the negotiations:
(Translated from Kreyol)

Ok, we reached a consensus to return to work tomorrow, Wednesday, April 19. On Thursday we will meet with management to confirm their agreement with the minister of labor regarding:

1. The reinstatement of the fired workers

2. No firing after the strike

4. Payment of the legal strike days

6. As for Mrs. Khan, she does not have the right to dismiss or fire workers anymore.

Initially, H&H management refused to concede anything to the workers. So this is a big step for the workers!

Now, we will see if H&H management follows through on the agreement.

The reality is that words on paper often don’t come to life. For instance, unions and union rights are completely legal and recognized in state documents… but this very strike and the reasons for it show us the reality.

Garment workers continue to fight for their most basic legal rights.

International Call for Withdrawal of U.N. troops from Haiti

June 1, 2013: International Day to Call for the Withdrawal of MINUSTAH from Haiti Exactly 9 years ago, on 1 June 2004, military troops of the MINUSTAH, the United Nations Stabilization Mission in Haiti, invaded […]

New York City – After two weeks on the picket lines, the Communication Workers of America (CWA) ordered their striking members back to work at Verizon on Aug. 20—without a contract. Three members of CWA […]