Exclusive interview by MHI with Yanar Mohammed, president of the Organization of Women’s Freedom in Iraq (OWFI), which she co-founded shortly after the US invasion in 2003. 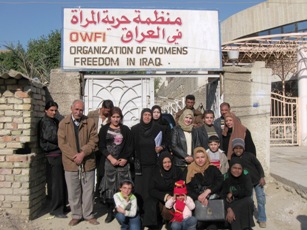 Iraq is fast becoming a forgotten story to the rest of the world, but women continue to be killed in the streets of Baghdad simply for being women. OWFI activists are still in constant danger of assassination by political Islamists. I still have to sleep in secret locations and travel with guards, and we need guards to protect our office. Fortunately, we share a building with the Federation of Workers Councils and Unions in Iraq (FWCUI), who support all our endeavors, events, and programs.

One of our new projects is organizing women workers to lay the groundwork for unionization, a joint project with FWCUI. Few women in Iraq are in unions, and most other unions have shown little interest in bringing them in. Our project, called “Women at Work,” consists at this stage of finding interested nurses in private hospitals and helping them learn leadership skills, so they are able to start preparatory committees toward unionization. They are now organizing for a nurses’ annual conference. We found some “experienced” women who were union leaders under Saddam, but they tend to be nationalistic or patriarchist; we want to help new left-leaning leaders to emerge.

In October, we started experimenting with airing programs on our new radio station. I am really excited about that, because radio and TV were so important to letting people know about OWFI and raising discussion on women’s rights in general. After the government censored OWFI on their affiliated TV stations, we begin to need our own media outlets. We are already swamped with applications from groups wanting to put on programs. Our rule is that all the material we broadcast must be secular, egalitarian and women-friendly.  It is important to move the material people hear to the left, that they  hear something besides the religious programs that are all there is on the radio now.

We recently completed an anti-trafficking report that made a big splash. The study detailed the huge trafficking networks in Iraq who kidnap and smuggle girls and women to other countries where they are sold into prostitution. One line of trafficking takes girls ages 11 to 15, who are considered especially desirable in some other countries. We wrote a big report, and then we didn’t know what to do with it, because the Iraqi government will not admit this problem exists. When we sent an OWFI activist out of the country to announce the report on a TV station, the Iraqi government spent the next three days denouncing us on its television station, Al Iraqia. They kept showing a picture of “the woman who calls Iraqi women prostitutes,” which of course makes her a clear target for the Islamists and nationalists.

The government often denounced us before, but the extent of this campaign seems disproportionate to our threat to it. In fact, people have warned us that if we do anything further with this report, we surely will be assassinated by the trafficking networks!

OWFI continues to publish our newspaper, “Equality,” and to run shelters and safe houses for women fleeing the threat of “honor” killings. We now have three secret safe houses in Baghdad and suburbs. They are run by teams of families whom we train.

OWFI is not involved in the coming national elections. Some members were going to run on slates of individuals under the slogan “freedom and equality,” but now they are not going to participate, since we read the newly legislated election law, which is tailored to bring forward religious and ethnic groups to have full control of their areas. The last election was completely dominated by parties formed on religious and ethnic bases, and look what has happened.

It is completely untrue that women or men have benefited from the more than six years of foreign occupation. For example, the new constitution contains Article 41, which allows Sharia law to supersede the previous family law known as the “personal status law.” Another example: unionization is still illegal for public sector workers, who are a large part of the workforce.

In terms of how we live, Baghdad buildings, which received normal electrical service before the invasion, since it receive electricity for only one hour in the morning and one hour at night. If you want electricity the rest of the time, you have to buy it at a high price from a private seller. Fuel of all kinds is as expensive as it is in New York-a taxi ride costs about the same. The condition of women has deteriorated greatly from the dangers of war, lack of security and ascendancy of political Islam, especially because so many girls no longer get an education. In fact, I estimate that twenty percent of OWFI members are illiterate, especially the younger women.

One Comment on “Iraqi Women Still Fighting for Freedom and Equality”

Private First Class Bradley Manning was sentenced to 35 years in prison on Aug. 21 for leaking more than 700,000 classified government files to WikiLeaks, an anti-secrecy organization that arranged their publication. Manning, a 25-year […]

The National Organization for the Iraqi Freedom Struggles (on the web at NO-IFS) sponsored the panel “Building Solidarity with Iraq’s Civil Resistance” at this year’s Left Forum.