MHI members in New York joined a Feb. 4 rally and march against U.S. sanctions and threats of war against Iran—but we went with a statement opposing Iran’s government as well as our own. Our flier was aimed at those anti-war and left groups who insist on not talking about the Iranian people’s struggle against their rulers; some of these groups even support the Islamic Republic outright, in spite of its long history of repressing Iranian workers, women, and students. Most recently, when millions took to the streets to protest the stolen election of 2009, many were imprisoned, tortured, and killed.

Our flier is below.

We responded to a call by Iranian activists in New York after they saw that their struggle for democracy and freedom was not going to be included in the demonstration against the U.S. government. This was after the official slogans for the Feb. 4 protest were designated as “No war, no sanctions, no intervention, no assassinations!” That would not have been so bad if it meant to condemn the Iranian government’s frequent assassinations of its citizens, but the reference was solely to the assassination of Iranian nuclear scientists, which have been widely reported to be the work of U.S. and Israeli agents. The Iranian activists explained that their government plays up U.S. left demonstrations as indicating support for the Ahmadinejad regime, using our actions to help it demoralize and isolate the dissident movement there.

We are happy to report that Iranians and their friends, including an Occupy Wall Street contingent, prevented the Feb. 4 protest from looking as if it only opposed the U.S. actions. We were a very visible presence at Times Square and the march to the U.N., with a lot of people carrying the Iranians’ signs saying “Peace, Justice, Democracy for Iran.”

We also chased away a reporter from the Iranian News Agency, whose camera man was of course shooting only the anti-U.S. signs and not ours. The reporter ran into the arms of the NYC cops for protection, and the cops decided he should leave! 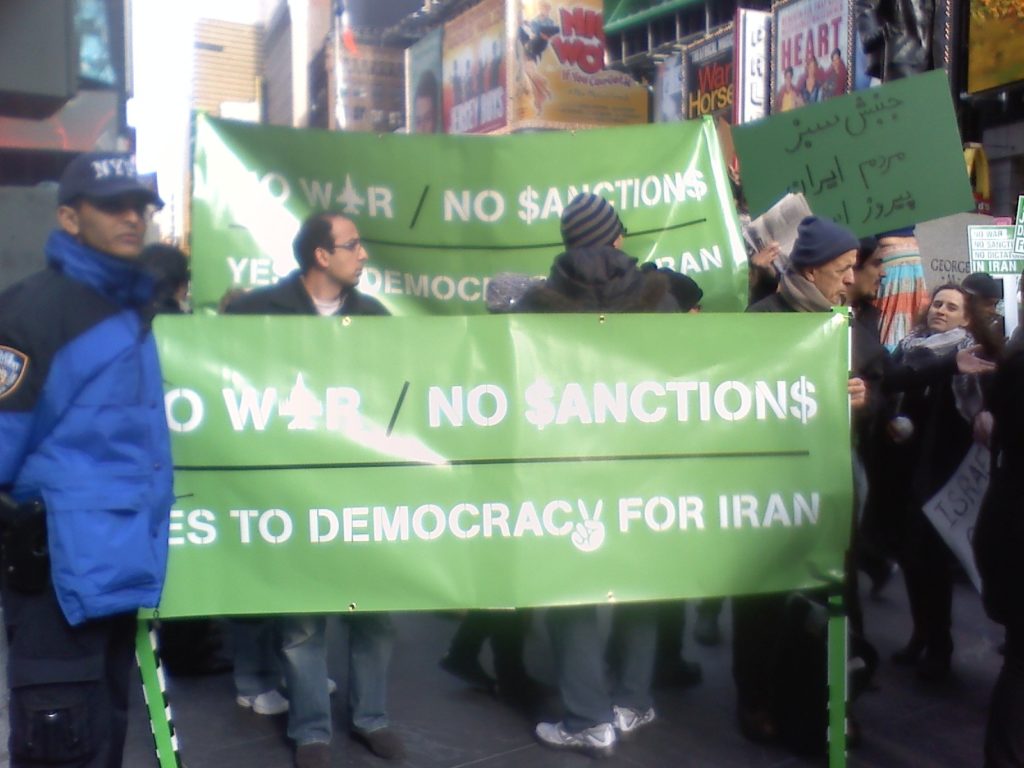 “We know the Iranian government manipulates the gatherings like this as evidence of support for the regime. We also know that some individuals and organizations in the anti-war movement have historically aligned themselves with the Iranian regime despite its violent suppression of its own people. The Iranian Green movement, Arab Spring, and Occupy movements have inspired us to seek a world in which are no longer victims of corruption, war, and exploitation.

“We stand in defense of the Iranian people’s right to democracy, human rights, economic, and social justice. In solidarity, we refuse to be the pawns of a broader struggle between the world’s elites who only seek to profit from our suffering.”

[Added Feb. 13: We have just learned that Green activists were physically attacked by people associated with one of the protest’s sponsors, the Workers World Party or its front group, International Action Committee. An Iranian Green had been invited by a representative of a different organization in the sponsoring coalition to speak at a rally that was held during the march to the U.N. , but when she began to speak about repression in Iran, some people began to yell to prevent her from being heard, and she was pushed from behind, nearly causing her to fall off the ladder being used by speakers. When another Green activist attempted to steady the ladder to protect her, he was bitten and kicked. Needless to say, MHI strongly condemns this repression within the so-called left.

Aside from those authoritarians, however, we heard that many anti-war activists who came to the protest, when they were were asked by the Greens to carry their signs supporting democracy in Iran as well as opposing war and sanctions, did so. That is what enabled us to be a large presence in the demonstration.]

According to a press release the next day by the organizers of the protest, there were simultaneous demonstrations in 30 states and six other countries “to protest the rising crescendo of threats against Iran.” The U.S. and Israel have been hinting that they may soon bomb Iran’s nuclear facilities (Obama says “all options are on the table”) on the grounds that Iran is close to producing a nuclear bomb and that the opportunity to destroy its facilities is limited. Iran denies that its nuclear production is for making bombs, and there is no available proof either way.

We don’t buy the knee-jerk anti-U.S. argument of some of the left that because the U.S. and Israel have nuclear arms, every other country has a right to have them too—on the contrary, we think no country has such a right. Meanwhile, we are very worried that attacking Iran militarily could set off war—even nuclear war––all over the region and the world.

These life-and-death issues were trivialized by some stupid signs at the demonstration, signs which called Wall Street and the banks “the real danger.” The next day, a major organizer of the demonstration, the International Action Center led by pro-Iran politicos, issued a press release. It claimed to quote an Iranian who came over to their position as saying, “Even many of those who have opposed the Iranian government are now seeing that their main enemy is U.S. imperialism.”

In contrast, here is our flier, containing excerpts from past editorials:

MHI Editorial: We Protest, We Condemn

NYC demonstration at the Federal Building against the FBI raids, Sept. 28       MHI demands the U.S. stop attacks on Left activists;   MHI calls on the Left to cease “lesser evil” politics […]

July 25 was a “Global Day of Action for Iran” that saw demonstrations in 110 cities around the world. Thousands marched to express solidarity with the protests in Iran against the fraudulent presidential election June […]