The protests discussed in Part II of Marxist-Humanist Initiative’s 2018 Perspectives illustrate an underlying dialectical issue. That is, the protests have two sides that are distinct, yet inseparable. Inseparability draws on the idea that there are conflicting interests at play, which depend on, and cannot be separated from, one another.

Part II of the 2018 Perspectives states:

Zombie protests in Houston mocked Trump’s refusal to kill the bill [that abolishes the Affordable Care Act], while highlighting the life-and-death nature of this issue. When this organic and creative campaign was countered by deplorable instances of police officers manhandling disabled peaceful protesters, … The various forms of protest showed the determination of ordinary people to defy Trump’s agenda.

When Trump responded to the murder in Charlottesville of anti-fascist protestor Heather Heyer by suggesting that Neo-Nazis and anti-fascist protestors were equally bad … There were protests against police murders and harassment of Black men and women, against judicial systems that never convict white cops for killing Black people; against monuments to the Confederacy … [p. 13, p. 14, emphases added]

The emphasised text illustrates the conflicting interests to which I refer. The first example in particular shows that peaceful protestors act in their own interest, which stand in direct opposition to the interests of those in power. This is why those in power ‘do not like’ or ‘accept’ the protestors’ interests. The response, therefore, is that those in power force their interests on the protestors—in this case with a blatant disregard for disability.

The latter examples illustrate conflicts that are actually important lessons from past centuries. First, Nazi ideas are built on the idea of chauvinism, i.e., the idea that one person (or group of people) is superior to another person (or group). This sense of superiority can take the extreme of open and violent—i.e., deadly—oppression of race, religion, a person’s geographic origin, etc. In this sense, the police murders of people of colour, and policemen getting away with it, is another example of deadly oppression, which could be called fascist. Second, the protests against Confederate monuments is a protest against slavery, which was an economic and political system built on the oppression of one group of people in society to sustain another group. The monuments commemorate and glorify this oppression. 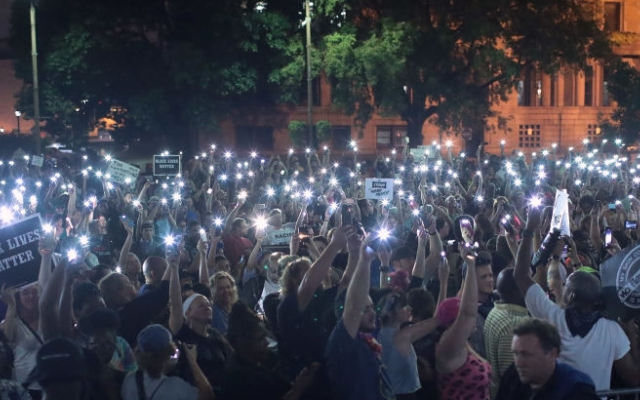 These conflicting interests are also inseparable from one another. This is because the conflicts do not arise from ill will on one or both sides, nor do these conflicts arise because of a lack of empathy. Instead, they are rooted in the different material conditions that the protestors and those in power represent. These conditions relate to how capitalist societies in general, and the capitalist mode of production in particular, functions. This would require some elaboration, which space in this short discussion does not permit. I will say only this: (i) the two opposing interests are inseparably connected through the material conditions that protestors and those in power represent; and (ii) the interests of those in power dominate the interests of the protestors.

The attributes ‘conflicting’ and ‘inseparable’ make these interests a dialectical matter. This means that neither side, i.e., neither the protestors nor those in power, are free. Why not, one might ask. After all, those in power represent (or themselves have) all the money to entertain their every need, so they are free! But this is not actually the case. The underlying material condition keep those in power in that position, and this position can only be maintained if the the domination of others continues. This ties those in power to their acts of domination, which they must protect at all costs. From a dialectical perspective, the interests tied to dominating others constitute a mutual un-freedom.

So people keep marching. For equality, for health care for all, against misogyny. The protests discussed in Part II of the 2018 perspectives ‘… showed that tens of millions of Americans are reaching for a different society, a society in which the interests of ordinary people come before the interests of those who dare to rule us, a society in which healthcare for all is a right’ (p.13). In other words, the ongoing protests show that people increasingly take matters into their own hands, i.e., that people increasingly think and act on their own behalf, without entrusting political parties or other representatives. These, as the ongoing protests show, do not act in people’s interest.

The only solution to this mutual un-freedom is to uproot the capitalist mode of producing value for its own sake, with the purpose of generating profit. This would not only free ‘just ordinary people’, but also those in power—because the need for domination would no longer exist, which would untie those in power from their acts of domination.

On Conducting Arguments in an Honest, Revolutionary Manner

Ravi Bali spells out what he thinks is necessary for an honest debate between revolutionaries and why the goal is not to win. […]

On Bezos’ Investment in Anti-Aging Biotech: a commentary

Francisco Palacios offers reflections on capitalists’ investment in expanding the lifespan of the human body beyond its natural limits. […]

Marxist-Humanist Initiative will sponsor a discussion on “The Economic Crisis and the Rise of the Xenophobic Right” on Sunday, 11 September, at 4.00 pm in Dragon Hall, 17 Stukeley Street, London, WC2B 5LT. The […]