The Lebanese state’s resolve to quash the uprising that began last October 17 has only grown since the formation of a new ‘technocratic’ government. This new, supposedly reformed, government was mobilised to placate protestors and the international community. Presented as ‘new blood’, the new cabinet members had no problem turning a blind eye to corruption when they were advisors in the ministries that some have recently inherited from their predecessors. Now they are, if anything, intensifying state repression of the protests even as they continue the old government’s policies.

Lacking the constitutionally required support from parliament (see discussion of this in my earlier article), their first order of business was to pass a 2020 budget inherited from the previous government. No adjustments were made to account for the woeful economic situation, thereby sending out a clear message that this government has no intention of changing anything.

The roads are not the only things that are forced open–so too are the skulls of protestors, many of them having learned the taste of a baton by now.

The army’s promise to protect the right to protest has long since faded. So too have the social media images of support that individual army members sent out. The sides of this struggle have been clearly demarcated by new concrete walls put up to claim back the public spaces that belonged to the people for the past 110-plus days.

Many are presenting this phase of the uprising as its death throes. However, with capital controls tightening, banks continuing to offload government bonds on international markets, and an unofficial exchange rate suggesting a one-third devaluation of the Lebanese Lira, mean that the crisis is nowhere near over. The protest movements will continue to adapt, as it has throughout the past four months. 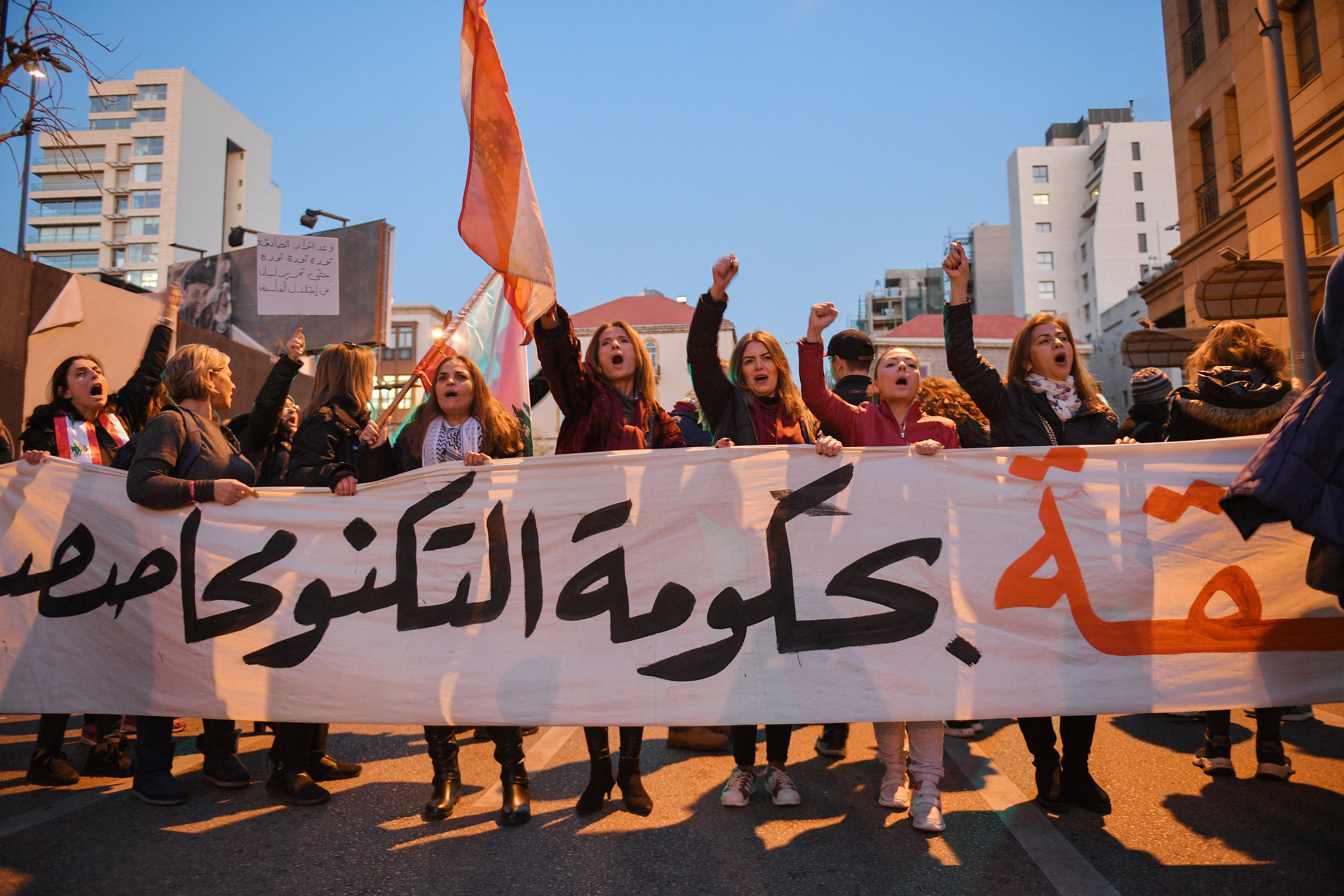 Failures of Political and Financial Reforms

During the first month of the uprising, the rhetoric was dominated by the so-called ‘civil movement’–a catch-all phrase referring to various reformist social groups, parties, and NGO’s that were positioning themselves in opposition to the ruling class. At the time, the uprising could be defined through 5 characteristics: Spontaneity and reactiveness, decentralization, leaderless, apolitical, and an embrace of current institutions. The ‘civil movement’ was able to dominate the rhetoric because they had accumulated previous experience in mobilising against the state through protest movements and electoral politics at the municipal and national level. They also had financial capabilities that allowed them to mobilize effectively. They gained dominance over the narrative of the uprising and helped mold demands into four major ones:

The first goal was achieved within the first 10 days of the uprising (October 29). From then on, Lebanon’s state was run by the same ministers, but in caretaker capacities until the formation of the new government on January 21 of this year.

In this nearly three months of political vacuum, the banking sector, through the Association of Banks in Lebanon, continued to implement illegal and increasingly harsh capital controls, limiting people’s access to cash in both US dollars and Lebanese Lira (the LL is pegged to the USD). A black market for currency exchange developed and has now been legitimized through the Lebanese Money Changers Association, who have promised to hold the black-market rate at 33% devaluation. Large bank account holders (the rich) were also able to make massive withdrawals and international transfers, making it clear that capital controls applied only to the poor. Coupled with the currency shortage caused by a fall in USD income (through exports and foreign deposits), it seems more and more likely that the foreign currency savings of the average citizen is what’s going to be used to bail out the Lebanese government.

In addition to these financial issues, suppression from traditional party supporters, i.e., supporters of the state, continued to take the shape of regular ‘incursions’ into the public squares where protestors have established a semi-permanent presence. The incursions lead to the burning of tents and icons as well as the beating of anyone found there.

Some commentators have noted that, absent the political ‘vacuum’, none of these financial measures could have taken place, leading them to believe that the ‘vacuum’ was anything but that–in fact, it was the new mode of governance. It was only once these measures were in place that a new government magically materialized.

The new government (government in Lebanon refers to the process of nominating a new Prime Minister and the allocation of ministerial portfolios) was 30% smaller than the last one and consisted of ‘new faces’, politicians who were previously in the background operating as advisors, with some technocrats. The new government was presented as one that met the protestors’ second demand, and it placated many protestors who believed that then-new government should be given a chance.

Failure of Ruling Class to Unite, Failure of Protests to Win Demands

One thing the new government has not been able to do, however, is to unite the ruling class. Several major parties have refused to participate in the government due to their rejection of the PM, Hassan Diab. This has earned this government the name of ‘one colour’.

Where some may see this as a fracturing of the ruling class’ ability to practice hegemony, a more correct interpretation of this government would be that its objective is to ease things back into normalcy. With the claim that this government is of ‘one colour’, a return to the rhetoric of sectarian factionalism and representation can slowly re-dominate the narrative of this uprising and ease people back into that political norm.

The formation of this government has also signalled to protestors that, even though two previously nominated PM’s were rejected, the ruling class can push things through if they really want to, without any obligation to heed the warnings of protestors or comply with their demands.

It is for this reason that the third and fourth demands of the protestors have virtually disappeared. There is now a feeling that the uprising has returned to square one, or demand one.

New Participants and a ‘Week of Anger’

Before the most recent lull, some promising developments had been noted in the uprising. With the failure of the ‘civil movement’ to reach its intended goal, people have started to take things into their own hands.

Direct action was taken up by a few groups who began staging sit-ins at banks until individuals could make withdrawals. New labour groups are also emerging, most notably an alternative union for journalists and a new Professionals Association. Additionally, a group of lawyers have formed a committee to defend protestors’ rights.

The language of the uprising is also changing. Where during the first month and a half it was largely non-violent and conciliatory with business and the army, worsening economic conditions led to the proletarianization of the movements. As such, class-based rhetoric is moving to centre stage and violence against property is back on the menu. This shift in rhetoric has also opened the door to the broader participation of citizens, most of whom were previously alienated by the inclusiveness of the ‘civil movement’ and its disavowal of violence against property.

Violence culminated in the declaration of a ‘week of anger’ in mid-January, an uptick in civil disobedience that included blocking roads, marches, and protests in front of key government institutions. Banks were vandalized, their windows smashed in and security cameras destroyed. Confrontations also escalated in Beirut’s main square, as protestors tried to breach barricades set up to keep them away from the parliament.

During these days, the repression of the state was at levels unseen before. There was extensive use of tear-gas, often fired directly at protestors, resulting in many injuries. Most violent has been the intentional targeting of protestors’ heads, leading to many protestors losing an eye (tear gas is meant to be fired at a high angle, based on international law). This has been accompanied by random arrests, police beatings, and torture in prison, along with the loss of rights such as a first call. Since the week of anger was called, more than 500 protestors have been injured.

Most notably, for the first time since the beginning of the uprising, it was the security forces that burned down protestors’ tents in squares, rather than government party supporters. It is clear that the state was taking matters into its own hands.

Following this brutal crackdown, the protest movement is no longer at the same level of intensity. The latitude for direct action at banks has also been reduced by the police force now acting as personal guards for banks that are illegally withholding people’s money.

Nevertheless, mass mobilisations are still found during weekends, and protest marches are a regular presence in various areas. Additionally, ‘revolutionary tents’ set up in various regions are providing new ways of organizing through popular, albeit small, councils.

If this uprising has taught us anything, it’s that it is capable of re-energizing and re-orienting itself based on the barriers it faces. With no break in sight in the worsening economic conditions, we can count on the uprising to find new allies and new forms of resistance, without being held back by illusions of reform.

Jade Saab is a Lebanese/Canadian writer based in Scotland. He is working toward a PhD at the University of Glasgow on the topic of ideology and the process of socialist revolutions. He keeps an active blog at https://jadesaab.com/

Should the UK leave the European Union? Differing Ideas about the Coming Vote

Editors’ Note: MHI, which takes no position on this question, publishes here two detailed analyses of the case for remaining in the European Union (EU), the case for leaving it–known as Brexit—and the reasons for […]

“Uprising in Lebanon Aims to Replace Entire Political System.” Jade Saab asks, “Does Lebanon’s Revolution have what it takes to change the entire legal and political system?” […]