Nicaraguans have been protesting the policies of their increasingly repressive government since April, when drastic cuts in social security for pensioners were announced at the same time that the money withheld from employed people’s salaries was increased. Protests in Managua were met with violence that soon escalated in the universities, where anti-government demonstrators were attacked by pro-government students and the police. To date, dozens of people have been killed in the government’s crack-down on the protests, and many more have been imprisoned.

The horror of the continuing conflict is compounded by the fact that President Daniel Ortega was a leader of the 1979 revolution that overthrew the Somoza dictatorship. Over the years, Ortega and his Sandinista Party have become increasingly authoritarian and anti-worker. The party is backed by organized Sandinista youth, who formerly dominated university politics and who are now fighting the new student opposition movements.

The violence began on April 18, when a group of elderly retirees protested against cuts in their pensions by the Institute of Social Security (INSS). Their demonstration was peaceful, that is, they did not carry arms, only the blue and white flag of Nicaragua. Suddenly, the Sandinista youth and the national police began to attack them, resulting in many people being beaten and  injured. It struck the hearts of many Nicaraguans to see the elderly fighting for their rights and being assaulted.

The next day, April 19, young people joined the peaceful protests. Many students protested on their university campuses. Demonstrators were again attacked by the riot police, Sandinista youth, and national police. The police used tear gas bombs, rubber bullets, and lead bullets. The protesting students built barricades and used artisanal arms (small morters used for religion celebrations, known as morteros, which are no match for real weapons). 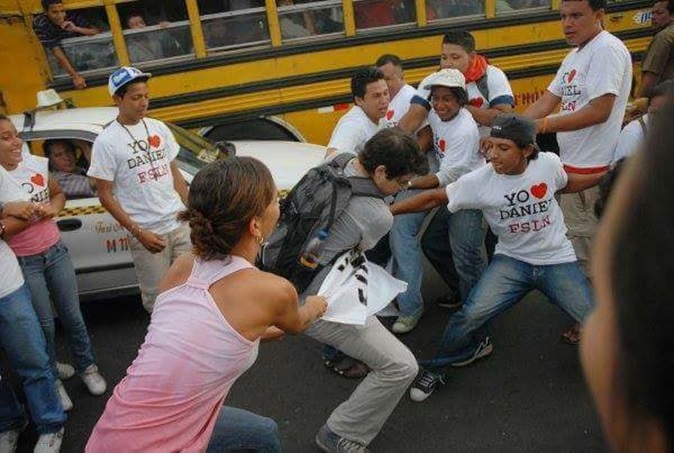 This picture shows clearly that the Sandinista youth were the aggressors in the clashes, attacking the university students and citizens who protested.

The demonstrations were not only over the cuts in social security for the elderly and increases in payments from employees, but also over all, abuses of power by the Ortega government. These include election fraud and the selection of Ortega’s wife as vice-president. The newly empowered, unpopular Rosario Murillo called the protesters criminals, tiny groups, delinquents and vandals.

In three days, 63 university students were murdered, nine lost one of their eyes, others were also injured, and a lot of people went missing. About 200 were arrested and sent to La Modelo jail, where they were tortured and charged as delinquents. They were helped by some prisoners, who gave them food, clothing and water. Those prisoners reported that they were later tortured for helping the protesters.

Now there are three groups of protesting organizations: University Student Movement April 19, which has maintained the protest at the Polytechnic University; the “self-convened” who have organized through social networks; and the Movement for Democracy, a peasant movement that fought the peasants’ dispossession from their land when the government wanted to create a canal similar to the one in Panama. These groups have marched to honor the dead and demand justice for the people who have died.

The university students are from four universities: Central American University (UCA), Engineering University (UNI), National Agrarian University (UNA) and Polytechnic University of Nicaragua (UPOLI).  The students have united and now their struggle is to remove the Organization of University Students UNEN, who are members of FSLN (Sandinistas). They have often committed election fraud, or offered scholarships, food vouchers, and photocopies to students to make them sympathizers, and who have done away with all university leaders who wished to represent the students with dignity.

The other demands of the population are for free and transparent elections, no more abuses of power such as the President’s control of the National Assembly, the National Police, the Army and the Supreme Court of Justice, that is, all the powers of the nation. Due to high prices, there is also a social-economic crisis fueling the protests.

Many cities have joined the protests, such as Catarina, Monimbó and Niquinohomo, where General Sandino was born. These cities have always fought for freedom, as they did during the 1970s in the struggle against General Somoza.

The government has called for dialogue to stop the protests, but at the same time they send soldiers and police to kill the protesters.

Editor’s notes: The author is on the scene. According to a CNN report on June 16, 2018, “Ortega’s government later revoked the controversial pension reform a few days after protests broke out, but the unrest continues throughout the Central American nation. The Nicaraguan government has put the death toll at 34, but the Center for Human Rights says at least 170 people have been killed as of Friday [June 15].”

Other news reports on a one-day general strike on Thurs. June 14, which closed down the city of Managua. Now the government is in negotiations with opposition groups over whether Ortega must exit the presidency.

We do not know what will happen next. We do not have opposition leaders; every one of the old ones accommodated themselves to the Ortega regime. Now there are many courageous young people with leadership qualities among the protesters, but they are very young.

Facebook is consider like the new gun these days. It is not allowed for many workers to share or give opinions. That is why the government cut the Wifi that they had installed in the parks.

My friends who work for the government or belong to the Sandinista party check with me that I have been receiving information they send me on Facebook about Venezuela and now about Nicaragua. They tell me I should read what they send me, but that I can’t respond.

This is not what we made the revolution for.

Nicaraguan Government Continues Slaughter of Students & Others in Revolt

La Nica sends MHI a second in-person report on the continued repression and killing by the Nicaraguan government against its people–including her murdered neighbor. […]

Show your support for the struggles of Brazilian youth and workers!

As you are surely following in the news, the struggle of youth and workers against the increasing of the bus fare and police repression has taken over São Paulo and other major cities in Brazil.