***International Orders For All Items Below***

All PayPal buttons on this page are for orders within the United States only, unless marked otherwise. For international orders, please 1) contact us at mhi@marxisthumanistinitiative.org for shipping rates before placing an order, and then 2) use the yellow button immediately below to make the payment to MHI. 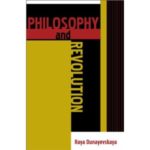 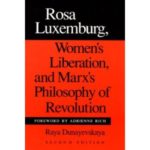 Marxism and Freedom, from 1776 Until Today (first edition New York: Bookman Assoc.1958; latest edition Amherst, NY: Humanity Books). In her first book, Dunayevskaya relates the 18-19th century industrial, social-political and intellectual revolutions to the development of revolutionary thought; presents Marx’s 1844 humanist essays (the first edition included the first English translations); four chapters contain her seminal interpretations of aspects of Marx’s Capital; gives her analysis of the Russian Revolution’s transformation into state-capitalism; and ends with chapters on automation and Maoism (the last added in 1964). Includes the first edition’s introduction by Herbert Marcuse and later introductions by the author.

Philosophy and Revolution: From Hegel to Sartre, and from Marx to Mao (first edition New York: Dellacort/Dell Publishing 1973, latest edition Lanham, MD: Lexington Books). Dunayevskaya’s second book traces the revolutionary philosophy of Hegel, including her interpretation of “absolute negativity as new beginning;” and highlights of Marx’s “new continent of thought;” and Lenin’s “philosophic ambivalence.” She then examines the theories of Trotsky, Mao and Sartre, and finally the “economic reality and dialectics of liberation in the 1960s-1970s revolts in Africa, Eastern Europe and the U.S. Includes an introduction by Erich Fromm and additional material from her work in the 1980s.

Rosa Luxemburg, Women’s Liberation and Marx’s Philosophy of Revolution (first edition Humanities Press: Atlantic Highlands, NJ 1983, latest edition U. of Ilinois Press: Urbana and Chicago). Hoping the women’s liberation movement would delve into theory, Dunayevskaya introduced Luxemburg’s then-unknown feminist dimension. The book also includes a critique of Luxemburg’s theories of accumulation of capital—a matter still hotly contested today. The second section gives highlights of the history of the women’s movement “as revolutionary force and reason;” the third revisits Marx from his earliest to last works, including his Critique of the Gotha Program, which the author sees pointing a direction for our time. Includes a forward by Adrienne Rich. $25 plus shipping in the U.S.

Women’s Liberation and the Dialectics of Revolution: Reaching for the Future (Wayne State U. Press: Detroit, MI 1985). The last book edited by Dunayevskaya, this collection of short pieces about women’s thought and activity, mostly from the 1950s to the 1980s, reveals the development of her own thinking into the philosophy of Marxist-Humanism. It takes up miners’ wives and women in the work force, African-American women from slavery to the feminist movement, and women in revolts and revolutions in Russia, Iran, Portugal, Poland, China and more. Good book for classes on feminism as well as for seeing her philosophy in action. $25 plus shipping in the U.S.

American Civilization on Trial: Black Masses as Vanguard. Originally published in 1963 on the occasion of the historic March on Washington, this pamphlet was taught in “freedom schools” during the Civil Rights Movement.It traces the radical history of the U.S. by showing the times when mass movements of African-Americans and those of white workers united and created turning points in history. Dunayevskaya considered this work as foundational to Marxist-Humanism in the U.S. Includes later additions by Dunayevskaya and Charles Denby. 117 pages. $8.00 plus shipping in the U.S.

The Philosophic Moment of Marxist-Humanism: Two Historic-Philosophic Writings by Raya Dunayevskaya. Her 1953 Letters on Hegel’s Absolutes, in which she discerns a dual movement from theory and from practice, plus her final 1987 draft presentation on organization and philosophy. 52 pages. $4.00 plus shipping in the U.S.

Nationalism, Communism, Marxist Humanism and the Afro-Asian Revolutions. Dunayevskaya’s 1961 summing up of the Third World Revolutions to date and the pitfalls that awaited them: the world market and politics, bureaucratization, and ideas ranging from Pan Africanism to Trotskyism. Includes her 1984 introduction taking up the recent revolutions in Iran and Grenada. 34 pages. $4.00 plus shipping in the U.S.

The Coal Miners’ General Strike of 1949-50 and the Birth of Marxist-Humanism in the U.S.Story of the workers’ self-organization, plus Dunayevskaya’s 1983 essay, “The Emergence of a New Movement from Practice that is Itself a Form of Theory.” Includes correspondence with C.L.R. James and Grace Lee Boggs.45 pages. $4.00 plus shipping in the U.S.

Marx’s Capital and Today’s Global Crises. In 1978, Dunayevskaya reprinted the chapters on Capital from Marxism and Freedom along with new critiques of Ernest Mandel and Tony Cliff, and a preface by the Scottish Marxist-Humanist Harry McShane. 108 pages.
WE ARE OUT OF STOCK, sorry. However, you can buy Marxism and Freedom and you can find digital versions of the two additional essays in this pamphlet on our Archives page under her writings from 1977 and l978.

Marxist-Humanist Writings on the Middle East. This 2003 publication includes selected writings by Dunayevskaya from 1961-1982 and a bibliography of more on the Middle East, along with later pieces by members of the organization she founded. 78 pages. $8.00 plus shipping in the U.S.

Guide to the Raya Dunayevskaya Collection in the Wayne State University Archives of Labor and Urban Affairs, Detroit. Dunayevskaya donated her archives in 12 volumes, and prepared this guide containing introductions and descriptions, making research easy. $8.00 plus shipping in the U.S.

A Guide to the Supplement to the collection at Wayne State University was also published. Two more volumes were donated after her death; they include her last writings and additional writings around her books. $8.00 plus shipping in the U.S.

The Marxist-Humanist Theory of State-Capitalism: Selected Writings by Raya Dunayevskaya. This collection contains excerpts from her seminal 1940s analyses of the Soviet Union through some 1986 political-economic analyses of world capitalism. But to see her systematic analysis of state-capitalism, the chapters in Marxism and Freedom are better.
WE ARE OUT OF STOCK, sorry.

Power of Negativity: Selected Writings on the Dialectic in Hegel and Marx by Raya Dunayevskaya. Edited by Peter Hudis and Kevin B. Anderson. This collection starts with her 1953 philosophic breakthrough on the contemporary meaning of Hegel’s Absolutes: two letters she termed “the birth of Marxist-Humanism” and returned to throughout her life in order to plumb dialectics in many fora (also available in a pamphlet). It includes her notes on some of Hegel’s major works; correspondence with Marcuse, Fromm, Denby and others; talks and essays on the dialectic at work in contemporary mass movements for freedom; and commentary on the dialectic in the works of Marx, Lenin, Frantz Fanon, Lukacs, Korsch, and others. $25.00 plus shipping in the U.S.

Please note: MHI does not entirely agree with the selections, editing, and introductions of these two collections.

Some  of Raya Dunayevskaya’s works are available in Spanish, German, French, Italian, Persian, Chinese, Russian, Czech, and Japanese. For details please contact us at mhi@marxisthumanistinitiative.org.

MHI now features a page of Archives of Marxist-Humanism. It contains writings by Raya Dunayevskaya and others. More material will be added in the future.

Dunayevskaya’s books are not digitized; they are described on our Literature page, along with some pamphlets and works by others that are available for purchase.

We hope that the writings she selected and donated to Wayne State University, Archives of Labor and Urban Affairs, Walter P. Reuther Library in Detroit, will soon be digitized. They are currently available, on microfilm, in some libraries and can be purchased from WSU. An incomplete guide to the WSU collection is available on-line, and complete guides are available from MHI.

In the U.S., payment may be made by PayPal. Alternatively, a check or money order made out to MHI may be sent to: MHI, P.O. Box 414, Planetarium Station, New York, NY 10024. Please be sure to include your name, shipping address, and an e-mail address or phone number along with the title(s) you wish to purchase.
For international orders, please contact us at mhi@marxisthumanistinitiative.org.