The verdict is in! On April 20, after deliberating for less than 12 hours, a Minneapolis jury returned a verdict of guilty on all three counts of murder and manslaughter against Derek Chauvin in the death of George Floyd last May. Multi-racial crowds of activists, many who had protested the killing for the past 11 months, celebrated the verdict in the streets and around the country.

The whole world saw videos of Chauvin’s deliberate, horrendous torture and killing of George Floyd. Floyd’s cries of “I can’t breathe” followed and preceded similar killings around the country, and the rate of killing Black men and children seems only to have increased lately. A few days before the long trial ended, Daunte Wright was shot and killed by a cop in nearby Brooklyn Center, Minnesota. He was unarmed and had his hands up.

What will be the most enduring image from the televised trial is the final one: Chauvin stands and turns, puts his hands together behind his back, and waits while a court officer puts handcuffs on him and leads him away to prison. This image must have put fear in the heart of every policeman in the country. It certainly must give hope to Black Lives Matter (BLM) movements everywhere. 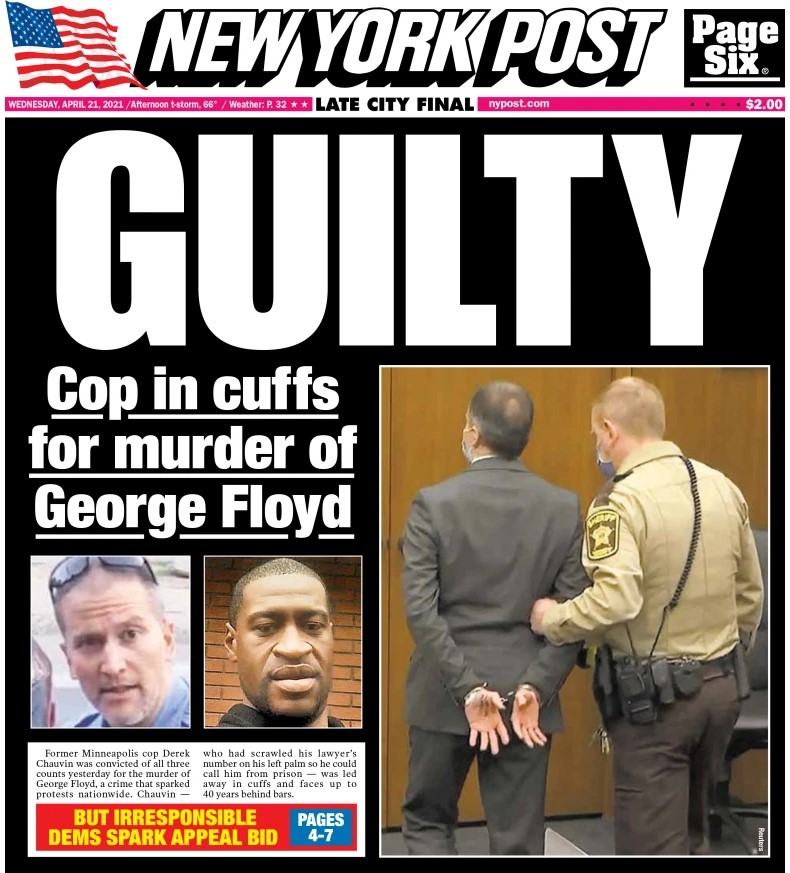 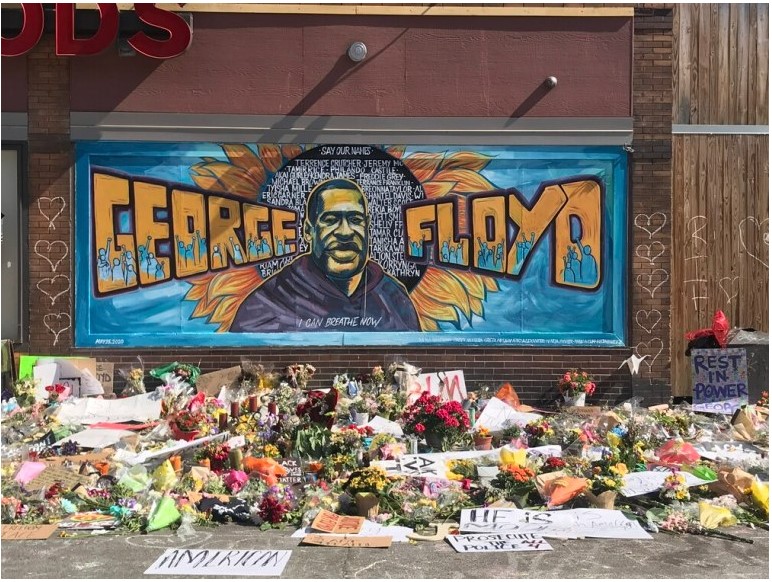 As Chauvin was led away, outside the courthouse and in George Floyd Square (the intersection where the murder took place, which protesters turned into a memorial and occupied for months), crowds of Black and white citizens listened on their phones to the judge reading the three guilty verdicts. They shouted, hugged, and wept for joy. One young Black woman told a reporter who asked how she felt, “I can breathe now.”

We expect this singular conviction, when most police murderers aren’t even charged with their crimes and are almost never convicted, will energize the Black Lives Matter movement. We may see another summer of mass protests, as the movement confronts a rash of new killings, seemingly every day.

The verdicts were hailed by House Speaker Pelosi, President Biden, Vice-President Harris, and many other officials. The governor of Minnesota sent away the National Guard troops he had called out in anticipation of riots, were Chauvin to be acquitted. There is much talk about the police reform bill currently in Congress, which the Republicans will never allow to pass. Meanwhile, right-wing, Trumpist attacks on the verdict are reaching a crescendo.

There is no doubt that this verdict is a victory for the BLM movement. Without the pressure brought to bear from the nationwide and worldwide solidarity mobilizations in the streets over the past year, this case would very likely have ended, like most others before it, with an acquittal. Hopefully, this experience and the movement’s increased self-confidence will impel more momentum and pressure from below for trials and reforms to come.

That is reason for celebration now and optimism going forward. So is the fact that the “blue wall of silence” (the unwritten code of police self-protection) was broken in this case, with police officials testifying on behalf of the prosecution. This could be a breakthrough in establishing some police accountability. The so-called “few bad cops” can no longer assume they can act with impunity.

But does this rare conviction of a cop amount to justice for four centuries of abuse of black people in the US? No way.

Is this one conviction a solution to police brutality? No, this legal victory was built on extraordinary resources that the state put into the prosecution, and on a chance occurrence––a teenager, Darnella Frazier, was passing by the scene of the murder as it was taking place, and she videoed it on her phone, as did others who stopped to bear witness.

The onlookers formed what Chauvin’s defense depicted as an unruly and threatening Black mob that distracted Chauvin. They were in fact a few Black and white people who shouted and pleaded with Chauvin to stop, as he pressed his knee into Floyd’s neck for nearly 10 minutes, in broad daylight on a busy street. Several of the onlookers testified at the trial, and their compassionate humanity contrasted sharply with the cops’ arrogant demeanors.  The cops’ real motives for brutality, it seems, are control and domination over “the community.”

Nor was the defense able to obscure the cause of his death by putting Floyd on trial for his drug use, as it tried to do. Only in America would a murdered Black man be the one on trial for a good deal of the proceedings, instead of the murderer. The defense pulled out every racist trope there is. The jury didn’t buy it.

Despite the prosecutors’ claim that their prosecution of Chauvin was “pro-police” because it was simply the prosecution of a single “bad apple,” the actions of Chauvin and the other cops cannot be delinked from the function of the police in capitalist society. Their function is not to “serve and protect” the masses. Rather, the police are instruments to protect capitalist property and, to do that effectively, they must surveil, harass, and crush any and all challenges to the system, whether real or potential.

While there is no doubt that “police reforms” are legitimately demanded by the Black masses, popular reforms like sensitivity training and community review do not go deep or wide enough, because they fail to grapple with the fact that police violence is a major feature, and not an exception, in policing. An actual end to police brutality will only come with the end of policing as we know it. And that will only come with a thoroughgoing revolution in society.

Minneapolis After the Third Precinct: the BLM Uprising a Year Later

One year after the police murder of George Floyd, Gabriel Donnelly traces the course of the Black Lives Matter movement’s demand to defund the police, and contrasts what has actually happened to the logic of the mass revolt. […]

The BLM movement is a potential turning point in US history, because of its multiracial character. Cops and white supremacists must pay a substantial price for their crimes. The Left needs to repudiate “color-blind” populism. […]

MHI’s writers report on the week of uprisings following the police murder of George Floyd in Minneapolis, from five other US cities. […]