On April 6, the Washington Post and Kaiser Family Foundation released a poll that provides the first quantitative look at the Resistance—how big it is, who is in it, what their major concerns are, and so forth. Unfortunately, the poll numbers have to be interpreted with great care, because the poll was not about the Resistance as such, nor even about “protesters,” though some of the news media have characterized it that way.

It was about “rallygoers” in the US—people “who attended a political rally, speech or campaign event[,] or an organized protest, march or demonstration[,] in the past two years.” So people who attended a Trump rally are lumped together with the millions of Women’s March protestors, and those who gave their congresspeople hell at townhall meetings, and those who rushed to airports to oppose the Muslim Ban.

The widely-reported figure from the poll that only 70% of “rallygoers” disapprove of Trump as president, while 30% approve, therefore does not mean that 3 of the 10 people in your immediate vicinity at a Women’s March were hopelessly confused, nor even that there has been a groundswell of pro-Trump grassroots activism. It is extremely likely that the vast majority of protesters disapproves of Trump, while the 30% who approve of him are people who attended his or other Republican campaign events, or anti-abortion or National Rifle Association (NRA) events.

If the Washington Post and Kaiser Family Foundation had published the “cross-tabulations” that tell us the percentage of one subgroup that belong to another subgroup—for example, what percentage of participants in a Women’s March are also people who disapprove of Trump—we could have gleaned a lot more. Unfortunately, they have thus far published only the poll’s “topline” results, which provide little information on the relations between subgroups. I hope they will publish the cross-tabs soon.

Another limitation of the poll is that it was conducted in January and February of this year. It therefore fails to reflect the huge participation in the recent March for Our Lives and other anti-NRA activity.

That said, there is some important information that the poll does provide.

It found that 20% of adult Americans have been “rallygoers” during the past two years. US Census Bureau data indicate that 20% of the US adult population is about 50 million people.[1] Since 70% of these 50 million “rallygoers” disapprove of Trump, and almost 9 out of 10 who disapprove of him “strongly disapprove,” there seems to be an active Resistance of about 30 million or so Americans—the “rallygoers” who strongly disapprove, minus a million or so who possibly attended a Democratic or Green campaign event or speech but not a protest.[2] In contrast, the poll results indicate that about 9.5 million people attended a pro-Trump event.

It is true that the poll numbers imply that only about 16 million people attended “an event in opposition to Donald Trump,” so my estimate of 30 million in active Resistance may seem to be a great exaggeration. However, a great deal of the Resistance to Trumpism in the streets and airports and town halls has not been explicitly and directly about Trump. The explicit themes of most protests have been about something else—women’s rights, the Muslim ban, immigrants’ rights, Obamacare, police violence, “alt-right” fascism, LGBT rights, climate change, science/truth, the minimum wage, and so on. 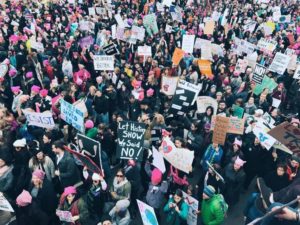 For example, the poll found that a remarkable 46% of “rallygoers”—about 23 million Americans—participated in an event “in support of women’s rights.” And the poll numbers imply that between 13 million and 16 million people participated in events about at least one of the following issues: the environment, immigration, LGBT issues, Obamacare, and police conduct.

It is therefore quite likely that a large percentage of protesters characterized their activity in terms of one or another particular protest theme, rather than as opposition to Trump as such. This could easily account for the discrepancy between a Resistance of 30 million and attendance at events “in opposition to Donald Trump” of 16 million.

The distinction between “opposition to Donald Trump” and other forms of Resistance activity is basically illusory. Apart from Republican campaign events, and anti-abortion and NRA activity, almost all of the protest is indirectly, if not directly, in opposition to Trumpism. As we noted in the 2018 Marxist-Humanist Perspectives (p. 16), “[t]here is indisputable evidence of the intermerging of issues within the Resistance movement.” Only the liars in the Trump administration could pretend that the millions who poured out for the Women’s marches the day after his inauguration were demonstrating “only” for women’s rights,[3] and not “also” against the Pussy-Grabber-in-Chief who wants to punish women who have an abortion and the rest of his authoritarian, xenophobic, and retrogressive agenda.

Similarly, although the recent participants in the March for Our Lives and similar activities are explicitly non-partisan and concerned “only” about safe schools, they are going after one of Trump’s main backers—the NRA—tooth-and-nail. And Parkland student David Hogg, a leader of these protests, told Trump in a widely broadcast comment that “[y]ou sicken me.”

He is far from the only one sickened by Trump.  In addition to the 30 million in active resistance to Trumpism, there are another 73 to 99 million Americans who also “strongly disapprove” of Trump. And millions of people abroad have stood in solidarity with the Resistance. The Resistance is already the first truly mass movement in the US since the 1960s, and its potential size is colossal. If it withstands attempts by elements of the Democratic Party to co-opt it, and attempts by the soft-on-Trump “left” to thwart it, it can certainly prevent the descent of the US and much the rest of the world into fascism.

Come to MHI’s panel at Left Forum on Sun. June 4 in NYC

[Note added Jul. 6, 2017: A video of the panel and some of the papers are published here.] Left Forum, the largest conference of left academics and activists in the U.S., will take place June […]

September 24, 2018 by MHI Resistance to Trumpism

Down with Le Pen, Trump, and Anti-Neoliberal “Left” Collaborationism

by Andrew Kliman   Jean-Luc Mélenchon, a supposed far-left anti-neoliberal politician, came in fourth in yesterday’s first-round voting for the French presidency. He then announced that he won’t call on supporters to defeat neo-fascist […]