Trump fired one of the few “grown-ups” in the White House, his Security Advisor Gen. H.R. McMaster, on March 22, and replaced him with super-hawk and right-wing conspiracy theorist John R. Bolton. Bolton will urge on Trump’s most irrational and warmongering tendencies in foreign policy.

Bolton has long advocated US nuclear bombing of both Korea and Iran. He is considered responsible for President George W. Bush starting the war in Iraq, now 15 years long. He coined Bush’s term “axis of evil” for Iraq, Korea and Iran, claiming that Iraq possessed “weapons of mass destruction” when it did not, as justification for the US invasion. He will encourage Trump to withdraw the US from the Iran nuclear accord, further destabilizing the Middle East.

A list of horrors that Trump had accomplished by last November is enumerated in MHI’s “Perspectives for 2018.” The list continues to grow. In the US, we see pictures daily of ICE agents grabbing immigrants off the streets, leaving their children screaming and crying on the sidewalk. Trump has fired people from, or caused the executive departments to fire and leave unfilled, so many important posts, that there are no longer experts around to advise him—most noticeably, no experts on Korea. Of course, this is intentional for departments and agencies that the Republicans’ right-wing billionaire supporters do not want to function, like Environmental Protection and Education (which is de-funding public education and funding “charter schools”). But everyone, in and out of government, is terrified of what he may do in his projected meeting with Kim Jong-un, especially with Bolton and perhaps no one else advising him now. 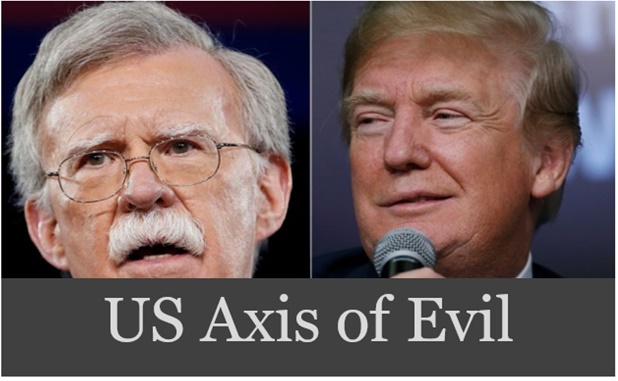 Yet the bourgeois culture’s attempts to normalize him continue, not only because people become numb under the barrage of horrors, but also because liberal democracy is unable to deal with such an existential assault on itself. We are urged to weaken his power by voting into Congress a Democratic majority in November, and to get him out in the next Presidential election in 2020. Meanwhile, the Democratic Party may tear itself apart with internal fighting. So while we cheer the Democratic victories in recent special elections in Trumpite districts, we cannot assume the Republicans will be turned out in eight months or three years from now.

Even if an “electoral remedy” removes Trump from power, it cannot undo all the damage he will have done by then—after just one year in power, the damage will take decades to repair, if it even can be undone. And it seems likely that even a Democratic Congress will fail to impeach and convict him, for fear of upsetting the system too greatly. Furthermore, there is no reason to think he will go quietly, having already expressed his disdain for normal democratic procedures. As the Mueller investigation closes in on him—daily now—we must fear what the cornered beast will do.

MHI supports and participates in the Resistance, including the latest mass protests by youth against gun violence. I wish to work on that, not to spend all my time defending civil rights and liberties, but we may well have to concentrate on defending them for our own survival and the survival of the Resistance—starting right now.

Will the soft-on-Trump-and-Putin “left” refuse to participate in the fight against authoritarian rule? I fear they will, since few have expressed any remorse over their stupid “anyone but Hillary” positions in 2016. It seems that the “burn it all down” people will be willing to sacrifice the whole Resistance and all of us to their belief that neo-liberalism is a greater evil than Trumpism.

Will that so-called “left” continue to attack MHI? We must be prepared for this too—by fighting them now. This task is far from being a task only for Americans. Similar white-nationalist and fascistic tendencies are appearing in the right and the “left” in the UK and throughout much of Europe and the world.

It’s clear that Marxist-Humanists solidarize with the Resistance, but we also need to take on and defeat this “left” in every way we can.

Lately, some U.S. media have voiced criticism of the term “alt right” and have shown a little interest in exposing the extent of “fake news” going around. On the first, I am happy to see […]