Warning: don’t have an accident, get sick or grow old

Saturday, March 4, saw the latest in a series of mass protest marches in London. While most of the recent protests were against Trump and Trumpism, Saturday’s march was an effort to defend the National Health Service (NHS). This is a public service, funded through taxation as well as National Insurance contributions from workers and employers, making health care free at the point of delivery and independent of the ability to pay.[1]

The ‘official’ police figure of attendance was 250,000! The march set off from Russell Square and worked its way via Trafalgar Square to Parliament Square for the post-march rally. Mostly white and Asian people of all ages attended, but only a few black people, as was the case with other recent marches. Many people on the march were NHS workers and carried signs like ‘Our NHS is here to stay–resist Tory cuts and closures’, ‘Defend Migrant Workers, Save Our NHS–don’t let the racists divide us’ and ‘Fund the NHS, not private profit’. A good number of trade unions were also present, including UNISON (nurses) and BMA (doctors).

Cuts have already created a crisis

The protest came after a long series of cuts in the NHS’ budget. It was notably under Tory Prime Minister David Cameron in 2015 that £20bn in 2015[2] were removed from the NHS budget, while George Osborne (Treasurer under Cameron) had taken a further £1.1bn from the service’s repairs fund[3]. Policy makers at Westminster sell these cuts to the public by arguing that the NHS is inefficient, sees a substantial amount of slack among staff, and notoriously over-spends. In contrast, the Red Cross has warned of a humanitarian crisis because the NHS is severely under-funded in light of rising demand[4]. 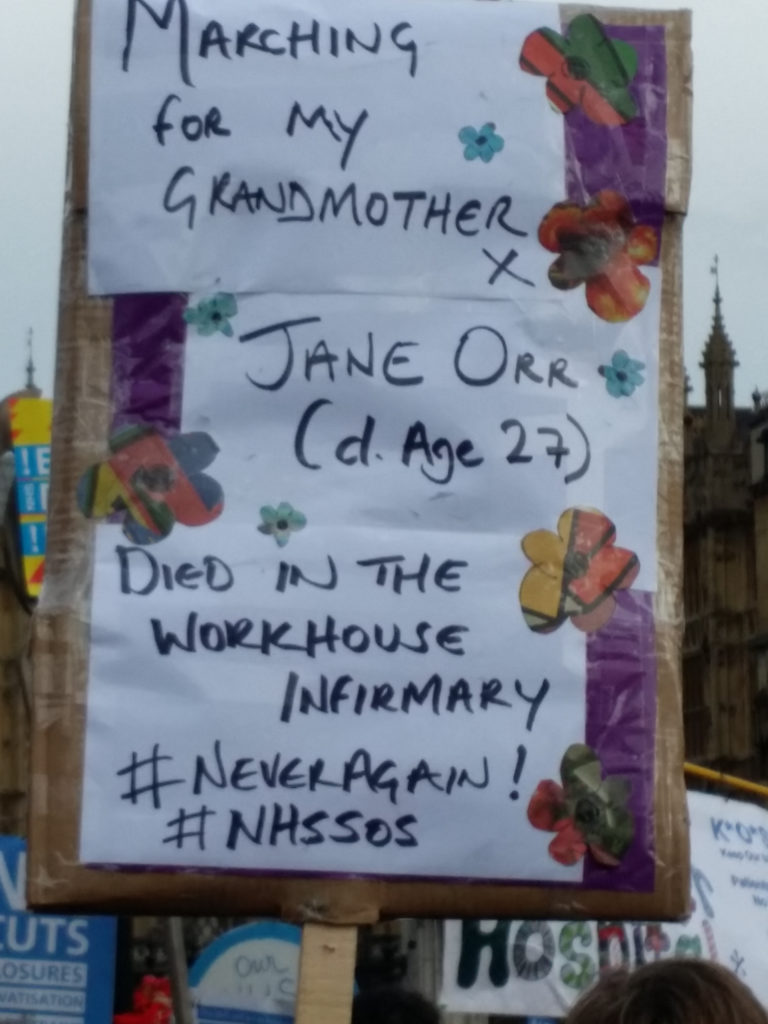 The Government’s sabre-rattling in this respect comes with more or less subtle hints that EU migrants are to blame for the increasing demands on the services. This kind of racism and scapegoating does not, however, hold up to scrutiny. One source[5] notes that 11% of NHS doctors come from EU countries, while one speaker at the pre-march rally pointed out that one way to keep the rising demand in check is to stop the wars that bring the refugees over.

The mood among the protesters was a mixture of fear, anger, defiance and determination. There were quite a few drummers and singing groups out. The Liverpool Socialist Singers had quite a sober outlook, for example with their song ‘Trashing hopes, trashing dreams–this is not the only way out’. But there was also a small band from Unite singing revolutionary songs, including ‘Bella Ciao’ and ‘We shall not be moved’. The mood was also reflected when speakers talked about Government plans for the NHS’ immediate future, which revolve around the so-called Sustainability and Transformation Plans (STPs). The Tories have demanded that these be drawn up by the NHS and local councils, for the purpose of reconciling the massive budget cuts with cost savings and imaginary efficiency improvements, in which the Tories believe like little kids do in Santa.

One speaker at the pre-march rally then quoted from an STP and commented that these are just business slang and jargon without substance, and called them bollocks. This speaker was also adamant to point out that the plans are not sustainable at all. Indeed, doctors warn that the Government’s 2017 budget plans for the NHS will ‘fail’[6]. It was noteworthy, therefore, that speakers kept referring to London borough Hammersmith & Fulham, which has recently rejected its STP[7]. This rejection came, among other reasons, because the Government has yet to produce evidence that the STPs deliver any of the heralded promises of improved service quality at a lower expense[8].

Instead, the already dire situation will become only worse, with more and more unit closures to follow. These already are accompanied by waiting times unprecedented in NHS history, as well as a declining service quality with reports that patients have died in hospital corridors while waiting for treatment. This is no surprise, given the cuts, which have led to pay restraints for staff and junior doctors now working 100 hours per week despite still-applicable EU laws[9]. From 1800s Manchester with love. It was not surprising, therefore, that the favourite chants were: ‘Who’s NHS? OUR NHS!’; ‘No ifs, no buts, no NHS cuts!’ and ‘Health care should be free, not just for the bourgeoisie!’. 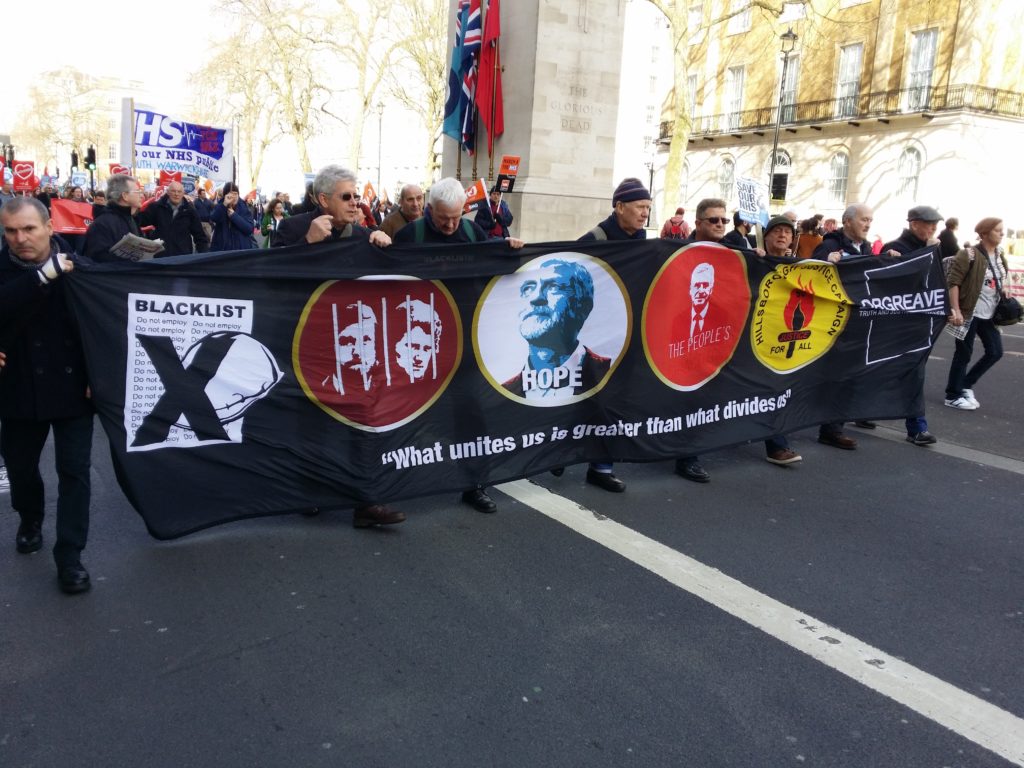 A speaker from The People’s Assembly Against Austerity said that the Government could easily not only afford to keep the NHS budget at its current level, but could also afford a substantial increase. This is self-evident when looking at the budget for NHS England of £116.4bn in 2015/16[10], in relation to the UK’s GDP of 2.283tn in 2016[11]. It turns out that this budget accounts for a mere 5.1% of GDP! If Scotland, Northern Ireland and Wales were included, then the budget would still only account for about 7.5%. The speaker also pointed out that the government ‘only’ needs to stop its wars, stop bailing out banks, and start collecting more substantial tax amounts from the corporations, especially because they have enjoyed tax reliefs since Tony Blair’s Labour Government; taxes paid recently were published in The Guardian newspaper[12]. This contrasts with the Government’s continued whining that not enough wealth exists in the UK that could be channelled into health care.

Effects of Brexit are felt

In terms of the wider picture, the Tories seem intent on including the NHS in future trade agreements, notably with the US. This is a move that follows from Brexit, as a consequence of which the UK aims to align its international trade with the US instead of the EU. There are now fears that US investors would be allowed and encouraged to strip out the NHS for private profit, which was a main theme at the protest. This was especially the case in Jeremy Corbyn’s speech. When he came on stage, he received the longest and loudest cheers of all the speakers.

Corbyn started off with what felt like a motivational speech during an election campaign, but did eventually move on to content. His key points were that EU nationals have every right to remain in the UK, not least because they are essential to the NHS and the nation’s economy. He also demanded of the Tories a substantial increase in the NHS’ budget because ‘quality funding and treatment are not a matter of which council [poor or rich] you live in’. This starkly contrasts with what the Tory government, and especially Health Secretary Jeremy Hunt, says: a further £10bn of ‘painful’ cuts per year until 2020/21 are needed elsewhere in the health care system[13].

Corbyn, in response, pledged to raise corporation tax to a ‘fair’ level if elected to Prime Minister. Finally, he said that a Labour government would block any trade deals with the US that involve the NHS. The speech was well received by his supporters, who hope that a left government will act in their interest–to keep a publicly-owned and administrated National Health Service alive, so that everyone can live without fear of accident, illness and ageing.

(Editor’s note, March 14, 2017:  An additional sentence at the end of the text resulted from an editor’s error, and has been deleted at the author’s request.)

Unite the Union – a general union

Greece: Austerity and Repression Worsen, Syriza Fails to Fight Back

by Joce Cognord The Greek government’s debt has surpassed 190% of GDP, and GDP has “grown” at a negative -6.5%. In 2012, simply in order to service the interest generated by its debt, the government […]