by Eric Andrian
The UK government is hurtling toward crisis over the inability of Parliament and the Prime Minister to come up with a majority-backed plan for exiting the European Union.

While the Parliament continued to debate interminably over the terms for how the UK should leave the European Union (EU), on 23 March an estimated one million people (according to organisers, People’s vote) marched through the streets of Central London under the banner, “Put it to the People!” They demanded that the British people be consulted about the Brexit process in order to help break the government’s deadlock. The opposition Labour Party as well as parts of Prime Minister Theresa May’s own majority Conservative Party have defeated her EU backed plan for implementing Brexit three times.

This march—possibly second in size only to a demonstration against the Iraq war in 2003, and the second large march in six months on this issue—comes amidst the huge petition to Parliament for the revocation of Article 50 (on withdrawing from the EU) that had already garnered an unprecedented six million signatures.

The March for a People’s Vote

MPs returning to Westminster for crucial votes on Brexit this week should hear the echo of a million voices demanding that any final deal is put to the people. Indeed, the scale and passion of this People’s Vote march shows there is a vast well of support in Britain for a positive pro-European case.

The build-up to the event claimed: “Campaigners against Theresa May’s “my deal or no deal” Brexit strategy are planning to mobilise the public and politicians for a showdown over the UK’s future in Europe in the final six days before Britain is due to leave the EU…”

There were lots of slogans around the theme of “Revoke” (article 50) and “Remain,” and homemade placards expressed that many people who marched felt angry and fed up by the political indecisiveness of Parliament or the drawn- out manoeuvrings of Prime Minister May.

One fact-checking website estimated that around 400,000 took part, not a million, as others reported. The march was attended, as expected, by an alliance of many across the political spectrum (matching the divisions in population at large), including “soft” Brexit Labour supporters and pro-Remain Conservatives. 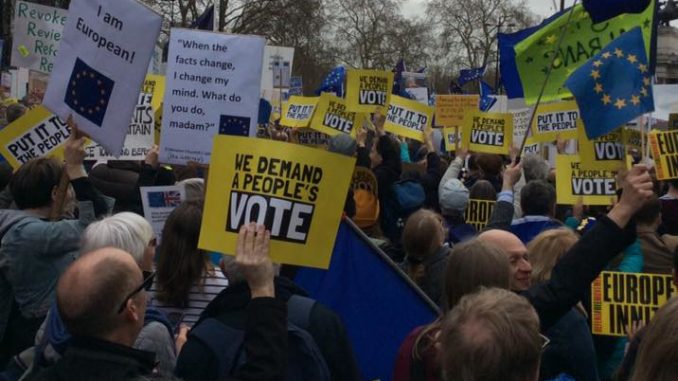 Source: Public Domain
Many observers and many who attended could be forgiven if they were under the impression that the demands of the march for a “People’s Vote” or “Second Referendum” was to cancel Brexit, and solely to support the “Remain” position of the whole debate.

The cross-party calls for Brexit supporters to join in the march exposed a radical-sounding populism that stresses the “reasoned” people versus an “indecisive” Prime Minister and Parliament. But this is actually an example of getting people behind the official opposition strategy of implementing the 2016 Referendum result to leave the EU, rather than the opposite. Indeed, the official Government response, rejecting the Petition demanding to stay in the EU, contains the gem:

British people cast their votes once again in the 2017 General Election where over 80% of those who voted, voted for parties, including the Opposition [my emphasis], who committed in their manifestos to upholding the result of the referendum.

Even within the Labour Party, many of the Remain supporters do not seem to realise that Leave is Labour’s official position. Not unexpectedly, much of the official Labour leadership and party machinery (including the campaigning group “Momentum” and the main trades unions) were either not officially represented or were noticeably absent on the day of the march, as Labour continues its electoral strategy of being all things to all people until it can snatch power from the Conservatives. 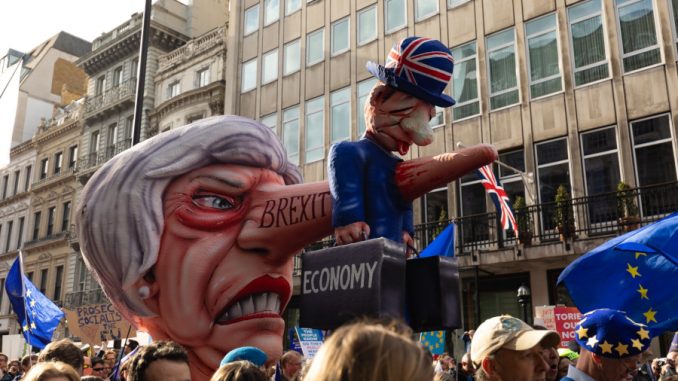 Source: Public Domain
How Did the UK Get Into Such a Mess?

With less than a week to go, PM May was in a quandary: how to get a hopelessly divided Conservative Party and Parliament to accept her Draft Withdrawal Agreement (“Plan B”) to leave the European Union (EU) on the revised deadline of 12 April?

Outside of the UK, people would have heard much about the “Brexit Crisis” and Britain’s “lack of readiness” with lurid headlines about, for example:

Brexit commentary here in the UK is noticeable for its frenzied speculation; every television, radio and social media news outlet has been pontificating daily on the almost mystical question, “Why can’t Britain just Leave already?”

If anything, many people have become quite weary of the information overload and inability of the politicians to resolve the deadlock.

Brexit is Not Quite a Done Deal

Within the last few months, PM May has faced repeated heavy defeats in Parliament of her Draft Revised Plan that she had spent two years negotiating with the European Union. The refusal of the House of Commons Speaker to allow a third rerun of the vote on a technicality and the catch-22 of the EU agreeing to an extension of the original 29 March deadline to the month of May if the Commons voted in favour of the Deal added to the air of deadlock in the political process; meanwhile plots abound to oust the PM as Leader from her own Party. A third Parliamentary vote on the Deal was recently defeated once again.

Touted as a done deal at the beginning of the year, May has spent the last two months with Plan in hand, trying to renegotiate aspects of it with an intransigent EU. She has shuttled around Europe twice in the process, met with the Leader of the Irish Republic (for which the main sticking point is the so called Northern Irish “backstop”) and held closeted discussions with leaders of UK opposition political parties and members of her own Party, trying to amass a promise for the requisite number of votes to allow the whole process to go ahead.

On 15 January, for example, May lost a vote concerning her modified Chequer’s Plan to leave the European Union—called the “Draft Withdrawal Agreement” (or “Plan B”)—by an unprecedented 432 votes to 202. She was defeated by a combination of rebel members of her own Conservative Party (especially the so called “Hard Brexiteers”, who want to Leave the EU as fast as possible without an agreement, i.e., the “No Deal” scenario), and mainly Remain (in the EU)/Soft Brexiteers supporting the Labour Party (LP) and other opposition parties. The following day, she narrowly survived a “vote of no confidence”, with the begrudging backing of a large section of her Party who were worried about losing power in an early General Election.

A big problem is that Parliament revealed in its voting (and also just recently in the late March series of indicative votes) that it disagrees with PM May’s Plan, but no one else has formulated any real alternative that could carry the majority. In this, the politicians are simply a reflection of the confusion and disagreements plaguing the country over how and whether Britain should “Leave” by other potential “Soft” or “Hard” options besides her Plan, or simply keep to the “Remain” status quo, and who should even decide: Parliament or another public Second Referendum vote (not to mention what should even be the ballot options!). Recent polls still highlight the sharp Leave/Remain split dividing the country, with barely any changes over time. 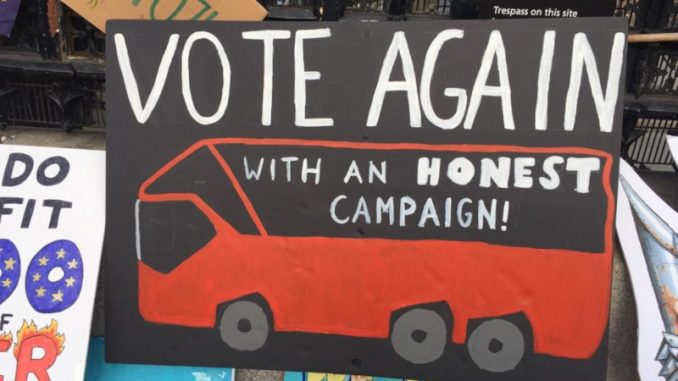 by Ralph Keller   This short article is not intended as an in-depth analysis of Brexit; it only presents an update on some the latest developments surrounding Brexit. Amidst a staggering rise of corona […]