The clear threat of massive protests defeated Donald Trump’s plan to visit the UK in February. He announced in mid-January that he was cancelling his trip on a feeble pretext that failed to fool anyone about the real reason: hundreds of thousands would meet him with protests in the streets. London Mayor Sadiq Khan, after a year of suffering Trump’s insults, tweeted in response to Trump’s cancellation, “It seems that President Trump got the message …”:

… from many Londoners who love and admire America and Americans but find his policies and actions the polar opposite of our city’s values of inclusion, diversity and tolerance. His visit next month would without doubt have been met by mass peaceful protests …. Let’s hope that Donald Trump also revisits the pursuit of his divisive agenda

One London comic joyfully responded with:

Theresa May come and get your boy he’s wet his nappy … Donald Trump is NOT coming!!!!! He’s cancelled his visit to Britain, the ultimate “No Platform” he’s scared of booing snowflakes!!!!

Within a few months of the US election of Trump to political heights, he has single-handedly managed to anger and alienate so many different groups of America’s multi-ethnic working class——being the very opposite of a “president for all”——and also angered people around the world, who perceive his volatile threatening North Korea with the world’s largest nuclear stockpile as a unprecedented threat to their own existence.

In the months following Trump’s election (and preceded by near constant demonstrations in the US), thousands protested outside the American embassy in London in solidarity with US women (against attacks on their health care and reproductive rights), US Muslims (increased surveillance and travel bans), and Mexican immigrants (anti-immigration, increased deportations, border surveillance and “the Wall”).

UK acts of solidarity with Americans culminated in the largest mobilisation of the Women’s Movements in both US and world history in January 2017. Over 100,000 “Nasty women” (and men) marched through the centre of London demanding justice for women and in solidarity with Trump’s victims.

There were the usual protesters on the Left——trades unions and the official Labour, LibDem, and Green political parties. But most noticeable was the large attendance by women who had never before been involved in political action, united by the feeling that a Trump presidency directly threatened their rights and the well-being of everyone in the world.

After every attempt to restrict rights of sections of the population in America, there have been parallel angry UK protests, meetings and activities in solidarity. So strong were the feelings that one year later, on the anniversary, another women’s march based on the American “Time’s Up” movement rolled through London again.

In February 2017, Parliament had debated a petition signed by an unprecedented 1.86 million people calling for Trump to be denied the customary state visit to the UK on the grounds that

Donald Trump’s well documented misogyny and vulgarity disqualifies him from being received by Her Majesty the Queen or the Prince of Wales. Therefore during the term of his presidency Donald Trump should not be invited to the United Kingdom for an official State Visit.

However, it was decided some sort of scaled back visit would take place at a later undetermined date.

Although Trump strangely claimed to have cancelled the proposed February visit because of the cost of the new embassy, inaccurately blaming former President Obama’s administration for a “bad deal,” many commentators believe it is the recent breakdowns in communication (actually, more Trumpish faux pas) with Prime Minister Theresa May, and fears of mass protests at his continuing pandering to racism, sexism and transphobia, that have stopped him coming for the moment.

After Sidiq Khan became the popular first Muslim Mayor of London in May 2016, Trump bizarrely congratulated him by telling The New York Times that Khan could be allowed to enter the United States, as “there will always be exceptions” to the ban on Muslims entering the US! Khan later coolly replied: “If Donald Trump becomes the president I’ll be stopped from going there by virtue of my faith, which means I can’t engage with American mayors and swap ideas,” and “I don’t want to be the exception to be allowed to go to America.” Trump seems to have taken this as personal affront to his well-meaning (!) gesture, and ever since has gone out of his way to tweet critically on Khan’s handling of London, most notably of the June 2017 terror attacks in London.

There is a such a strong feeling that Trump has gone too far with attacks on women, minorities and his transparent bullying of Mayor Khan that Londoners will most likely turn out to protest any state visit in large numbers. 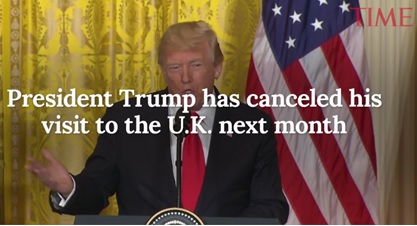 Recent surveys seem to suggest that the proportion of British people opposing his visit has risen from around a third earlier on in 2017, to half later on in the year.

A recent ICM Unlimited poll sample of 1972 adults for The Guardian (August 2017) reported that:

Trump’s retweeting of anti-Muslim videos made by the far-right group Britain First, back in November 2017, caused so much outrage in Britain that even Prime Minister Theresa May——in order to mitigate the perceived damage to Anglo-American relations——was forced to comment:

The fact that we work together does not mean that we’re afraid to say when we think the United States has got it wrong, and be very clear with them.

Trump’s recent comments that some African, Central American and Caribbean countries were “shitholes” and that he preferred immigration from Norway threw more oil on the fire and drew near universal condemnation across the world, despite his protest that: “No, no, I’m not a racist. I am the least racist person you have ever interviewed, that I can tell you.”

London’s high proportion of people from those backgrounds would of course disagree, likely turning out in huge numbers in protest if he came here.

Recent rumours that aides to Trump and May at this month’s Davos Forum were hammering out a timetable for a visit later in the year have caused a huge stir, as social media groups and politicians publicise their intent to produce “the biggest protest in UK history”(11).

Although Trump appears to be his own worst enemy, we should not forget that his administration is acting as a lightning rod for reactionary forces in US society. His agenda, which Liberals do not appreciate, is to see how far he can push the dismantling of bourgeois democratic norms in favour of more authoritarian forms of rule and the promotion of unreason (so called “post-Truth” politics). This is something even right-wing parties and regimes in the nominally liberal countries of Europe are keen to emulate, as the post-war consensus cracks under the continuing economic crisis and they retreat into isolationist nationalism.

For Marxist-Humanists, who are concerned with the path to a new type of society, what remains true today of Raya Dunayevskaya’s focus on “two worlds in every country” is that we should always support and encourage those forces from below that desire maximum freedom in human relations to develop the ideas, methods and forms of organisation they need to be able to oppose base reaction with human progress.

The message from London is clear: “Trump stay out!”