by F. Whitman and R. Keller

Calling for a benevolent government? “Come off it, the enemy is profit.”

The ‘Peoples Assembly Against Austerity’ organised a national demonstration, called ‘NHS in Crisis’, on February 3, in an attempt to save the UK’s crumbling health service. Some 60,000 marched in London alone, with thousands more marching in towns and cities around the UK, calling for more beds, more staff and better services. This was the most recent mass protest against austerity of the many held over the past few years; see, e.g., our previous coverage here and here.

This latest demonstration was a protest against the chronic underfunding of the National Health Service (NHS) and an attempt to alleviate the ‘winter health crisis’. Because this year’s winter was particularly severe by UK standards, the already existing shortage of resources and staff has been exacerbated. Campaign groups that attended also made connections beyond the demonstration’s theme to other services in crisis, such as education and care of the disabled. 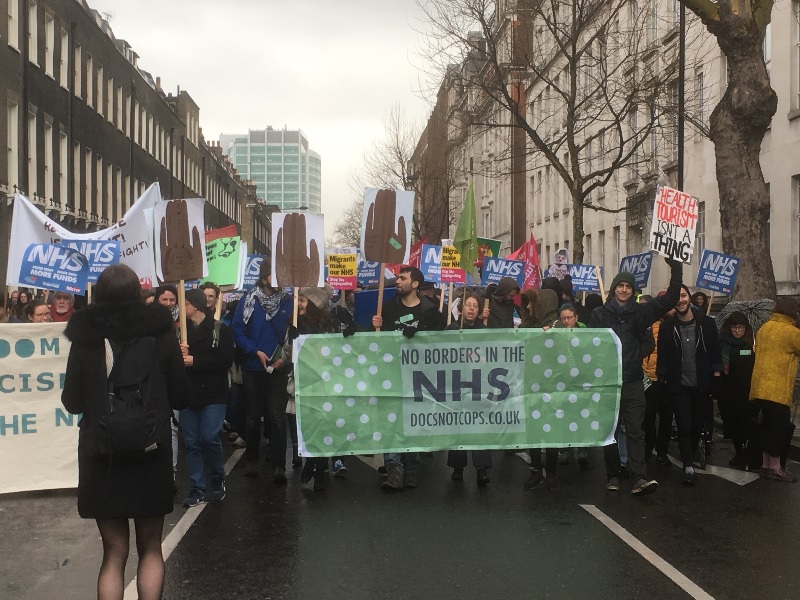 Despite the numbers, the demonstration largely escaped UK mainstream media attention. Only the left media covered it in some depth.

The personal political opinions of many of the demonstrators were expressed in their general expectation that a Labour government would stop the outsourcing, underfunding and attempts at privatisation within the NHS. Expressed differently, this means that the wider left, and the various campaign groups, look towards reformist social democracy to deal with the crisis, especially in terms of allocating more money to the health system.

For those not familiar with the history of British political economy, the NHS was set up post-WW2, in 1948, by the then-Labour government. The health service has since become associated with the best political ‘instincts’ and action of the labour and trade union movements—meaning that the needs of the masses should be dealt with from on high, by a well-meaning government. This was reflected in the pre- and post-demonstration rhetoric, and by some the slogans on the placards. “Docs Not Cops” was one; “Cut war not welfare” was another. One of the leaflets that were handed out said “Patients NOT Passports”. 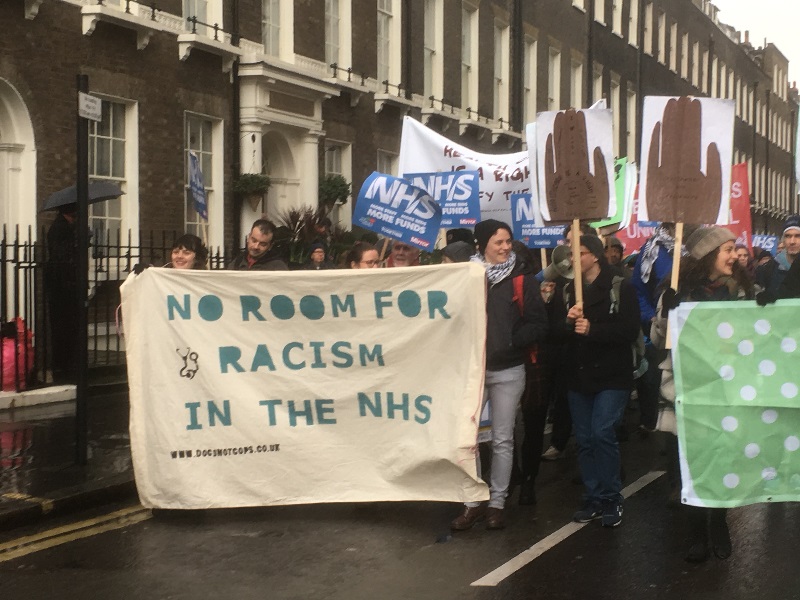 But government benevolence/malevolence is only a surface issue. Buried deeply within the fabric of society lies the capitalist mode of production for value with its profit maximisation motive—which includes keeping the profits rather than sharing them through paying taxes. NHS funding cuts are, therefore, one of the symptoms of this production mode, which clearly is irreconcilable with the interest of the masses and the ever-expanding need for healthcare.

The demonstration’s speakers almost unanimously accused individual members of the current government as having personally caused the crisis. In contrast, some demonstrators on the unaligned left came up with some rather insightful and creative chants, e.g.: “Unemployment and inflation are not caused by immigration. It’s bullshit, come off it, the enemy is profit!”; “Doctors, not Passports”.

We want to converse as much as we can with people who are willing to buck the trend, those who can see that the top-down approach will still leave workers subject to the caprice of the benevolence/malevolence of any government. The aspect of struggle that emerges from the ‘NHS in Crisis’ demonstration is that many people see beyond the politics of redistribution, and don’t agree that redistribution is the remedy for everything.

Episode 7: Implications of the UK Elections

Episode 7: Implications of the UK Elections

Why was the Labour Party trounced so decisively in the December 12 parliamentary elections? What lessons for the economic-populist left do the election results contain? The co-hosts explore these questions, and others, in this three-way dialogue with Ravi Bali, a London-based housing activist and Marxist-Humanist.

The Significance of Sadiq Khan’s Election as London’s Mayor

The P&O shipping company illegally dismissed 800 seafarers on March 17. Protests followed in many cities. The sacking follows a pattern of increasing maltreatment of workers in Britain today. […]