The worldwide protests against Trump and Trumpism continued in London on June 4, 2019, with a rally at Trafalgar Square, as well as on June 11 and June 18 at Birkbeck College with public meetings organised by its Student Union.

Trump arrived in London on June 3 for his state visit to the UK. One newspaper dedicated several pages to a series of pictures that documented what happened upon his arrival at the airport. Its coverage went into the minute detail that a guard lost his hat in the wind, but it only dedicated a small inset to Trump insulting Sadiq Khan, Labour Mayor of London.

The tens of thousands of protesters in London’s Trafalgar Square the following day were in a more sombre mood. 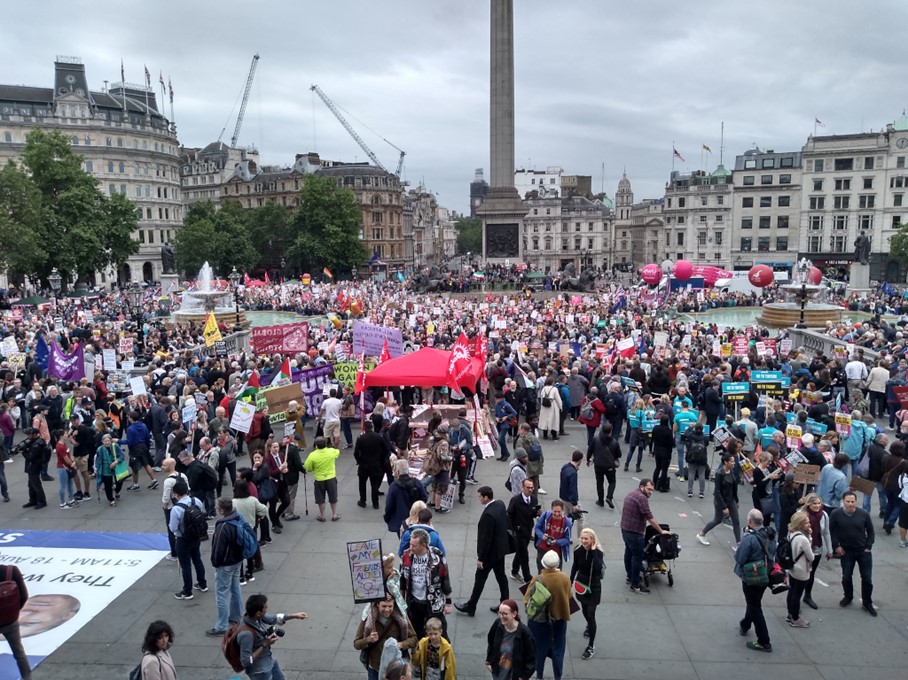 
Some organisers claimed that about 75,000 people rallied, but it felt more like 45,000 to 50,000. Trump, of course, had nothing better to do than dismiss the protest as “fake news” because his mind seems to work like this: he only saw people cheering along the routes he took through London, but did not see any protesters. This would mean to him that no protests happened; ergo reports of such protests must be fake.

OK, then, perhaps I can come up with my own ridiculous claim: I did not see Trump in person, which means he could not possibly have visited the UK. Ergo, reports that he did visit must be fake.

Despite Trump denying their existence, speakers at the rally in Trafalgar Square attacked him for his climate change denial, his misogynous conduct and his lying. One speaker voiced his fear over the danger of that no-deal Brexit would pose to the National Health Service (NHS). If the UK exits the European Union without a deal, then the stage will be set for large US investors to slice and dice health care, leading to the introduction of a charges-based system at the point of use. This fear echoes a recent news story from Germany, which finds the very same reason for why Trump and Farage favour a no-deal Brexit. Should this scenario play out, and should the NHS indeed be sliced and diced, then millions of ordinary people in the UK will face a US-style system: unaffordable payments and declining care.

Not everybody at the rally in Trafalgar Square was happy with the anti-Trump sentiment, however. One person held a sign expressing unhappiness because, in his or her opinion, protesters were too consumed with themselves instead of worrying about the bigger troubles of Syrian people dying in the prolonged civil war (see photo below). It is correct, of course, that the ongoing killing in Syria does not receive the coverage and the condemnation it deserves. Yet the criticism expressed by the sign seems to assume that the protests are “only a first-world problem”. This is not to belittle the concerns of Syrians and their struggle for freedom. Far from it, but Trump and Trumpism present an extraordinary danger to the world, which means the ongoing protests also deserve critical coverage. 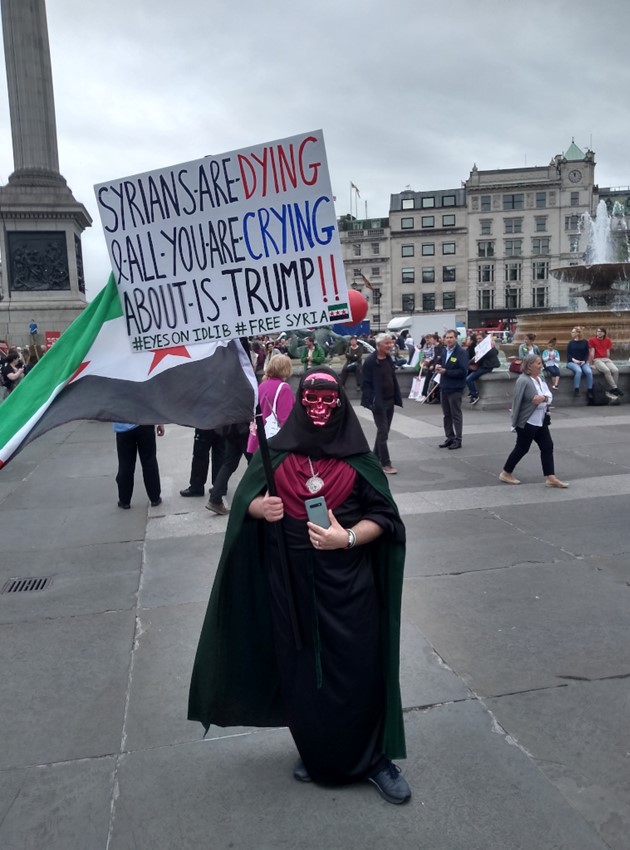 The anti-Trump movement continued with two public meetings on June 11 and June 18 at Birkbeck College in London, organised as a co-operation between MHI and the Student Union.

At the June 11 meeting, the audience listened keenly to five panel presentations around women’s rights and struggles. At first, there seemed to be a cosy consensus that the Left must put enough pressure on political parties to force concessions from the rich and powerful, and to make the demands of women a reality. The consensus ended when Eve Currie put the cat amongst the pigeons by saying that the involvement of political parties often has the effect of stifling the self-development of ideas. She spoke about the Irish abortion-rights victory as an example of how political parties were specifically told to stay out of declaring a platform stance on the issue.

The reaction from the other panelists was somewhat predictable, because they associate the word “organisation” with a party or trade-union hierarchy/bureaucracy. For MHI, however, organisation means self-organisation around an idea, without the burden of hierarchies and bureaucracies in which ordinary people become mere force and muscle assisting elected representatives or leaders. People must, instead, also become mind and reason if their struggle for self-liberation is to succeed. These views derive from Raya Dunayevskaya’s 1953 Letters on Hegel’s Absolutes, in which she rejects the notion of political parties leading people to liberation.

Currie’s talk was echoed by Jo Knott who spoke about women’s self-liberation more broadly, emphasising that “[n]obody else can liberate you, the only true liberation is self-liberation”. Knott also emphasised that different struggles “can still however support each other in … specific struggles for freedom.” Knott’s views were inspired both theoretically and practically by Raya Dunayevskaya’s writings, e.g. Rosa Luxemburg, Women’s Liberation and Marx’s Philosophy of Revolution, as well as US soccer player Megan Rapinoe who takes an active stance for LGBT rights.

The second Birkbeck meeting, on June 18, was specifically about how to fight Trump and Trumpism. Although the audience was small, the meeting was still worthwhile holding because a lively discussion ensued, revolving around how dangerous Trump and Trumpism are. Maggie Kelly, organiser of the “Keep Families Together” protest outside the US embassy in London, gave a very lively and shocking account of Trump’s crimes against humanity. Ravi Bali then gave examples of widespread voter suppression, how Trump stacked the judiciary in his favour, and how his Attorney General, William Barr, misrepresented the Mueller report. These are all attempts by which Trumpism may be consolidated in the US.

Bali also argued that, “without assistance to the resistance from outside the US, there is the real possibility that Trumpism will result in the erosion and then even suspension of democracy in America”. Moreover, “the defence of liberal democracy and the thwarting of arbitrary rule by an authoritarian is important, not just in its own terms but as the necessary condition for us to be able to … organize for a new society”. This is especially important because of the role the US plays in international affairs, which in turn “represents a clear threat to democracy itself, not just in the US but in the world more widely”. This is why people in the US are in dire need for support from people all over the globe.

Contrary to what Trump keeps tweeting, the resistance continues the world over. The resistance needs to be intensified because he might not go quietly—after his maximum of eight years in office, or if he is defeated in the 2020 presidential election.

Why I Voted for the Imperialist Hillary Clinton

by Eddie Goldman   It was just sitting there in its oversized envelope, this absentee ballot I get sent since I decided that my various health problems had made it too difficult for me […]

MHI analyzes the US Senate’s Kavanaugh hearing, Trump and the Republicans’ war against women, and the bleak future we can expect from the Supreme Court. Conclusion: Trump and Trumpism must be defeated and rooted out. […]