On the evening of 3 December, Marxist-Humanist Initiative (MHI) and friends joined other protesters in central London to oppose US President Donald Trump on his three day visit to attend a NATO (North Atlantic Treaty Organisation) security conference. The occasion was the 70th anniversary of NATO’s founding, and the demonstration was also against NATO’s militarism. 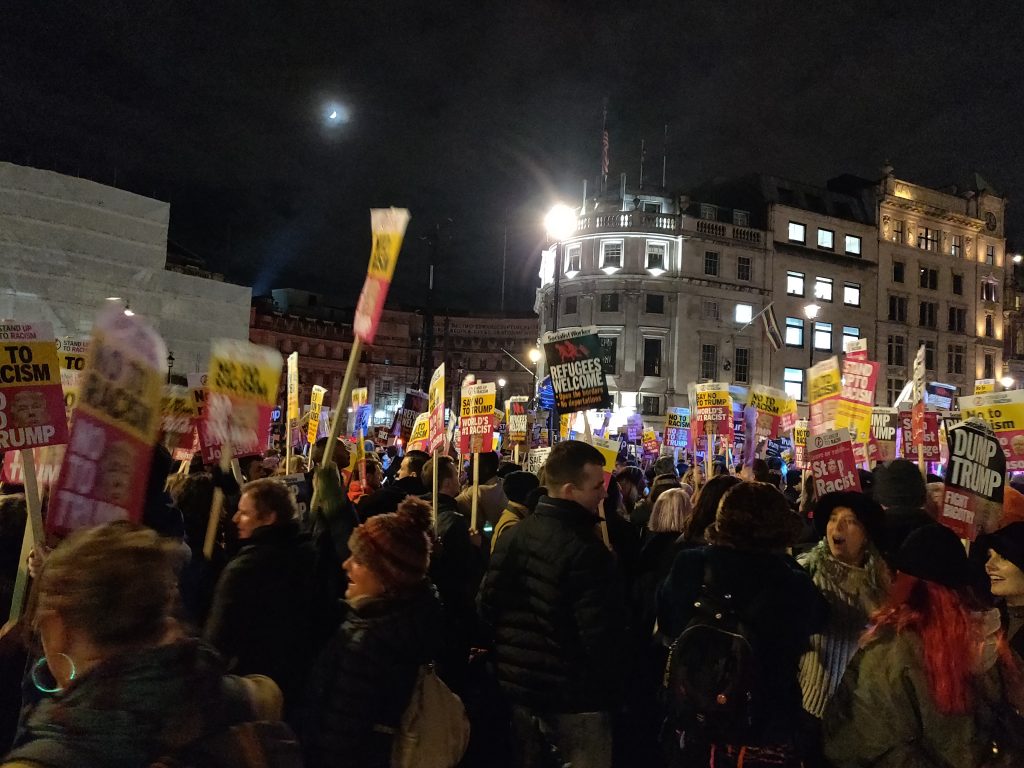 This was Trump’s third visit to the UK, and he had been met with huge noisy protests on each occasion, including recently in June this year.

The size of the protest this time were nowhere as large as previously, likely to do with the midweek timing of the visit in our UK winter and the looming nationwide General Election, which had been occupying people’s minds. This time, unusually, Trump appeared fairly restrained, apparently having been asked not to comment or openly show his support for Prime Minister Boris Johnson, for fear that Trump’s support would damage Johnson at the polls.

After the afternoon opening of the Conference and just as people were finishing work, a few thousand protesters, mostly in their 20s and 30s, descended on a cold, windy Trafalgar Square for a rally and speeches. They then marched to Buckingham Palace to attempt to interrupt Trump’s reception dinner with the Queen and the NATO leaders with loud noise-making.

After a noisy hour or so, they marched back to the Square and begun an advertised and good- natured rave, fully equipped with a sound stage and speakers, which lasted another good few hours whilst holding up traffic through the main thoroughfare; the surrounding area had been closed down by Police as a precaution. One participant from Australia who came thought the noise was a great and innovative way to express a political point.

MHI set up a stall to promote solidarity with the American Resistance against Trump, in contrast to a lazy anti-Americanism that has sometimes characterised the views of radicals in Europe, who assume that most Americans tolerate if not actually support Trump. 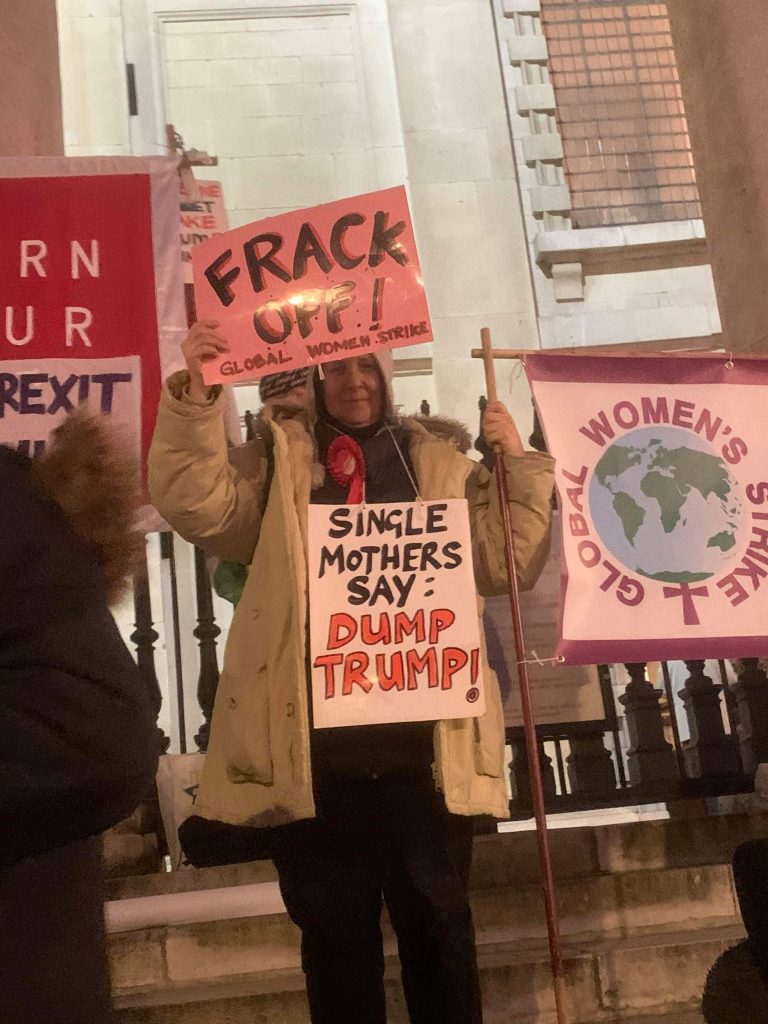 Photo by MHI
Along with other groups who were there, we faced threats from a few Trump supporters who wandered through the Square attempting to provoke and intimidate; one of them even overturned a stall, but was swiftly dealt with.

As well as Trump’s usual plethora of lies–he was rather embarrassingly corrected by French President Macron over his claims about European ISIS fighters–Trump showed his thin-skinned nature by leaving the Conference early. This happened after some of the NATO leaders were caught on open mike gossiping about him; perhaps it was a good thing he failed to notice this gesture by critic and outgoing EU Council Leader Donald Tusk. In his final speech to the UN General Assembly in New York back in September, Tusk took a sharp dig at Trump, saying “To protect the truth, it is not enough to accuse others of promoting fake news…it would be enough to stop lying.” With impeachment proceedings against Trump ongoing in the USA, it is unlikely he and his supporters in the Republican party will stop soon.

Protest Outside Parliament Against Trump’s State Visit to Britain

by Ralph Keller and Travis Blute The opposition to Trump internationally has not gone away even if it is slowing for now. In London, the latest protest since he took office a month ago was […]