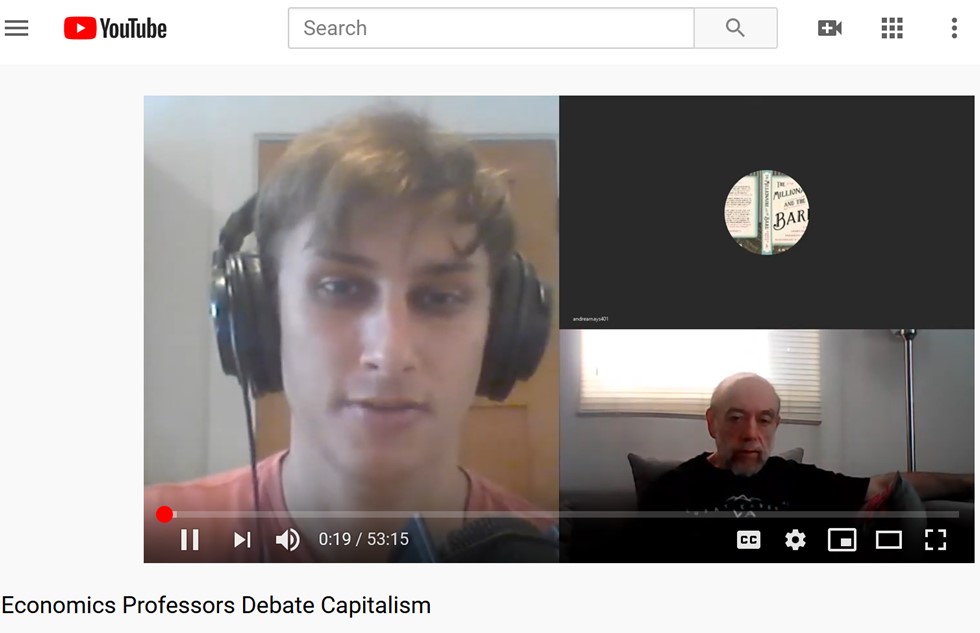 In the first podcast, Kliman and Andrea Mays debate libertarianism and socialism. Mays, a libertarian, teaches economics at California State University–Long Beach, and is the author of a book about Henry Folger’s quest for Shakespeare’s First Folio.

The podcast was recorded in December 2019. In his August 4, 2020 explanation of why its release was delayed, King wrote, “I was hoping we could have a second conversation before publishing the first, because our first was a bit rocky and we didn’t cover as much ground as I’d hoped to. Perhaps that conversation will happen, but I’ve decided to publish this one now regardless.”

Kliman noted that he has repeatedly and enthusiastically agreed to participate in the proposed “second conversation.” He also suggested that the COVID-19 pandemic is an apt time to focus on the threat of libertarianism: “The US is crawling with deplorables who insist on the ‘liberty’ to spread the virus through their maskless orifices, threatening the lives of the rest of us, especially people of color and city dwellers; and Trump and his lackeys have been goading them on. This is a near-perfect test case of libertarianism in practice.”

The first podcast concluded when, having arrived at her train station, Mays left the discussion. Kliman and King continued to talk for another hour and a quarter. This impromptu second podcast focused largely on alternatives to capitalism.

The debate with Mays was Kliman’s second public debate with a libertarian. In September, 2016, he debated well-known libertarian economist Per Bylund at an event in Stockholm.

The co-hosts interview Anne Jaclard, who worked with Dunayevskaya for 22 years. They discuss Dunayevskaya’s childhood years and early political activities; her work with Trotsky in Mexico; her development of state-capitalist theory, together with CLR James; and her subsequent development of Marxist-Humanism. Jaclard provides brief accounts of Dunayevskaya’s major writings, intertwined with personal recollections and vignettes.

Response to Sina Badiei’s “Refutation” of the TSSI

Andrew Kliman argues that Badiei’s attempt to consign Marx’s value theory to the dustbin of history, by “refuting” the TSSI, fails because it makes a most elementary error––the error of confusing and conflating value and price.   […]

Reclaiming Marx’s “Capital”: A Refutation of the Myth of Inconsistency by Andrew Kliman (Lexington Books, 2007) The Failure of Capitalist Production: Underlying Causes of the Great Recession by Andrew Kliman (Pluto Books, 2012) Both available […]