Yesterday, in the left-wing Greek online newspaper H eποχή (Epohi, The Age), veteran journalist Dimitris Givisis published an interview with Andrew Kliman on the latest economic crisis and the recent spike in inflation, the theory of capitalism’s economic collapse, and the effects of geopolitical conflict on globalization. Kliman is an economist and Marxist-Humanist theorist, a contributor to With Sober Senses, co-host of the Radio Free Humanity podcast series, and author of Reclaiming Marx’s “Capital” and The Failure of Capitalist Production. 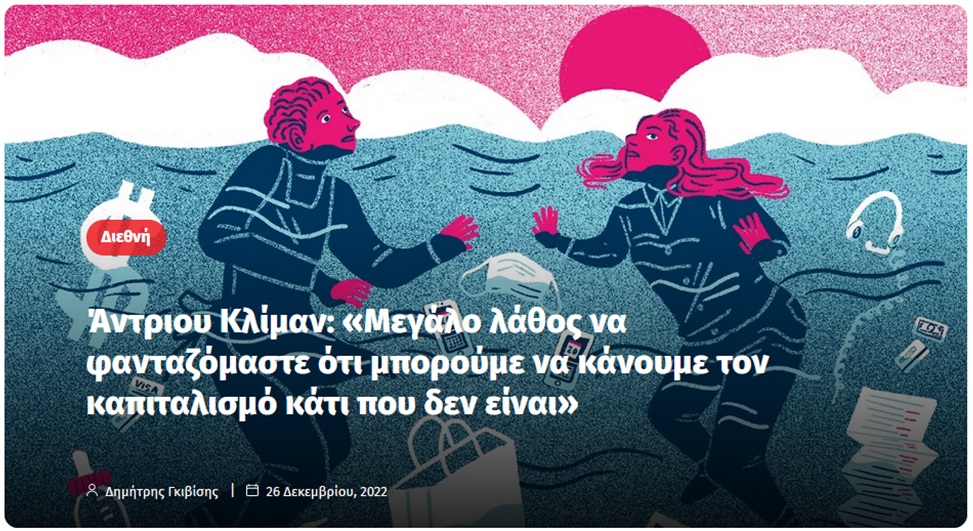 Image from the interview article

The following is an English translation of the interview:

Andrew Kliman: “It’s a big mistake to imagine that we can make capitalism something it’s not”

Permanent crises do not exist, says Andrew Kliman, author and professor of economics at Pace University in New York and one of the most important American Marxist economists, in this interview in H eποχή [The Age]. He also talks about the decline in investment and the causes of inflation and says that we need a different socio-economic system.

There are Marxists who argue that the capitalist system is collapsing. What is your opinion?

I haven’t seen sufficient evidence, or anything like it, to warrant the conclusion that capitalism is collapsing. Compared to the early post-World War II period, the system has been relatively stagnant and prone to crises ever since the global recessions of the mid-1970s and early 1980s. The problems have never been resolved. But this has not resulted in collapse, nor must it do so eventually. Paradoxically, the main way capitalism manages to survive is through recessions and financial crises! The recessions and crises lead to bankruptcies, unemployment, reduced wages and benefits, and so on. But these things boost profitability for the capitalists that survive. Since profit is the fuel on which capitalism runs, the result is renewed economic expansion––until the next crisis. Another thing that has kept capitalism from collapsing, especially in the US, is massive governmental and private borrowing. Although this makes the economic problems more severe in the long run, it does postpone the “day of reckoning.” As long as the US government can borrow cheaply, complete collapse can be delayed indefinitely. When some Marxists predict the inevitable collapse of capitalism, the main theory they invoke is Henryk Grossmann’s breakdown theory [this refers to The Law of Accumulation and the Collapse of the Capitalist System, the book that Grossmann, a Polish Marxist economist, published a few months before the stock market crash of 1929 ­­interviewer’s note]. Grossman claimed that his theory was based on Marx’s theory of value, but as I have shown in a recent article (https://www.marxisthumanistinitiative.org/economics/henryk-grossmanns-breakdown-model-on-the-real-cause -of-the-fictitious-breakdown-tendency.html), Marx’s theory actually implies that there is no breakdown tendency. Also, scenarios that lead to Grossmann-style breakdown are very implausible. None of this implies, of course, that capitalism benefits common people or even that it functions well in its own terms. It just means that, as Marx put it, permanent crises do not exist. Instead of complete collapse, there are crises that trigger responses that temporarily restore profitability, so the system limps from crisis to crisis.

Do you think that the current economic crisis is an ordinary crisis within capitalism, or that it has different characteristics, as it also meets with other crises, for example the energy, food and ecological crises?

This economic crisis seems to be caused mostly by the COVID pandemic and the responses to it. Since such a pandemic is, or was, a once-in-a-century phenomenon, today’s crisis is not uncommon. Another unique factor in this case is Putin’s war against the Ukrainian people. The war and sanctions against his regime have contributed to the length and severity of the crisis, raising energy and food costs and creating additional uncertainty, which depresses investment spending. However, underlying long-term economic weaknesses have also contributed to the duration and severity of the crisis. And the mechanisms of crisis are the usual ones, for example, reduced supply and increased demand leading to higher prices, and higher interest rates leading to lower spending.

How do you think globalization is affected by geopolitical conflicts?

Geopolitical conflicts dampen the trend towards globalization. The more geopolitical conflicts, the greater the risks and uncertainty associated with trade, investment, borrowing across national borders, and the creation of foreign subsidiaries by businesses.

Increased risks and uncertainty reduce the profit that can be expected from such activities and thus their volume decreases. In addition to dramatic changes that can limit the trend toward globalization, such as war, forced expropriation, and new tariffs, there are fluctuations in exchange rates, which are exacerbated by geopolitical conflicts. When a currency rises or falls in value, it can greatly affect the profitability of foreign borrowing and investment, the prices paid for imports and received for exports, and so on. Businesses, investors and lenders want, and to some extent need, stable conditions, including stable exchange rates. But exchange rate stability ended with the collapse of the “international gold standard” half a century ago. This seems to be a major reason that the number and severity of financial crises has increased. The relative decline in the supremacy of the US has also resulted in greater long-term instability.

What do you attribute the decrease in investment and productivity to? How is it connected to the chronic slowdown of capitalist accumulation?

Indeed, the slowdown in rate of capital accumulation, new investment as a percentage of existing capital, is a chronic problem.

The rate plummeted about four decades ago and has not recovered. So the current decline in productive investment is a drop-off from an already depressed level. But the causes of the current decline in investment are things happening now. So are the causes of the decline in measured productivity, since this decline is primarily a result of the decline in investment. Several causes are linked to the COVID pandemic: the shortages of supplies and workers caused by the pandemic; the inflation resulting from these shortages and from stimulative fiscal and monetary policies that prevented economies from crashing during the pandemic; central banks fighting inflation by raising interest rates; and the increased uncertainty and risk that results from all this. The recent decline in investment is also partly attributable to Putin’s invasion of Ukraine and the sanctions imposed in response. These factors have contributed to inflation by driving up energy and food prices, and they have created additional uncertainty and risks. It is plausible that the heightened levels of uncertainty and risk are long term, not temporary. Governments have been unable or unwilling to control the pandemic, and a significant, mostly right-wing, segment of society adamantly opposes public health measures. If businesses, investors and lenders come to the conclusion that severe pandemics are more likely than they had thought, and that they should therefore dampen their expectations of future profits, which is a logical conclusion, a long-term slowdown productive investment is likely.

What are the causes for the rise in inflation and what might be the Left’s response to counter this phenomenon?

The main causes of recent inflation seem to be, first, reduced supply resulting from the COVID pandemic. Second, increased demand resulting from government stimulus measures adopted to combat the effects of the pandemic. And third, higher energy and food prices as a result of Putin’s war against Ukraine. Apart from short-term emergency measures, economic policymakers have found only one way to fight inflation: they depress spending, mostly by raising interest rates. Interest-rate increases lead to a reduction in productive investment and home construction and they dampen the growth of consumer spending. But the reduced spending does more than counteract the tendency for prices to rise, of course. It also leads to a decrease in production and employment, which makes it harder for workers to get wage-and-benefit increases and better working conditions. So the cure for inflation may be worse than the disease. It is remarkable: the socioeconomic system of all these policy makers and economic advisers, as well as their personal careers and reputations, are at stake. However, their only “solution” for inflation is to pull the plug on the economy! Given this fact, I think it’s delusional to imagine that the Left can find a better solution to inflation. And in general, I think it’s a big mistake to imagine that we can make capitalism into something it’s not, a system that serves the needs and interests of regular people. Instead of trying to solve capitalism’s problems for it, we should stand with these people. We should assist their struggles to protect their jobs and incomes, which are threatened by both inflation and anti-inflationary policy. And we should make clear that, if we want a genuine solution that benefits ordinary people, we need a different socioeconomic system.

Dunayevskaya’s reputation does not match the reputations of some other great revolutionary Marxist thinkers, but Travis Blute argues that it deserves to do so. […]

Marxist-Humanist Initiative convened a conference on “The Economic Crisis & Left Responses” on November 6, 2010 at Pace University in lower Manhattan. The conference was conceived as a way of promoting critical dialogue on both […]