The most recent attempt to consign Marx’s value theory to the dustbin of history, by “refuting” the temporal single-system interpretation (TSSI) of the theory, is a complete failure. It fails because it makes the most elementary error one can make when discussing Marx’s value theory––the error of confusing and conflating value and price.

Badiei’s Confusion and Conflation of Value and Price

In a recently posted video-conference presentation, Sina Badiei, a philosopher at the Collège International de Philosophie in Paris, put forward what he grandly called a “Refutation of Kliman’s Temporal Single-System Interpretation.” (This part of his presentation starts at about 1:00:05 into the video.) Yet the purported refutation actually refutes nothing. The most charitable way I can describe it is to call it an example that exhibits a counter-intuitive implication of the TSSI. Personally, however, I don’t find the example to be even counter-intuitive, much less to “manifest [the TSSI’s] problematic character.”

Badiei’s example is a modification of the example I provided in Table 6.1 on page 95 of my 2007 book, Reclaiming Marx’s “Capital”: A Refutation of the Myth of Inconsistency, in which an apple is used as an input into the production of applesauce. In his version, some gold is used to produce a watch. The value of the gold is 10,000 euros when it becomes an input into the watch, but only 500 euros when the watch is completed and offered for sale. 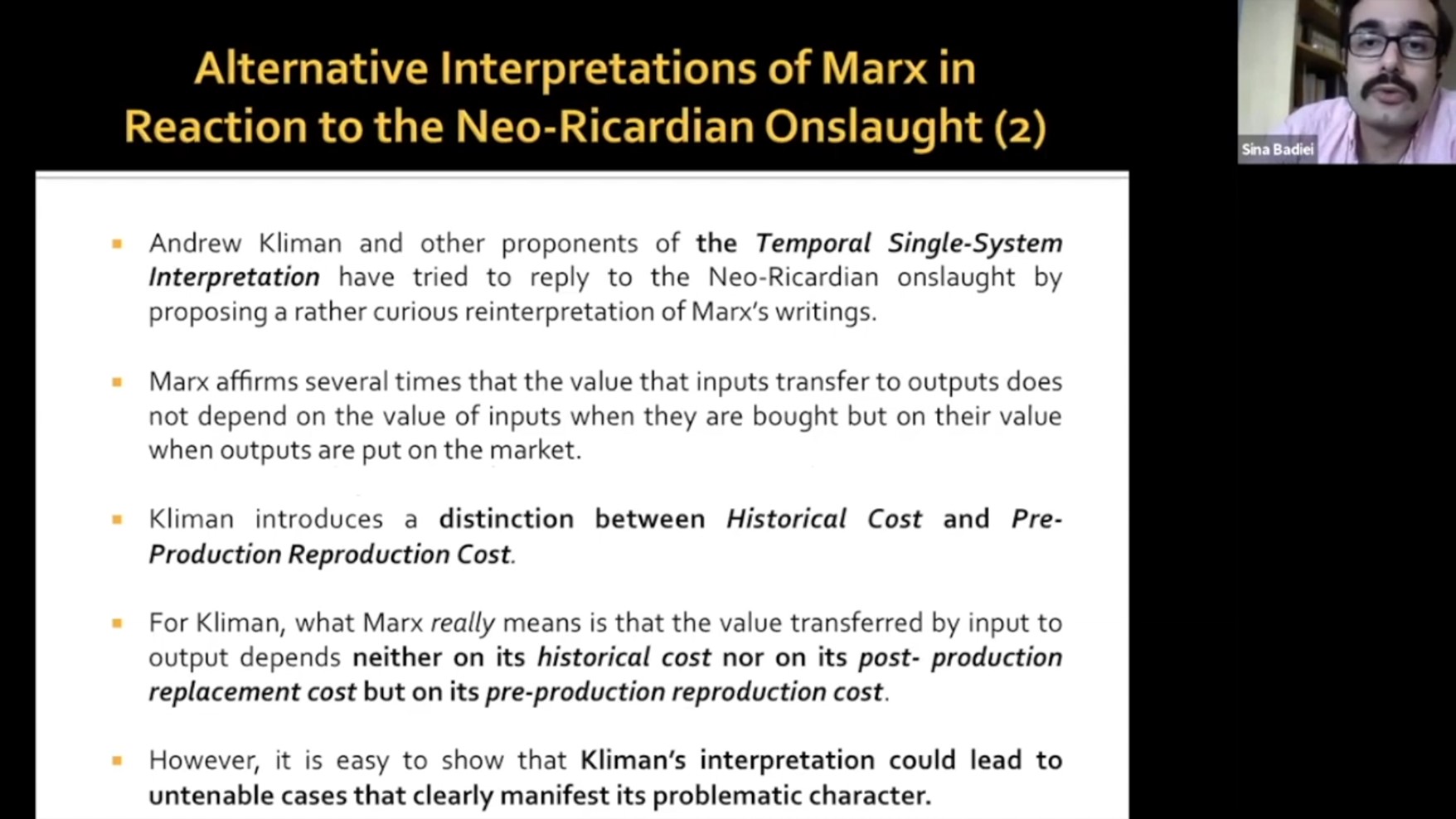 But Badiei doesn’t think the watch can be sold for 10,200 euros. Neither do I. And I strongly doubt that Marx would have thought so.

Below, I’ll discuss why the watch cannot be sold for 10,200 euros. But my point here is that, in order to “refute” the TSSI, or at least to show its “problematic character,” Badiei has to ascribe to me a view that’s contrary to my actual view: “Based on Kliman’s reasoning, the golden watch should be sold for 10200 because [… the gold’s] pre-production reproduction cost was 10000 euros.” The word “should” is a bit ambiguous, but since because moral questions are not relevant in this context, Badiei almost certainly meant that I predict, or the TSSI predicts, that the watch can be sold for 10,200 euros.

I make no such prediction, however, and neither does the TSSI.

Badiei goes wrong because he confuses and conflates price and value here. Or, at the very least, he wrongly attributes to me the view that, in Marx’s theory, the value of the watch is the only determinant of its price. Yet I’ve repudiated that view explicitly, again and again, as did Marx. So my actual view––i.e., my actual interpretation of what Marx’s value theory says––is that the value of the watch, at the moment it is completed, is 10,200 euros but, because a commodity’s value is only one of many determinants of its price, the price for which the watch can be sold may be different, even extremely different.

Thus, Badiei’s example fails to “refute” the TSSI, and it fails to show that the TSSI has a “problematic character.” It even fails to have any implications that are counter-intuitive, at least to those of us whose intuitions aren’t influenced by talk that conflates value and price.

Indeed, owing to its conflation of value and price, Badiei’s example is irrelevant to the issue he wishes to address: the contrasting implications of the TSSI and physicalist-simultaneist interpretations of Marx’s value theory. The purpose of his example is to show that the physicalist-simultaneist interpretations are better than the TSSI. Yet despite their other significant differences, both interpretations are about the value––not the price––of the watch.[1] Thus, by discussing changes in the watch’s price when he should instead be discussing changes in its value, Badiei simply fails to get the differences between these interpretations.

The TSSI does not and cannot predict anything at all about the watch’s price, because it is an interpretation of Marx’s value theory. It has nothing to do with how prices of particular commodities are determined.

But I, personally, predict that the price of the watch will plummet sharply––from “somewhere around” 10,200 euros to “somewhere around” 700 euros. I predict that the fall in price will occur well before new watches, produced using gold that the watch manufacturers purchase for 500 euros rather than 10,000 euros, are completed. (This prediction doesn’t contradict the TSSI in the least because, to repeat, what the TSSI says about this case pertains to the value––not the price––of the watch.)

Here’s why. First, almost no one needs a gold watch immediately. During the short period (15 days in Badiei’s example) between the fall in the price of gold and the completion of watches produced by means of cheaper gold, people can make do with their existing watches, or take a look at their phones, or ask strangers what time it is, and so on. Second, gold watches are often bought as investments, if people expect to be able to resell them for a higher price, or at least a price similar to the one they paid––but not if they expect the price to plummet. So, third, once people realize that the price of gold will fall in the near future, and that this will cause the price of gold watches to fall as well, demand for watches that are being offered for “somewhere around” 10,200 euros will collapse. Prospective buyers will simply wait for the new, lower-priced watches.

Fourth, to sell already-existing gold watches that they have in stock, sellers will thus have to mark them down drastically and take a huge loss. And fifth, they have every incentive to reduce their asking prices as soon as possible, and no incentive at all to wait until either the price of gold falls or watches produced with cheaper gold are completed. So, finally, the price of gold watches will start to plummet from the moment when the public expects their prices to fall––days, weeks, or even months before any gold valued at 500 euros rather than 10,000 euros is produced.

Badiei’s interpretive methods leave a lot to be desired––a whole lot. The problems aren’t limited to the fact that he grandly pronounces that he has refuted the TSSI on the basis of an example that turns out to be irrelevant because it wrongly conflates price and value. The bigger problems stem from the fact that Badiei cherry picks the evidence he chooses to present instead of considering the evidence as a whole.

For example, he fails to discuss the large body of direct textual evidence in which Marx states explicitly that the amount of value transferred from inputs to output depends on the inputs’ cost when they enter production (as the TSSI says). He fails to discuss whether any statements by Marx contradict this interpretation. He fails to consider whether the physicalist-simultaneist interpretations that he prefers lead to “internal” inconsistencies in Marx’s work. He fails to consider whether these “internal” inconsistencies are the products of bad interpretation, not features of Marx’s texts themselves, because they disappear when we understand Marx’s value theory as a temporal and single-system theory. And so on.

Badiei’s methods run afoul of widely accepted norms of scientific inquiry and interpretation. What he has given us is not responsible interpretation, but a hatchet job. The fact that the hatchet job is based on an irrelevant example, which in turn is based on his conflation of price and value, only makes the problem worse.

[2] This is what Badiei (incorrectly) regards as the implication of physicalist-simultaneist interpretations of Marx’s theory.

All Value-Form, No Value-Substance: Comments on Moseley’s New Book, Part 12

by Andrew Kliman Here is the twelfth installment of “All Value-Form, No Value-Substance,” the series of comments I’m writing on Fred Moseley’s new book, Money and Totality: A Macro-Monetary Interpretation of Marx’s Logic in Capital […]

All Value-Form, No Value-Substance: Comments on Moseley’s New Book, Part 4

by Andrew Kliman Here is the fourth installment of “All Value-Form, No Value-Substance,” the series of comments I’m writing on Fred Moseley’s new book, Money and Totality: A Macro-Monetary Interpretation of Marx’s Logic in Capital […]

Video: Kliman’s Yale Colloquium on “Use-Value and Exchange-Value … and Value”

Oct. 7 Yale Univ. colloquium, featuring talk by Marxist-Humanist economist Andrew Kliman on “Use-Value and Exchange-Value … and Value.” The article includes: video of the colloquium; the quotations to which Kliman referred; and his full text. […]