On 29 March, thousands of women took to the streets in cities across the island of Ireland. The protests were in response to the acquittal of two men, both of whom have played for the Ireland international rugby team, who were tried for raping a young woman (she was 19 at the time of the incident). The protests’ main slogans–#IBelieveHer and #WeStandWithHer–expressed solidarity with the woman and drew attention to the injustice perpetrated by the criminal justice system.

Even though the trial was in Northern Ireland, which is part of the legal jurisdiction of the United Kingdom (UK), protests were held all over the island of Ireland, i.e. in two different jurisdictions. The cross-border nature of the protests is, in part, a reflection of the fact that the Irish rugby team organises on an all-Ireland basis. This fact, in and of itself, is insufficient to explain the protests. A more important factor is the cross-border links between women’s groups on the island of Ireland.

These links have been maintained and deepened through recent campaigns on the abortion issue. The cross-border nature of these campaigns has been enabled by the fact that the position of women in Northern Ireland regarding abortion is more like that in the Republic of Ireland than it is to the rest of the UK. 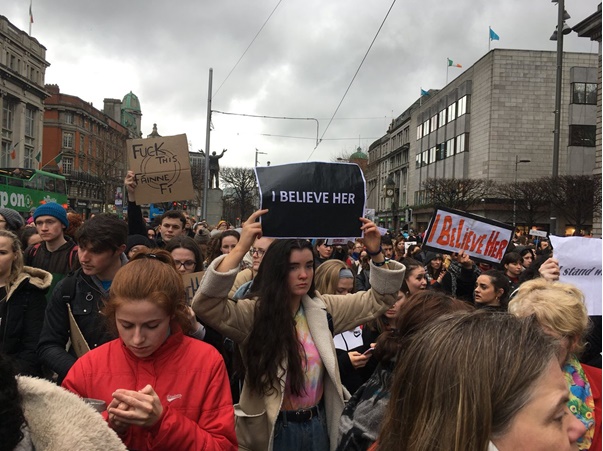 In Belfast, the protests were organised by the campaign group Reclaim the Night, working in coalition with a number of different organisations that work around issues of women’s rights (Alliance for Choice Belfast, Belfast Feminist Network, Reclaim the Agenda, Women’s Aid, and the sexual abuse counselling service Nexus). The coalition nature of mobilising was replicated across the other cities in which protests were held; Dublin, Derry, Limerick, Cork, and Galway.

These coalitions exist because of ways in which women are particularly disadvantaged in society, e.g. sexual harassment in public spaces; restrictions on access to abortion; domestic violence; childcare; elderly care; domestic labour. The oppression of women–the systematic disadvantaging of women and the denial of equality–is woven into the fabric of capitalist society. Capitalism relies on unpaid labour in the domestic sphere for the day-to-day clothing and feeding of the workforce. The generational reproduction of the workforce, birth and childrearing, is also unpaid work that is essential to the effective functioning of capitalism. Women’s struggle against oppression, therefore, poses the question of how society should be organised.

The struggle against women’s oppression opens up the possibilities for a deeper discussion, one that goes beyond the particular issue, in this case the difficulty of obtaining a rape conviction in the courts. The connections between different, particular, issues were made by some women on the protests. One homemade placard declared: “Fáilte go hEireann [Welcome to Ireland] Where ‘TOP SHAGGERS’ are NOT GUILTY and a woman can go to jail for 14 years for using an abortion pill”. This protestor was making a connection between the acquittal of the men and the denial of abortion rights. In doing so she was pointing to a deeper, underlying, problem.

There is a tendency, on the organised left, to view the struggle against capitalism as necessarily centred on the workplace. Many point to the low level of trade union membership, and historically low levels of days lost to industrial disputes, as an indication that the working-class is quiescent. There is some truth in this view. But, it is too reductive. In struggling against their oppression, women are struggling against the limits of capitalist society. The struggle for women’s liberation, as Raya Dunayevskaya recognised, is inextricably linked to the struggle against capitalism. Drawing attention to the connections between women’s liberation and human emancipation is an important practical and intellectual task today. In Ireland, women are leading the way in making these connections.

“Strikes, Protests, Organizations: Iranian Revolt Deepens Despite Executions,” by Theresa Henry. On the ongoing mass protests against the regime—women & youth in the streets, strikes in the oil fields—met by shootings, beatings, jailing and executions. […]