The result of the May 25 Irish referendum in favour of decriminalising abortion was a proud and unprecedented victory for the cause of women’s liberation and for the forces of freedom across the world. The turnout for this referendum was the third highest ever in Ireland and voter registration was up 125,000 ahead of the vote. Just over 64% of the 3.3 million electorate voted, with 1.43 million in favour of repealing the 8th amendment to the Irish constitution and 0.72 million against. And this two-thirds majority in favour of legalising abortion was notable for more than just being a landslide. The urban/rural divide, traditionally demarcating liberal and conservative voting patterns, was toppled, as 39 of the 40 constituencies in Ireland returned a Yes vote, in favour of repeal. Only Donegal returned a No, but this No was as narrow as it gets, with only a 51.8% majority against repeal.

Old assumptions about a split in the vote between the young and old also proved flawed. While younger voters voted overwhelmingly in favour of repeal, so did 63% of 50-64 year olds. Even those over 65 years surprised analysts by producing a significant 40% minority vote in favour of repeal. So there has been no uprising of young against old or metropolitan against ‘culchie’. Instead, the uprising was by the entire country, against the old social conservative mores of patriarchal Catholic society.

These results don’t only reflect events in Ireland. The resounding vote in favour of legalising abortion speaks more broadly of grassroots movements fighting for women’s liberation across the globe.

As reported in an MHI article late last year, international solidarity is a significant aspect of a growing wave of activism on the issue of abortion rights. Networking and collaboration between women’s groups, and the forces of freedom in different countries—from the Netherlands to Northern Syria—has been a prominent feature of Ireland’s pro-choice campaign. Only last September, there were demonstrations of solidarity in more than 20 cities across more than 7 different countries on the day of the annual March for Choice rally in Dublin. And this evidence of international networking tells us that activists are recognising common purpose with each other, against the forces of social conservativism in their own countries.

Additionally, these networks, and the two-way flow of ideas which they provide, are proving to be the basis for the development of ideas about what freedom means.  Ultimately, the thousands of Irish citizens who travelled back to Ireland from all over the globe, specifically to repeal the 8th amendment, tells us just how far reaching debate and discussion of abortion is. While it is hard at this stage to get a figure on exactly how many people travelled to vote, it is indisputable that those chronicling their journeys home, from as far afield as Asia and Latin America, created a twitter storm.

Women had to Fight Right-Wing Influence from Abroad

The emancipatory referendum result wasn’t easily won. Rather, it came in spite of enormous international interest and interference on the part of the forces of oppression. Considering the huge financial resources given to the anti-abortion campaign from US social conservatives over many years, the fact that abortion has been decriminalised is astounding. Considering how Italy’s far right ProVita have been using Ireland as a battle ground for their own anti-abortion campaigning, it is inspiring to see how grassroots activism succeeded in Ireland. Considering that the British far right also attempted to influence the Irish referendum, it is invigorating to see Irish voters so resoundingly demonstrate their independence. And considering that anti-abortion groups in Ireland tried to replicate the Trump and Brexit votes by hiring consultancy firms (uCampaign and Kanto) that worked for the Trump and Leave campaigns, it is truly moving to realise that ordinary people, who exposed the oppressive reality of living in a society that criminalises abortion, galvanised the people of Ireland into standing up for women, and did so using human-centred reasoning.

As one person wrote on the Irish Times liveblog, as the referendum results were being announced, “How wonderful that so many older women (and men) who grew up with the Church and were taught for years that abortion under any circumstances was wrong, voted YES because their basic humanity shone out.” 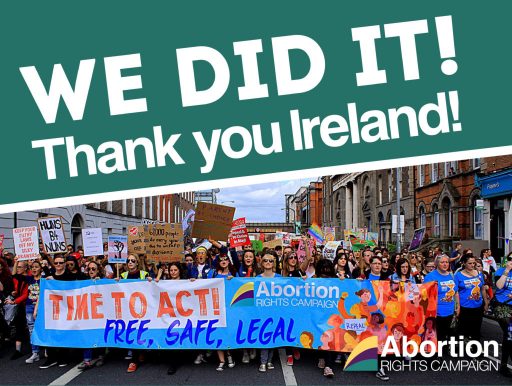 Leo Varadkar, Ireland’s Taoiseach (Prime Minister), hailed the referendum result as “a quiet revolution”, but this description doesn’t sit well with many who recognise the revolutionary aspect, but resoundingly reject the adjective ‘quiet’. This was not a referendum won by politicians, so perhaps Varadkar could be forgiven for missing the incredible energy and passion at work over preceding years. In fact, it would be more accurate to say that the referendum result was won despite politicians, who were slow to respond to the building political pressure. Politicians even trailed activists, with two remarkable last-minute about-turns by prominent pro-life TD’s (Irish Members of Parliament) Simon Coveney and Hildegarde Naughton, after they engaged with the pro-choice campaign.

Activists Fought for Themselves

As noted in my article earlier this year, as soon as politicians bowed to overwhelming pressure and agreed to hold a referendum, campaigners were calling on them to take a back seat and let those affected by the issue take the lead. By telling politicians “you don’t represent us”, activists were insisting that only they could represent themselves.

The Strike 4 Repeal Assembly is a further example of how activists continually set the agenda on this referendum and politicians followed. In this instance, activists refused to leave the important wording of the proposed referendum up to politicians. Sensing politician’s cautiousness/coyness over proposing post-repeal legislation, activists grasped the moment and demanded ‘straight repeal’ on the referendum ballot, and unrestricted abortion rights legislation. Following successful repeal of the 8th amendment, Ireland now has draft abortion legislation for unrestricted terminations up to 12 weeks, and beyond that, restricted abortion allowed under certain circumstances. While this is not yet the unqualified ‘free, safe, legal’ access to abortion that campaigners continue to push for, it places Ireland ahead of Britain, where abortion is only available up to 24 weeks by the consent of two doctors.

All in all, it is clear that the outcome of the referendum is the result of reasoned, compassionate and human-centred campaigning by a dynamic and exhilarating network of grassroots activists. As a result, abortion rights movements elsewhere in the world have been bolstered. Ireland is no longer an outlier for forces of oppression across the globe, and instead now represents a beacon of hope to other nations who face the same battles that the people of Ireland did. Most notably, in the first instance, the referendum result in the Republic of Ireland lends enormous weight to the pro-choice campaign in Northern Ireland, which is subsequently now at the forefront of British politics.

But the movement’s impact goes much further, as Grainne Griffin (founding and Board member of Abortion Rights Campaign and Co-Director of Together for Yes) acknowledged at a press conference shortly after the referendum result was announced. Solidarising with Poland, Argentina, El Salvador, Brazil, the Philippines and Chile, she articulated the common cause people of these countries had with the people of Ireland. Citing also the climate created in the wake of Trump and Brexit, she held up the achievement of Ireland’s abortion rights movement as a rallying cry of hope to freedom movements across the world.

Una Mullaly wrote in the Irish Times, “What happened in the referendum vote was seismic, but more seismic still was the realisation that this vote was reflecting change, not just instigating it.” Her keen observation directly signals the fact that the masses are on the move, both in thought and in grassroots action.

A new wave of abortion rights activism began over 5 years ago in the wake of the tragic death of Savita Halappavanar. Savita’s story galvanised campaigners to ensure her death was not in vain, by fighting to prevent further deaths and to change the experience of life for women in Ireland. Across the life of the Repeal campaign, however, the issue of abortion has cultivated many different ideas about equality, autonomy and solidarity.

What started as a call for compassion for another person’s experience, elicited through the sharing of personal stories, developed into the recognition of the universal experience of what it is to be a woman. The issue of abortion broadened into one that concerned, not just the individual in crisis pregnancy, but also women with fatal foetal abnormalities and those experiencing poverty. It also became not just about women but about people, irrespective of gender identity. And it was understood to be an issue, not just for people in Ireland, but for people across the globe, wherever access to abortion is criminalised. As people took to the streets with information stalls at the weekend, or round housing estates knocking on doors, as they found themselves in the Citizen’s Assembly, interviewed on the street, or simply talking with a neighbour, the issue of Ireland’s anti-abortion stance advanced into an issue about equality, human autonomy and what it is to be free, and it was people’s stories that proved most powerful, not external moral authority.

What happened in the pro-choice campaign in Ireland was a genuine grassroots movement from below. It started as a quiet conversation between a few determined women. It grew into a larger discussion in Irish society. It became a debate that engaged people from all corners of the globe. And, it ended as a glorious outburst of elation on Saturday 26th of May, when the resounding result was announced.