The anger of the poor can go in many directions.

In the local government elections those who led the war against our movement, a war that claimed the lives of a number of our members, were defeated. The Nigel Gumede administration, an administration that we described as an alliance of gangsters, was removed from power. After the election the new administration approached us to acknowledge the repression that we have suffered, to offer their apologies for that repression and to promise to work with us in a respectful and dignified manner. Many promises were made. 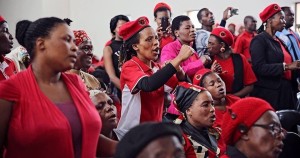 They promised that they would work with us to develop a participatory and corruption free project to develop our land occupations through in-situ upgrades. They promised that they would make reparations to all our members who have suffered repression from the attack on Kennedy Road in 2009 and onwards, including the assassinations in 2013 and 2014. Since these promises were made we have given the new administration an opportunity to be leaders and not monsters that evict and exclude for their own profit and turn to slander, torture and murder when people stand up for their human dignity, their families and their future. Of course we had no reason to believe that their promises would not turn out to be more lies. We know that politicians in our city have never been honest to themselves nor to the city’s residents. But we waited in anticipation for this glorious turn of things. But again all we have seen more lies after more lies. We are committed to assisting our country to get rid of the rule of lies.

In Bhambayi, the Ward 52 ANC Councillor, Zulu, has made it clear that his mandate is to get rid of Abahlali. Councillor Zulu has a deep hate for Abahlali and its leadership and has made it clear that as long as he remains as a councillor he will not entertain Abahlali. On the night of Sunday 26th March, at around 9:00pm, while Abahlali were at a meeting to discuss their future, Councillor Zulu arrived with some men and dropped off a man known to Abahlali. The man opened fire shooting Mr Banele Nyamela, the husband of one of our members, in the back. Mr. Nyamela is now fighting for his life in hospital. It is alleged that the gunman was sent by the ANC Councillor to kill Abahlali Local Council Chairperson Mrs Nyuswa. Mrs Nyuswa has been receiving death threats for some time now. Abahlali in Bhambayi are protesting for decent housing, for unfulfilled promises to be kept, for discrimination against people from the Eastern Cape to be stopped and for corruption in housing allocation to be investigated and suspects to be arrested. The gunman is allegedly working for the eThekwini Municipal Security Guards. He is a known gangster and a warlord who works closely with local councillor and is in ANC structures in the ward. Our members and other people in the community protested through out the night on Sunday and for the whole day during Monday. The tactic that was used was the road blockade. Eventually a number of politicians came to talk but all they offered were lies.

The leadership of Abahlali also continue to receive death threats in Sisonke Village in Lamontville in Ward 74. In this ward the ANC councillor is also refusing to acknowledge Abahlali. The Ward 17 Councillor in eKuphumeleleni continues to harass Abahlali members and to threaten them with eviction even though an attempted eviction was stopped by the court a few years ago. The Ward 56 councillor in eTafuleni continues to harass Abahlali and to swear at them and threaten them. This councillor has likened Abahlali to “colonial British settlers who must cease to exist” saying that by its nature Abahlali are temporal.

The shooting of Mr. Nyamela in Bhambayi in Ward 52 and the harassment and threats against our members in Wards 17, 56 and 74 mean that the Municipality is negotiating with us in bad faith and that we are actually at war once again. All these councillors were reported several times to the eThekwini Municipality Speaker and to the Mayor and yet no action has been taken. We have decided that we will do all we can to protect our communities and the lives of our leaders. We will not wait for another assassination by another councillor. We wish to remind the ANC that two ANC councillors from KwaNdengezi are currently serving life sentences for the murder of our comrades.

If the Municipality was serious about negotiations, and if they were serious about keeping their promises, they would have instructed their ward councillors and their committees to engage Abahlali and not to treat us as the enemy – an enemy that can be freely threatened and even killed. There can be no negotiations without peace. If the new administration in the City Hall wants to continue with the negotiations they must ensure that there is peace and that our members can organise freely and safely in every ward.

We wish to make it clear that should our local council chairperon in Bhambayi, Blessing Nyuswa, come to any harm we will hold the ANC accountable.

We take our humanity, our dignity and our future seriously and we will resist a return to repression with all of our courage and force.

I. Shack Dwellers Movement Fights for Land and Housing S’bu Zikode, president of Abahlali baseMjondolo, the Shackdwellers Movement of South Africa, spoke in New York City Nov. 16 during his tour of the U.S. He […]

26 April 2014 Abahlali baseMjondolo (Shack Dwellers Movement) press statement We Mourn Twenty Years of Unfreedom   Twenty years of shack life has not been easy for us.

“What is the Future for the Youth of South Africa?”