For the past four weeks, the Iranian masses, led by young women, have been demonstrating in the streets of Tehran and elsewhere for nothing less than an end to the Islamic Republic. The catalyst for the protests was the death of Mahsa Amini, 22, following her arrest by the Morality Police on Sept. 16. She was detained because a little of her hair showed beneath her head scarf—forbidden by hijab law, “the most visible manifestation of a theocracy that makes women second to men in politics, in parenting, in the office and at home.” Amini died in police custody, without explanation.

There followed days of protests, with women and girls in the lead. Flinging their head scarves into bonfires, dancing bareheaded before security agents, and cutting off their hair in public, the young women were the very images of defiance. 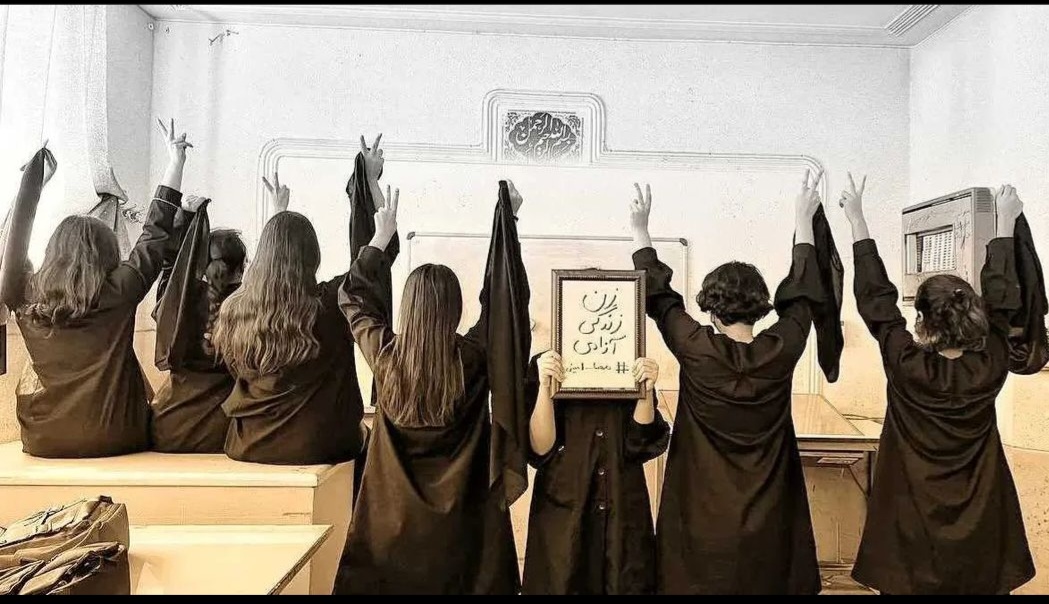 Students take off their hijabs in a classroom. Source: from__Iran Instagram page.]


“I see a lot of anger and a lot of rage in young women,” said Golshan, 28, a women’s rights activist from Isfahan who organized small groups of friends to gather every night to chant, “No to hijab, no to oppression, only equal rights.”

The first night of the protests, Golshan and about 50 other women locked arms to block an intersection, calling on men to join them. One man lit a bonfire. One by one, as the crowd cheered, women pulled their hijabs off, waved them aloft and tossed them into the blaze. “We want to be heard,” she said. “We don’t have one leader. The beauty and strength of our movement is that every single one of us here is a leader.”

Mariam, 34, an artist in northern Mazandaran Province, said she and her friends not only burned their scarves, they cut their long hair and shaved their heads. “It’s a statement that doesn’t need explaining,” she said. “You can’t control me and you can’t define me with my hair.”

The women and girls have been joined by many others to protest ever-worsening economic conditions in Iran. Everyone has been suffering from the economy, exacerbated by US sanctions, which make consumer goods expensive or impossible to find. So their demands were for better economic conditions and equality with men, and, most startlingly, they explicitly demanded the end of theocratic rule.

The current protest movement differs from other mass protests that have broken out since the Iranian revolution in 1979 in two major ways: it is led by women, and it is explicitly revolutionary. Vivian Yee and Farnaz Fassihi at the New York Times remarked that, “Iranian women had participated in protests against the clerical establishment before, but never before had they been spark, leaders and foot soldiers all at once.” The women at the head of the movement are workers, university professors and students, and activists who have gone on strike, taken to the streets, or occupied the universities, calling for the overthrow of the Iranian regime.

The protests were at first daily, now weekly. After a short lull in unrest, the movement reignited on October 8 in a more organized form. That grassroots organizations emerged from the protests is a significant development, given the ban on all independent groups and political parties in Iran.

One such group is calling itself the Youth of Tehran Neighborhoods and has set out to both “organize rallies in the capital” and to call for nationwide protests. Iran International mentions that similar groups have been created in other Iranian cities.

On top of the new organizations, the Iranian masses have begun to strategically coordinate the demonstrations. The Iranian International Newsroom believes the recent protests on October 8 indicated a change in strategy. Instead of the “sporadic demonstrations every day, which is easier to control for the government,” protestors are moving to nationally coordinated weekly protests, which have shown “the government’s inability to suppress protesters when crowds are larger and appear simultaneously in many cities and locations.”

Contrary to the Iranian regime’s claim that the movement has been crushed, the blossoming of organization and coordination signals that the rebellion is drawing from the bravery, intelligence, and creativity of the women and youth to begin more focused struggle.


Women and Girls in the Vanguard

Unlike previous rebellions in Iran, the current movement is led by women. Yee and Fassihi write about the righteous rage of women: “in several of the videos of the uprising that have torn across social media, women rip off their head scarves and burn them in street bonfires, including in deeply religious cities such as Qum and Mashhad.”

They continue to write that “in one (video), a young woman atop a utility cabinet cuts off her hair in front of a crowd of roaring demonstrators. In another, young women dare to dance bareheaded in front of the riot police.” These actions are not purely symbolic; they are a direct concretization of the anti-clerical slogan, “Death to the Headscarf! Until When Must We Tolerate Such Humiliation?” and thus are a direct attack on the power of the theocracy.

Young girls, too, are at the forefront of the movement. According to Iran International, “students, mostly girls in secondary schools…rebelled this week in many areas, refusing to attend classes, protesting inside their schools and chanting slogans on their way home,” and they have taken to burning their hijabs. High school students in Sanandaj, a city in the Kurdish region, joined the demonstrations, chanting, “Women, Life, Liberty!” Also in Sanandaj, workers went out on general strike, closing all the shops.

Scenes from Sanandaj and southern Shiraz reveal the vanguard role of women in the protests. Robin Wright reports in the New Yorker that “young women have marched streets – chanting anti-government slogans and removing their head scarves – and called for drivers to join them. Many cars could be heard honking in support.” Iranian women are calling for a women’s revolution with the support of the masses.


“This is not a protest, it is a revolution”

Another difference with previous movements is that the masses are not demanding reforms. Instead, they are “demanding an end to the Islamic Republic’s rule.” This demand is reflected in chants at the universities and on the streets including “Death to the Dictator!” and “Hey You, this is Not a Protest, it is a Revolution!”

The movement has swept up university professors, students, and activists, who were some of the people who called for nationwide rallies on Saturday, October 8. The Center for Human Rights in Iran (CHRI) counted that on October 1, 111 universities announced they had joined the national strike by boycotting classes.

Workers are joining the protests as well. In Sanandaj, workers went out on general strike, closing all the shops. But worker activity is not limited to the Kurdish regions. CHRI reported that “additional protests by large numbers of oil and petrochemical project workers began in the town of Asalouyeh, Bushehr, as well as in Abadan, Khuzestan Province, one of the biggest oil and petrochemical centers” on October 10. On top of this, just south of Tehran workers have for “the first time in recent years … taken to the streets demanding freedom and revolution.”

Yee and Fassihi write that “soaring prices, high unemployment, corruption, political repression and the law requiring women to dress modestly and cover their hair” are reasons for the rebellion, and that “the sorry state of Iran’s economy is one of the main forces spurring Iranians into the streets to demand change.” These problems could be exacerbated in the near future as the United Kingdom, the United States and Canada have all moved to impose new sanctions on Iran.

The response of the police has been brutal. CHRI reported that “at least 185 people—including 19 children—have been killed…with at least 90 deaths reported in Zahedan, Baluchestan Province,” and that “more than 1,800 people had been arrested as of October 10, according to Iranian government tallies.” Yet, CHRI tells us that this government number is “likely a significant underestimate.” Niloufar Hamedi, the journalist who made Mahsa Amini’s death public, has been arrested and is being held in solitary confinement in Evin prison.

Predictably, the Islamic regime is spreading misinformation about the protests. Al Jazeera reports that “the government has described the protests as a plot by Iran’s enemies including the United States, accusing armed dissidents – among others – of violence in which at least 20 members of the security forces have been reported killed.” While the government blames outsiders, and blocks access to the internet, “semi-official news agencies played down the protests.”

OWFI Call to Liberate the Iraqi Women Detained by Daesh

Reprinted from the Organization of Women’s Freedom in Iraq (OWFI) On June 10, the occupation of the city of Mosul started a new chapter of women’s suffering in Iraq. Daesh (ISIS) reawakened the ancient tribal […]

Thoughts on US Election from Initially Reluctant Voters

November 21, 2020 by MHI Resistance to Trumpism

A Native American, a young student, and a former union employee each took different paths in deciding to vote. They are glad they did, and see the challenge ahead. […]