The US withdrawal from its 20-year occupation of Afghanistan has enabled the Taliban to take over the entire country and impose its strict form of fundamentalist religion. Incredibly, the US military withdrew without planning how it would save the tens of thousands of Afghans who have worked for it as translators, drivers, etc., and who are now being slaughtered by the new rulers. The US is belatedly trying to get them and US civilians out of the country, as towns, cities, and the national government have all surrendered to the Taliban within the last few weeks.

Rule by the Taliban is an incomparable tragedy for the Afghan people. We know what happened when the Taliban controlled the country previously. Its brand of fundamentalist Islam means that men will be murdered and women and girls will be enslaved. Females will be forbidden to go to school or work, and will lack even a semblance of protection from being married off as children and enslaved by their husbands, fathers and in-laws. There is already a humanitarian crisis, as nearly 400,000 people have fled their homes seeking safety. 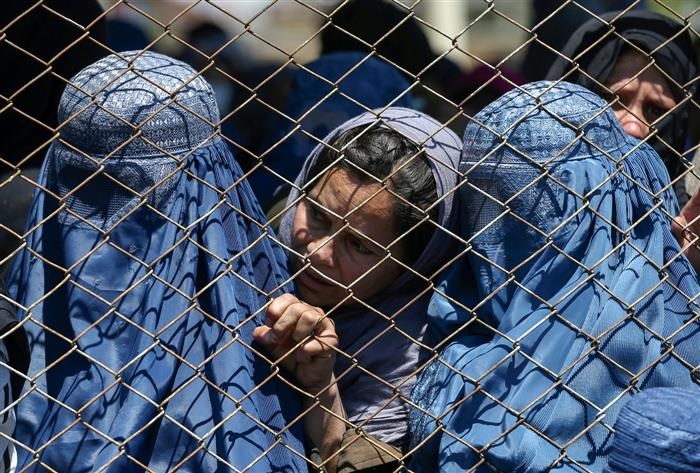 Local feminist groups such as RAWA (Revolutionary Association of the Women of Afghanistan), which always functioned underground, and internationally-funded groups who run women’s shelters and schools, such as Women for Afghan Women, will be shut down, and their staffs and clients will probably be killed.

Women for Afghan Women has issued an appeal for funds to save lives; you can donate through its website.

The Bitter Fruits of Imperialism

This is not to say that the US should have continued its occupation. It never should have invaded 20 years ago nor occupied the country ever since. It always should have gotten out. Anti-imperialism is a principle of Marxist-Humanism. But it is incredible how badly the US withdrawal is being carried out, without first saving the thousands of Afghans who worked for the US forces and other people who are most vulnerable, such as the feminists and trade unionists. Those not already killed in the last few weeks will be killed now. In addition, of course, the US is endangering the remaining US military and embassy personnel and the troops being sent in to rescue them.

How could Biden have been so misadvised as to what would happen when the US withdrew? He announced the withdrawal of the US months ago, and had nearly completed it, all apparently without any plan to save the translators and other workers, nor even the US embassy’s personnel. Whereas he can’t be blamed for the colossal failure of the US nation-building effort over the past 20 years, which wasted trillions of dollars on a government that never governed, the failure to plan a safe withdrawal is on him and his advisers.

Cheerleaders for US imperialism will say the US should have remained in occupation and will make hay out the tragedy. Republican reactionaries (is there any other kind of Republican now?) will make hay out of Biden’s incompetence. And while US intelligence and security efforts have recently prioritized the fight against domestic terrorism coming from Trumpites and other right-wingers, we can expect that they will now focus once again solely on foreign Islamicists.

The international ramifications of the US withdrawal are staggering. The Taliban will likely harbor international terrorists and destabilize neighboring countries. Pakistan never stopped exerting its power in Afghanistan; Iran is very involved too, as are other Gulf states, not to mention China and Russia. Each one of them will be arming and aiding factions of the Taliban and of the warlords who may well fight Taliban rule, as they have in the past.

It is totally insufficient to oppose US imperialism alone, especially these days, when every decent-sized nation is an imperialist. Most importantly, it is insufficient to oppose only the outside aggressor when your own rulers and would-be rulers are oppressing you. What made Afghan feminists such as Malalai Joya great was their opposition to the US occupation, and the civilian government installed by the US, and the Taliban, and the warlords. I heard Joya speak in 2010; she made this point, and I discussed it from the floor (see this MHI editorial, especially the last three paragraphs).

The National Organization for the Iraqi Freedom Struggles (on the web at NO-IFS) sponsored the panel “Building Solidarity with Iraq’s Civil Resistance” at this year’s Left Forum.