This year’s Finnish Independence Day, on 6 December, saw a small decline in far-right activity compared to previous recent years. The fascists gathered for their 612 torch march for the fifth year in row, and their march was immediately followed by the “Kohti vapautta” (literal translation: “Towards Freedom”) Nazi march, held for the third time. An anti-fascist counter march, called “Helsinki without Nazis,” was organised for the third time, and once again, it drew a bigger crowd to the streets than the neo-Nazis drew.

Despite their organisation being banned in September 2018, the Finnish section of the Nordic Resistance Movement (NRM) went ahead with their Nazi torch march in the streets of Helsinki. Up to 300 marchers chanting Nazi slogans were led by a row of people carrying flags with swastikas. As has become usual, the NRM’s march was joined by a handful of international members from Sweden, including the organisation’s Swedish leader, Simon Lindberg.

The police confiscated the swastika flags and arrested four people – they later announced that the arrests were on suspicion of incitement to ethnic or racial hatred. In a video filmed by a Nazi marcher, the police are seen to discuss and ask the Nazis to remove the flags before forcefully taking them down. The loud yelling in the video is mostly by counter protesters shouting “shame on you” and “there is no room for your ideologies, Nazis f ***off”.

Marchers could be seen wearing NRM’s symbols as well as caps and jackets with “Soldiers of Odin” and carrying banners with slogans criticising the “political (meaning biased) police” and “make Finland safe again”.

As in previous years, the NRM march joined the other far-right march, called 612. The 612 parade is now an established feature of Finland’s Independence Day. The racist Finns Party chairperson and member of European Parliament, Jussi Halla-aho, was seen attending the 612 march this year. He insists that the participants are “honourable people, and definitely not Nazis”. Laura Huhtasaari, presidential candidate in 2016 and politician for the Finns Party, encouraged people to join the march and was delighted by the turnout in 2017. This year’s  612 march was attended by approximately 1300 people.

Esa Holappa, a repentant former racist now turned anti-racist and anti-Nazi, tells a different story about the origins of the march. Holappa was one of the founders and a former chairperson of the Finnish Resistance Movement (FRM), before it was rebranded as part of the wider NRM. He claims that the FRM and Suomen Sisu (a group with an explicit pro-Nazi history) worked hand in hand when founding the march back in 2014. He points out that it was FRM who built the march’s official webpage, 612.fi. It is absurd that these far-right politicians would insist that the parade is not racist or does not have ties with FRM or NRM, when the founder of FRM states the opposite.

The Helsinki Without Nazis protest was held for the fifth year in a row and was attended by 2000 demonstrators. This year, we saw a new development in the resistance, with a spontaneous march called “Kallio Without Nazis”. It was planned upon hearing that the Nazi’s would be changing their previous route and would be marching through the Kallio district. Kallio is known for its counterculture, sexual minorities, immigrants, feminists, homeless people, lefties, and anarchists, i.e., those that NRM talk about when they chant “get the dirt out of the country”. Hundreds in Kallio greeted the Nazis with rainbow flags, “refugees welcome” slogans, and with shouting and banners telling them to “f*** off”. 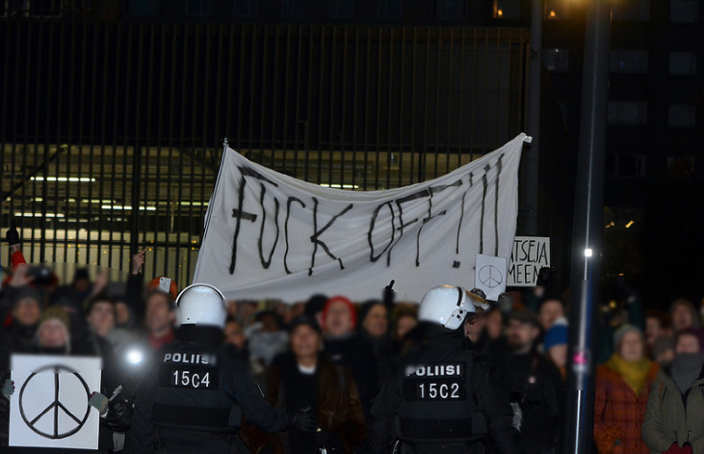 Many who attended the Kallio Without Nazis demonstration later joined up with Helsinki Without Nazi’s. Pinkkimusta Helsinki – Pink & Black Helsinki, a queer anarchist collective, formed their own block at the demonstration. The demonstration met at Narinkkatori in central Helsinki where speeches and music performances were heard. This video has images from the Helsinki protest, accompanied by a song from a German punk band. In the speeches, Harri from Vapaa Liikkuvuus – Free Movement, commented on a study released a week earlier, that found Finland to be the most racist country in the EU. Harri asserted that racism, fascism, and discrimination have no place in Finland, and they must be fought on all fronts.

Antti Rautiainen, who is associated to the anarchist A-ryhmä group, spoke about the dangers of normalising far-right activity, and the collaboration between True Finns and NRM. His warnings were vindicated by the fact that the True Finns MP, Jussi Halla-aho, joined the fascists in this year’s 612 march.

In this episode of “Radio Free Humanity: The Marxist-Humanist Podcast,” we draw lessons from Karl Marx’s political writings to better understand the political orientation needed today to best fight the scourge of white nationalism.

Plus, current-events segment: the renewed push for Trump’s impeachment.