See also Eve Currie’s new article, “Irish Women: ‘Only We Can Represent Ourselves’”

On 27 October 2017, University College Dublin (UCD) witnessed its biggest ever voting turnout when students voted overwhelmingly (69%) to impeach their student union president, Katie Ascough, after she stopped information on abortion from being published in a student newspaper. Through their actions, UCD students struck a blow for student power by achieving the first ever impeachment of a standing student union president.

By directing Euro 8,000 (US $9,350) from student union finances towards the re-printing of literature to ensure it didn’t contain information on abortion, Ms Ascough effectively sealed her fate in the eyes of impeach campaigners. They accused her of repeatedly acting contrary to the union’s position of opposition to Ireland’s strict anti-abortion laws.

Ireland is one of the few remaining countries where abortion is illegal, a matter enshrined in its constitution due to the power of the Catholic Church. One commentator described the UCD event as the first major skirmish ahead of the planned referendum on the repeal of the 8th amendment, which was voted into the Irish constitution by referendum in 1983. This amendment, due to be voted on in early summer 2018, equates the right to life of a foetus with that of the woman in whom it resides, and creates an unworkable distinction between a pregnant woman’s life and her health. However, while Ascough’s impeachment is significant in that it indicates the strength of opposition to Ireland’s near total ban on abortion, it is not remarkable in substance, as there already exists a growing wave of activism by a new generation of pro-choice campaigners. 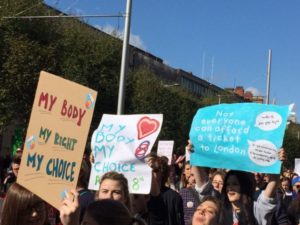 Biggest Marches for Choice this year

This September saw the biggest March for Choice rally yet. Coordinated by Abortion Rights Campaign (ARC), this annual march, in its sixth year, achieved an estimated 40,000 participants in Dublin alone, with thousands more marching in solidarity in towns and cities the length and breadth of Ireland. This year’s rally was also accompanied by international solidarity events in more than 20 cities, in over 7 different countries, as Irish emigrants continue the two-way flow of ideas between pro-choice campaigners in different countries. And this international angle is just one aspect of the growing wave of activism.

Within Ireland, the abortion issue has broken the traditional divide of urban populations being the source of radical social action and rural populations tending towards traditional Catholic morality. Helped by campaigners’ determination to bring their message to those in outlying areas, this year’s March for Choice was preceded by an Abortion Rights Roadshow, coordinated by ARC and delivered by volunteers across the country. This brought the issue of Ireland’s shameful anti-abortion stance out onto the streets of towns in every county in Ireland, and helped precipitate the huge numbers of participants at this year’s annual march.

Migrants and youth on the offensive

Another significant aspect of the growing wave of activism is the direct participation of migrants in campaigning for repeal of the 8th amendment. Migrants and Ethnic Minorities for Reproductive Justice (MERJ) is an example of a group that was formed by migrant women ahead of this year’s March for Choice, in order to highlight the disproportionate disadvantage they face as a result of the 8th amendment, and to push for its repeal.

There is literally a new generation of women, and men, that have become involved in politics through this issue. Coordinated through social media, the front square of Trinity College Dublin (TCD) was the meeting point for the student bloc entry to this year’s March for Choice, with close to 1000 students gathering there from across the country before the march even began. 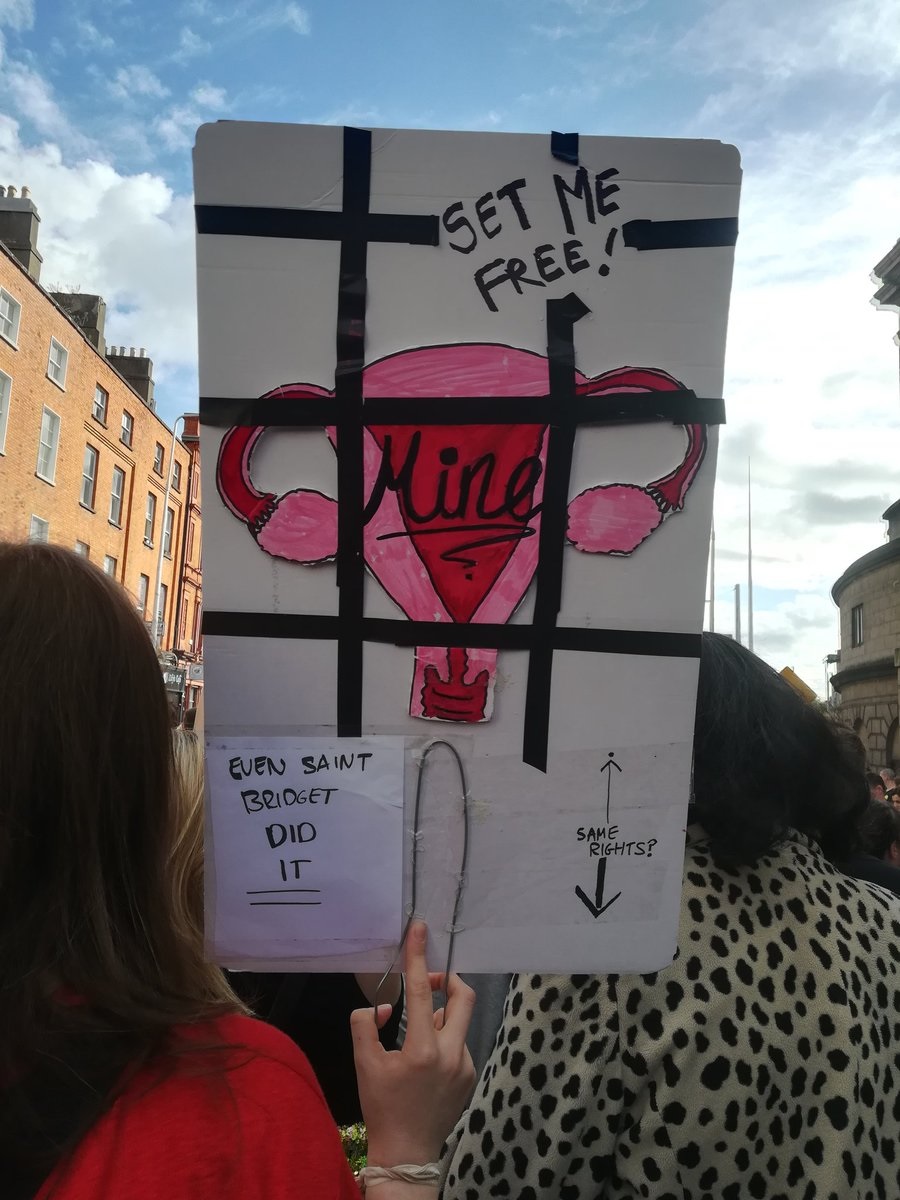 Across all this activism there is a palpable shift in the tone of campaigning that is taking place. For too long women have been fighting the horrendous consequences of Ireland’s shameful ban on abortion on a daily basis, and all too often campaigning has been in the wake of some of the most deplorable instances of injustice. One of the most poignant instances in recent history is the death of Savita Halappavanar as a direct result of Galway University Hospital’s refusal to perform a lifesaving abortion following her miscarriage in 2012. And Ireland’s courageous pro-choice campaigners have fought Church and State with absolute determination that the fatal injustice that Savita and her family suffered never be repeated.

Moreover, through their campaigning, pro-choice activists are carving out a new position for themselves, and it is one in which they are no longer on the defensive. You can see it in the words on their placards and in the confidence shining across their faces. This year’s march was celebratory. Humour, confidence and defiant anger are four words that best sum up the range of slogans on display, and underscore the shift from campaigning against something towards campaigning for something. This shift is important because it signals that women are setting the agenda, and helps us envisage a future society, better than the one we have today, and one in which we would be happy to bring up our daughters.

For a long time, Ireland has been a beacon to anti-abortion campaigners across the globe. It has argued that women’s rights should be subordinated to the rights of foetuses, and complained when organisations such as the United Nations have criticised Ireland’s strict anti-abortion laws. As the rest of the world began moving forward in the 20th century, Ireland’s conservative right began to panic. Ireland felt the impact of the 1967 British Abortion Act, legalising abortion in a range of circumstances, and the 1973 U.S. Supreme court ruling in Roe v. Wade recognizing that women have the right to abortion under the U.S. constitution.

In the same year as Roe v. Wade, the Irish Supreme Court upheld a married couple’s right to import contraceptives for their own use, finding a right to privacy. This completely unnerved the anti-abortionists. Fearing it meant Ireland was just one step away from legalised abortion, the Pro-Life Amendment Campaign (P.L.A.C.) was launched for a constitutional referendum to reinforce Ireland’s anti-abortion credentials. The campaign was successful in that the 8th amendment was passed by a two-thirds majority (67% to 33%), but the low voter turnout (53%) meant that the argument had not been won.

Since then, the Catholic Church’s standing in society has been eroded. Ireland’s 2015 referendum on gay marriage marked this decline, as 62% of voters defied the Catholic Church’s directives by favouring the legalisation of same-sex marriage. This made Ireland the first country in the world to legalise same-sex marriage by popular vote and marked a milestone in Ireland’s journey towards a more liberal, secular society.

And this is the context in which we can understand how Ms Ascough’s impeachment signals the ongoing rise of a new generation of activists who are helping set the agenda on women’s rights by shaping the campaign on reproductive rights.

March for Our Lives in Philadelphia: School Safety & Human Freedom

Brendan Cooney reflects on Philadelphia’s student movement, which joined the nationwide Marches for Our Lives while retaining its own character and concern for the interests of Philly’s predominantly Black and Latino school population. […]