[Ed. note: This group is affiliated with the South African Shack Dwellers Movement; see our earlier articles on the Shack Dwellers and their youth movement.]

As a movement of the poor we have taken great inspiration from the rebellion that has spread from Tahrir Square in Cairo to Syntagma Square in Athens, the Puerta del Sol in Madrid and now Liberty Plaza in New York. Our comrades in Students for Social Justice have been just as inspired by the growing spirit of rebellion that is jumping, like a fire, from country to country.

On Saturday we will occupy Grahamstown. The students will march into town from the Botanical Gardens. We will march into town from the township and the squatter camps. We will meet on the square at the Cathedral. We will turn that square into a people’s university, a people’s kitchen and a space of people’s power. Our aim is to bring the rebellion of the poor, the rebellion that has put thousands and thousands on the streets of South Africa in recent years, into dialogue with this global rebellion. The alliance between organised students and the organised unemployed is strong in Grahamstown. Together we can build strong foundations for the struggles to come.

We will occupy Grahamstown in the name of justice. We join the people of the world in insisting that we will not pay for the crisis caused by the bankers. Their wealth must be expropriated and returned to the people. South Africa is the most unequal society in the world. The predatory elite are publicly gorging themselves while the poor are starving, desperate and frightened. Last week Transnet advertised for 30 jobs – 30 boring and badly paid jobs. Ten thousand people came to apply. Forty people were injured when the gates were opened. The contempt with which the poor are treated in this country is incredible.

It is not just the ANC that treats the poor with such gross contempt. Business is just as bad. We have not forgotten how the big companies colluded, in the midst of mass unemployment, to fix the price of bread. When we are strong enough we will fix the price of bread from below. We will take the struggle for bread that was started in Durban forward. Imagine one day when people around the country enter the supermarkets and begin eating the bread without paying. That will be the last day on which the capitalists fix the price of bread.

We are not asking for higher taxes to increase funding for the state. Our municipality is a notorious kleptocracy. The ANC is corrupt from top to bottom. We do not want to struggle to buy Blade Nzimande a new car or more houses, cars, watches and sushi parties for Julius Malema and his friends. We do not want to struggle to finance Kebbelism. What is the point of the ANC getting more money to build houses when the houses that they build are unfit for human habitation, fall down in the first wind and are only given to ANC members? 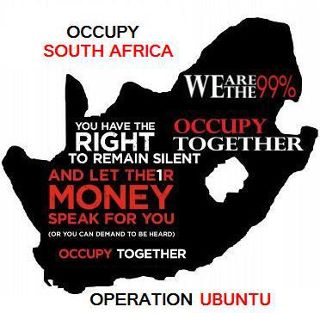 We are not anti-state. But our state is rotten to the core. Until we can build enough people’s power to be able to discipline the state from below we will have to treat it as what it is, a vehicle from the predatory elite to feed off society.

The capitalists in Europe are saying that the people must pay for the banks to be recapitalised. We say that it is time to stop all public subsidies for the rich. We say that it is time for the banks to recapitalise the people. Abahlali baseMjondolo has correctly insisted that the poor were made poor by the same economic system that made the rich rich. Therefore it is only logical that the billions and billions held in the banks on Wall Street must be used to recapitalise the poor. We are calling for a universal guaranteed income. It must be at least R2000 per month and it must be paid to all people without going through local councillors or party structures.

Some of the comrades that were amongst the ten thousand in Bloemfontein are coming to Grahamstowm to learn from our struggle. Ayanda Kota was recently in Durban to be at the Abahlali baseMjondolo AGM. We are, day by day, building a national movement of the poor, by the poor and for the poor from the ground up. Every day our struggles and our movements are drawing closer.

Editor’s note: We received the following letter from a friend who is helping to establish the first-ever women’s hot-lines in Kenya and South Africa.

by Your Culture Critic Bring Dear Mandela to Your City! Dear Mandela This up-close, vivid documentary features young members of Abahlali baseMjondolo, the Shack Dwellers Movement, in their struggle against the practices of the South […]

“What is the Future for the Youth of South Africa?”