Editor’s note: This is our third article from a Nicaraguan who is living through severe government repression against the country’s population, which has been in continuous protest since April. The opposition demands that the Ortega government (of the FSLN party, the Sandinistas) step down. See the earlier articles here and here.

The barricades raised all over Nicaragua during the months of massive protests were destroyed by the government’s paramilitary and the National Police, just before the celebration of the Sandinista Revolution on July 19. Paramilitary troops and police arrived in caravans at different cities and roads, destroying the barricades and killing and persecuting the people who were fighting back. Some protesters were killed, and others ran away to the mountains or across the frontiers with Costa Rica and Honduras to escape death or jailing.

The paramilitaries then went the houses of the people who had manned the barricades, looking for them and taking away some of their relatives. They also put in prison those who had collaborated with the protesters by giving them medicine, food and clothes. We named this process “hunting” (cacería). Most of these events were recorded on people’s cell phone and shared with the world.

Although the Political Constitution of Nicaragua says that Nicaraguan citizens have the right to protest, the government claims that the mass protests were crimes of terrorism or organized crime. For such crimes, you are sentenced to 25 years in jail.

When you are arrested, you are taken to a center called el chipote. This prison is located in the center of Managua. It has been used for the purpose of keeping political prisoners since 1934, when it was built by the government of Anastasio Somoza (the U.S.-backed dictator who was overthrown in the Sandinista Revolution of 1979). Somoza called this prison la curva. Now the Ortega-Murillo regime calls it el chipote, the same name as the mountain where Sandino fought against the U.S. marines in 1927. Of course, its purpose is not the same!

The Ortega-Murillo regime wants to bring the Nicaraguan people to their knees. They bring citizens to the chipote from different parts of the country. This creates anguish for the relatives because we know that it is a torture center. Prisoners are obliged to say they will not continue to participate in the protests against the government. According to testimonies of young people who have been in the chipote, they suffered tortures such as burning of genitals with cigarettes, extraction of nails, sexual violation, beatings, sleep deprivation, keeping them on their knees for long hours, not giving them food or allowing  their relatives to bring them food, and intimidation by threats to burn their relatives.

Another abuse by the government is to take the prisoners to a court outside their cities of origin; such was the case of the peasants and two young people of the Caribbean Coast who were brought to Managua, causing great inconvenience to their relatives to assist them.

Under pressure from the population, national and international human rights groups, and solidarity abroad, some of the prisoners have been released. They are then taken to a jail located in Tipitapa, Managua, known as la model. They are not allowed to receive visits, as the regulations of that prison provide. Political prisoners have only been allowed one visit since they were imprisoned.

Such as the case of the peasant leaders Medardo Mairena and Pedro Mena, who were arrested at the International Airport of Managua when they were about to board a plane to the USA. They were going to participate in solidarity events in Los Angeles. Now they are accused of killing four policemen. This is not true because a lot of people saw him Mr. Mairena in a march called “together we are a volcano” that took place in Managua, and it is impossible that he could have been in the South Caribbean, where the killings occurred, at the same time as the march. Those policemen were killed by other policemen.

Aggression, threats and intimidation are made through social networks by supporters of the Ortega-Murillo government. They create false profiles. I received two messages from fake profiles on Facebook. One of the messages came from a family member of a Sandinista student. His language was offensive. Among other things, he told me I was one of the people who want to strike against the state, a terrorist and a traitor. The second message also was offensive. It said that I participated in all the marches, and included information about my family. At first I was terrified.

During these four months of protests, I have been sharing information and making comments on social networks. Most of my followers are alumni and friends. At this moment, I have deleted from my contacts lists all the people who are sympathetic to the FSLN, since I do not trust them, and my purpose for being on social media is to keep people informed of our struggle.

Doctors and teachers who helped the participants in the protests have been dismissed from their jobs. The FSLN controls everybody.

We have to be brave in this fight. Removing a dictator is not easy and convincing a FSLN supporter is impossible. The FSLN has lost the support of the people who used to sympathize with them.

Those who oppose the government of Ortega-Murillo are called autoconvocados (“self-convoked” or self-organized) or “blue and white,” in honor to the colors of our national flag, flown at demonstrations. They send out invitations to join up through radio, television and social networks. They are completely unlike of the Sandinista government, which organizes its marches in state centers and institutions. 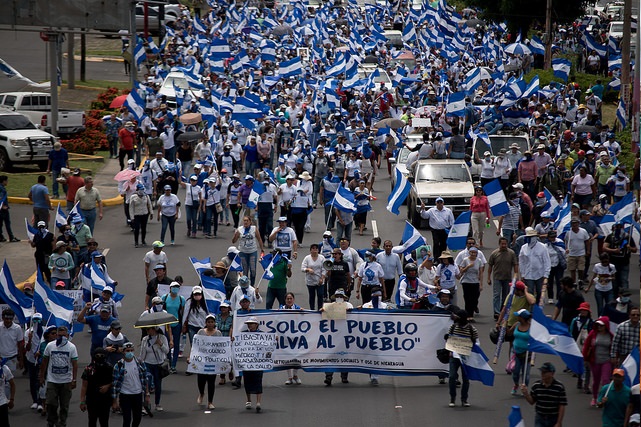 The government makes participation compulsory, and its demonstrations take place during working hours. People are assigned transportation and given money for participation. If someone does not attend these marches, he is fired. It is evident that none of their marches has ever been attacked; however, the marches of the autoconvocados are guarded very closely by paramilitary troops, who have wounded and killed many protesters.

Generally, the government conducts countermarches the same date and the same time as the autoconvocados does. Most of the population that expresses itself in the opposition protests used to be supporters or members of the FSLN, but since April 19, when they first saw the government massacring citizens, they stopped sympathizing with the government, because no Nicaraguan should ever have died.

This has brought much sadness to the country. People now say they have nothing to celebrate in their communities, where they usually performed carnivals or religious celebrations. NICARAGUA ESTÁ DE LUTO.

Arrests of the Leaders and Organizers of the Marches 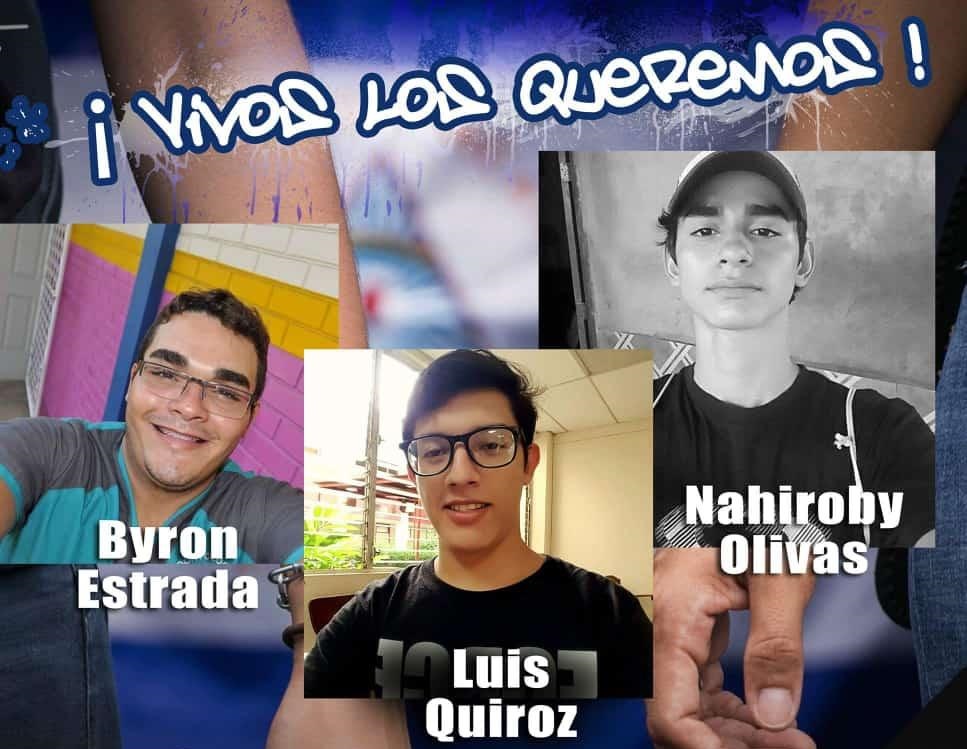 The Ortega-Murillos regime is arresting all the leaders who organized the marches. The police and paramilitaries occupy the squares and streets where the arrests are carried out. For example, this weekend, a caravan of protesters from Managua was going to be made to the city of Granada, and the entire highway was invaded by vehicles belonging to the government’s public institutions. In the end, everyone mobilized by their own means and a march was organized in Granada, in which thousands of people participated. 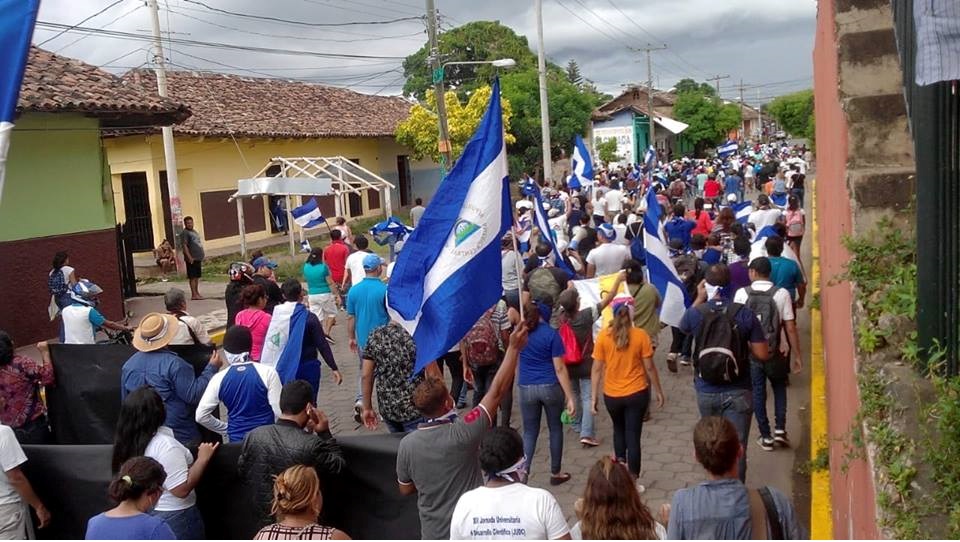