A major dispute over the causes of the latest capitalist economic crisis, and how to respond to it, has erupted in the Committee for a Workers’ International (CWI), an orthodox Trotskyist organization. Its largest section, the Socialist Party of England and Wales (SP(E&W)), is one of the remnants of the Militant Tendency that was expelled from the British Labour Party in the early 1980s.

A growing group of dissidents in the CWI contends that the organization pays lip service to the crisis theory of Karl Marx, but actually bases itself on the underconsumptionist theory of Monthly Review and on Keynesianism. The leadership acknowledges that it rejects what it calls the “dogmatic theory that the tendency of the rate of profit to decline explains the present crisis.”

Marxist-Humanist Initiative (MHI) regards this debate as a very important and very welcome phenomenon. Indeed, we hope that it is just the first of a series of similar debates that will take place throughout the left. Fundamental rethinking about the causes of the crisis and the continuing recession conditions is much needed and long overdue.

Far too many left groups uncritically repeat statistics and analyses produced by liberals and by large union bureaucracies and think-tanks like the Economic Policy Institute that rely heavily on union funding. Not surprisingly, the frequent result of the left’s over-reliance on such sources is the claim that capitalism is in fine shape, thank you; the problem is simply that the fruits of its remarkable success are being distributed very unevenly.

This line of argument was always implausible. But now, with the global economic crisis in its seventh year, we think it has become downright fantastical. The global economy limps along year after year with no boom in sight.

In the case of the U.S., this malaise can in no way be blamed on austerity policies. Since the start of the Great Recession, the federal government’s debt has shot up by an unprecedented 86%. The additional borrowing has fueled an extra $8 trillion worth of extra government spending and reduced taxes. Yet economic growth remains exceptionally weak and the percentage of people who have jobs hasn’t recovered at all (see graph). 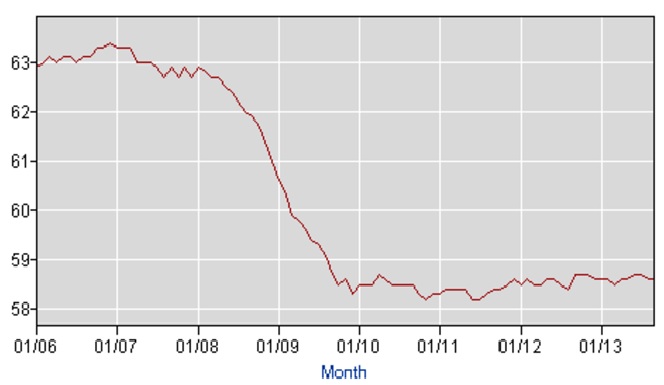 Employed people as a percentage of U.S. adult population

Surprisingly, in its response to the dissidents in its organization, the leadership of the CWI has focused much of its counter-attack against the work of Andrew Kliman. Kliman is a Marxist-Humanist thinker and economist who has no affiliation with the CWI. However, his 2012 book, The Failure of Capitalist Production, is among the works that have informed the dissidents’ critique of the CWI’s economic analysis and policy proposals.

The leadership’s first major statement on the dispute, issued six weeks ago, is a 12,000-word document entitled “The Causes of Capitalist Crisis; Reply to Andrew Kliman.” It was written by Peter Taaffe, the general secretary of SP(E&W), and Lynn Walsh, its main economics writer. Much of the piece by Taaffe and Walsh is not about the economic crisis, but a scathing denunciation of the Marxist-Humanist philosophy and politics articulated by Kliman in his book and in With Sober Senses. Taaffe and Walsh argue that the internal opposition in their organization is guilty by association: “There is a very simple aphorism in judging individuals and political groupings: ‘Show me who your friends are and I’ll show you who you are.’” This comment is particularly ridiculous in this case, since the CWI dissidents have little in common with Marxist-Humanism except that both take Marx’s crisis theory seriously.

Shortly after the piece by Taaffe and Walsh was published, the dissidents responded with “What is the cause of the current capitalist crisis?: Critical Document on the CWI position,” which has been republished in “Marx Returns from the Grave,” a popular blog published by Bruce Wallace. Wallace, who belongs to the CWI’s Scottish section, is a leading member of the opposition.

Two weeks ago, Kliman published the first two parts of his own reply, entitled “Whole Lotta Mistakin’ Going On: A Reply to Taaffe, Walsh, and the Executive Committee of the Socialist Party (England and Wales).” In response to Taaffe and Walsh’s charge that he, and the CWI dissidents, adhere to a dogmatic theory, Kliman wrote,

Taaffe and Walsh feel entitled to reject any evidence that fails to confirm their preconceptions. There is a word for this: dogmatism. …

Ironically, Taaffe and Walsh accuse me of having a “dogmatic theory.” But this is just meaningless invective, because there’s no such thing as a dogmatic theory. Dogmatism has nothing to do with what one claims. It is a method of argument––the method of appealing to a premise that is not to be questioned, i.e., a dogma—whether the dogma one appeals to is the myth of creation or the myth that neoliberalism was a smashing economic success.

Another facet of the controversy concerns the SP(E&W)’s invitation to Kliman to speak at its “Socialism 2013” conference in London. As the dispute within the CWI deepened, this invitation was withdrawn. However, in an e-mail message to Kliman, the leadership of the SP(E&W) also asserted that “We have never avoided debates on important issues, and will not do so on this occasion.” It invited Kliman to two public debates, one in London and one in the U.S.

Other organizations that have publicly taken notice of the dispute within the CWI include the Communist Party of Great Britain and Workers’ Liberty, another British radical organization.

Good evidence and good arguments seriously call into question the left-liberal myths that neo-liberalism triumphed over the working class and that the remedy for crisis is redistribution of income or wealth. We decry the near-total silence with which the evidence and arguments have been met. Kliman has been reviled for even questioning the left-liberal story. If the left is going to have any relevance to social movements in coming times, it better begin some real debates over these issues. The dispute that has erupted in the CWI is a good beginning.

MHI stands with Ukraine, as it fights for national self-determination against Putin’s imperialist invasion. We stand with the pro-democracy and antiwar forces opposing Putin within Russia. […]

Foreign Editions of The Failure of Capitalist Production

A Greek translation of Andrew Kliman’s 2012 book, The Failure of Capitalist Production: Underlying Causes of the Great Recession has recently been released. In the first half of June, he will travel to Athens to […]

Audio: On Value Theory, Intellectual Honesty, and Marxist-Humanism: “From Alpha to Omega” Interview with Andrew Kliman