As nuclear war clouds loomed, and concerns over Donald Trump’s emotional stability mounted, members and supporters of Marxist-Humanist Initiative (MHI) met to discuss and adopt our new Perspectives thesis, Resisting Trumpist Reaction (and Left Accommodation): Marxist-Humanist Initiative’s Perspectives for 2018. This 30,000-word document provides our analysis of and response to: Trumpism and leftist accommodation to it; the Resistance; left-populist economics; “post-truth” politics; white nationalism; and individual responsibility for the collective development of Marxist-Humanism. The membership of MHI adopted these Perspectives on December 10, 2017.

To read and download the several parts of the Perspectives thesis, click on the “pdf” icons below. 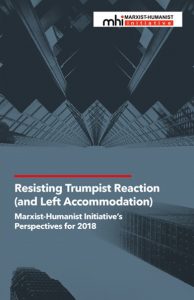 Resisting Trumpist Reaction (and Left Accommodation) is now available as an 88-page bound pamphlet for only $5.

We encourage everyone to share these Perspectives widely and to discuss them with colleagues, friends, family–and with us. Beating back and transcending the latest wave of reaction requires wide and deep discussion among everyone fighting to protect existing freedoms and to continue the struggle until we achieve full freedom for all human beings. If you share these aims, please seriously consider joining MHI and working with us in the critical battles ahead.

THE RESISTANCE: A PERMANENT STATE OF REVOLT AGAINST TRUMPISM

INDIVIDUAL RESPONSIBILITY FOR THE COLLECTIVE DEVELOPMENT OF MARXIST-HUMANISM

[Editor’s note, Feb. 9, 2018. A sentence in the original version of this article, about how to obtain the whole Perspectives thesis as a single document, has been removed. MHI will soon publish a printed and bound version of these Perspectives.]

Yesterday, Marxist-Humanist Initiative (MHI) invited Doug Lain to discuss his disagreements with MHI’s implacable opposition to Trump and Trumpism. Lain is publisher of Zero Books, and a science-fiction writer and podcaster. In the past, he […]