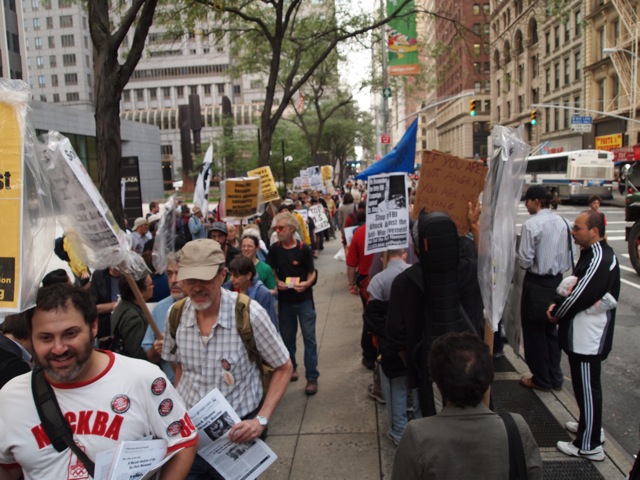 NYC demonstration at the Federal Building against the FBI raids, Sept. 28
MHI demands the U.S. stop attacks on Left activists;
MHI calls on the Left to cease “lesser evil” politics and to support liberation struggles

MHI condemns the FBI raids on Left activists that took place Sept. 24 in Minneapolis and Chicago. In Minneapolis, six Left and peace activists had their homes searched and their records, computers, and cell phones confiscated. Additional raids took place at an anti-war group’s office there and at two homes in Chicago. Those raided included some leaders of the 2008 demonstrations at the Republican Convention and people associated with one of the two Freedom Road Socialist Organizations.

The raids may have been precipitated by a meeting three days earlier between Iranian President Ahmadinejad and 100 Left activists in New York City. We condemn that meeting because those Leftists gave apparent support to Iran’s murderous and repressive regime by endowing Ahmadinejad with legitimacy, as if he were some kind of fellow peace activist. On the contrary, we stand with the thousands who demonstrated against Ahmadinejad and in solidarity with the people of Iran who want to end his rule.

The FBI raids on Friday were carried out with warrants issued under post-9/11 anti-terrorist laws. The government claims to be investigating violations of the law that prohibits Americans from giving “material support” to “foreign terrorist organizations.” Some of the raided activists had made trips to Palestine, Lebanon, and Colombia, and presumably the government suspects them of having contact with organizations it has named as “terrorist.” The FBI also served subpoenas on those raided and on other activists to appear before a federal grand jury in November, a total of eleven people in Illinois, Minnesota, and Michigan. Grand jury investigations were frequently used in the 1970s and 80s to harass and intimidate Leftists, without uncovering any “crimes.”

Protest demonstrations against the raids have been called in many cities. We hope they will address not only the raids, but also the use of grand juries and the post-9/11 laws that threaten our civil rights. Sweeping anti-terrorism laws make it illegal to give “material support” to any foreign organization that the government lists as “terrorist.” The list constantly changes. People have been prosecuted for giving money to groups they believed were using it for education or social services. We recently heard a federal judge describe publicly a case he presided over (and clearly thought was ridiculous) in which the defendant had done nothing more than translate some documents for a listed group, one that opposed the Iranian government. If the U.S. government brought that case, you can imagine what it will do to people whom it suspects of giving actual material aid to groups that support its enemies––and to people the government wants to silence because their movements threaten U.S. stability internally.

Laws adopted after 9/11 have been used to jail, deport, and harass innocent people in the U.S. who come from the Middle East, and to prosecute and harass Americans for their political views. We are seeing increased police and federal surveillance of demonstrations, preventative raids on and arrests of activists during periods leading up to demonstrations, and other dangerous erosions of our civil rights, including the right to free speech, which we had believed were constitutionally protected.

Friday‘s raids appear to be an attempt by the government to see how much it can get away with in terms of repressing Leftists, without engendering public opposition in the process. We are on a slippery slope if we do not widely condemn and resist these laws and actions.

We are also greatly disturbed by the fact that 100 U.S. Leftists chose to meet with Ahmadinejad when he was in New York for the opening of the UN session last week. The participants were reportedly from anti-war, labor, alternative media, and Iranian and Palestinian solidarity organizations. Among them were Sarah Martin of Freedom Road Socialist Organization, Margaret Sarfehjooy of the Minneapolis-based Women Against Military Madness, former U.S. Attorney General Ramsey Clark, former Congresswoman Cynthia McKinney, Sara Flounders from the International Action Center, Brian Becker of the ANSWER Coalition, Ramona Africa of the Free Mumia Coalition, and Amiri Baraka, poet and activist.

By their adventurist meeting with Ahmadinejad, the 100 implied their support for him at the very moment when he is using extreme repression against those who have peacefully protested against his government’s theft of the June 2009 election. Dissidents in Iran are frequently dragged from their homes, jailed and issued long sentences, and tortured, and some have been executed for the crime of participating in demonstrations. Iran has long pursued anti-gay, anti-women, and anti-worker policies. It is not necessary to support any of the opposition politicians (let alone the U.S. government) in order to unconditionally condemn the current regime and support the actions being taken by the Iranian masses to end it. We need also to protest against Ahmadinejad’s anti-Semitism and his speech at the UN implying that the U.S. orchestrated the 9/11 attacks on itself.

Some of the meeting’s participants’ organizations have long histories of supporting repressive regimes. Others simply belong to a part of the so-called Left that will support any group or nation opposed by the U.S. government, without regard to what that group or nation is doing to its own citizens or how atrocious are its politics. These Leftists subscribe to the policy that U.S. imperialism is the greatest evil in the world, and, therefore, anyone who opposes it should be supported.

The tendency within the U.S. Left to base politics solely on anti-U.S. imperialism, even when that means tacit support for reactionary politics like Iran’s, has brought ill repute on the whole Left. Only a Left that is totally out of touch with reality would think that it will gain adherents by being associated with Iran. Even governments that have flirted with Iran as a counterweight to U.S. hegemony, like Brazil, have pulled back from it—Lula recently made a plea to the Iranian government to stop the death by stoning slated for a woman convicted of adultery. We condemn every group, person, and government that flirts with Iran, and, in fact, we condemn those who do not speak out against the Iranian regime.

How much longer will the anti-imperialist Left be hobbled by the mentality that “the enemy of my enemy is my friend”? When will it see the need to project what we are for? In our opinion, the anti-war movement has been shrinking instead of growing over the past nine years largely because of its tendency to condemn only U.S. imperialism. MHI members have urged the movement to develop people-to-people solidarity with the women, workers, youth, and minorities in Iraq and Afghanistan who are struggling against U.S. occupation and also against their own repressive governments, reactionary movements of political Islamists, and warlords. We believe Americans would want to support such organizations of women, workers, and others, if their stories were known. But our efforts to persuade the anti-war movement to re-orient itself in this manner have not succeeded. The movement has stuck to its narrow anti-imperialist politics. We believe that this is one reason why it has failed to gain enough popular support to affect U.S. warmongering.

Some months ago, we attended the opening of an International Socialist Organization (ISO) conference to hear the Afghan feminist and human rights advocate Malalai Joya, who was on tour promoting her recent book, A Woman Among Warlords. Joya had been expelled from the Afghan parliament for speaking the truth about the warlords in the government. She gave a beautiful speech calling for women’s rights and democracy as well as an end to the U.S. war. The ISO still proceeded to speak as if the only matter to be discussed was U.S. imperialism. One of us got the floor and repeated Joya’s call to support the Afghanis’ own struggles against their rulers and oppressors—adding that our talking about this was a way to build the U.S. anti-war movement. At the end of our member’s remarks, Joya got up, bent down over the edge of the stage, and kissed her on both cheeks. Whereupon an ISO speaker jumped up to say, on the contrary, that we should engage only in “knee-jerk anti-U.S. imperialism” (his words).

We urge the Left anti-imperialists who attended the meeting with Ahmadinejad to reconsider such “lesser evil” politics. They can only hurt oppressed people in other countries, endanger Leftists here by giving the government an excuse to attack the Left, and cripple the Left’s ability to build mass movements against U.S. policies. By remaining silent about or supporting odious foreign governments, they misdirect attention away from the capitalist nature of the entire world––the “two worlds in every country,” as Raya Dunayevskaya called it.

Some people complain that the Left is divided into too many small groups, and should unite around its common goals. We disagree. Rather than sinking to the lowest common denominator, we think Leftists need to clarify their politics, even if that means splitting into more groups. The American people should have a real choice—a choice between groups that promote ideas about building a new, non-capitalist and free society, and groups that are willing to reproduce existing social relations such as misogyny and warlordism, in return for a change of government.

We are battling on two fronts: against our ruling class, and against the bad ideas that dominate so much of the Left.

Afghanistan’s Reversion to Taliban Rule is a Tragedy

Taliban rule is an incomparable tragedy for Afghan people. Men will be murdered; women & girls will be enslaved. Feminist groups will be shut down; staffs & clients will probably be killed. Biden is to blame for failing to plan a safe withdrawal. […]

Terror Attacks We Don’t Hear Much About

Ed. note: MHI deplores and condemns terror attacks everywhere. In the U.S., we don’t hear much news about those that are outside Western Europe. So we are re-printing reports from Afghanistan and Iran below. […]