Andrew Kliman of Marxist-Humanist Initiative will appear in a Reddit “Ask Me Anything” (AMA) next Tuesday, May 28, starting at 10 am Eastern Daylight Time (2 pm Greenwich Mean Time).

The AMA will take place on the r/LateStageCapitalism “subreddit” (forum), which has more than 400,000 members, according to Reddit. 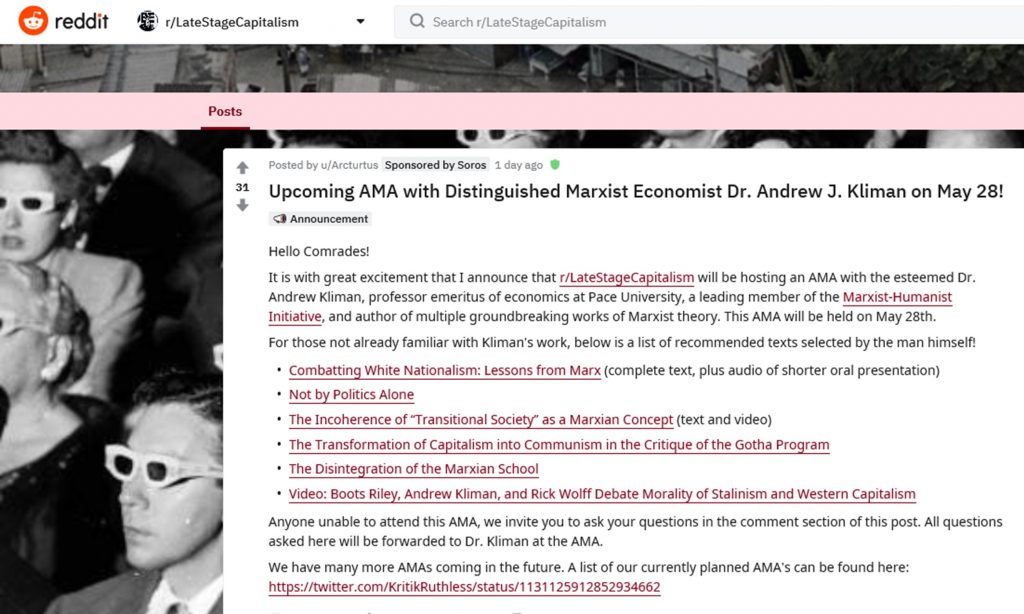 “Ask Me Anything” has been defined as a “trendy internet slang term” for interview. Reddit users post their questions on a forum, and the interviewee posts his or her responses.

While questioners can ask Kliman anything, a list of suggested readings that he sent to the r/LateStageCapitalism subreddit indicates his interest in discussing the struggle against Trumpism and white nationalism; the question of what must be changed to transcend capitalism; the struggle against resurgent Stalinism; and the disintegration of “Marxian economics.”

Below is a recording of MHI’s May 9, 2012 public meeting in New York City, which discussed our article “FAQs (and Far-Too-Infrequently Asked Questions) About the Occupy Movement and MHI’s Relationship to It” and the […]

Adventures in the New Economy: The New Home-Work

by Tiffany Goldman In the “New Economy,” many of the available and newly created jobs require that the employees “work remotely.” The employee is expected to furnish the work environment…be it at the local Starbucks––with […]

“Value, Price & Prattle: A Response to Lopes, Byron, and Historical Materialism,” by Andrew Kliman. Exposes serious errors and misrepresentations in a paper on the “transformation problem,” challenges its main claims, and asks for retraction. […]