In our pamphlet Resisting Trumpist Reaction (and Left Accommodation), Marxist-Humanist Initiative discussed the persistent efforts to normalise Trumpism. And, sadly, Trump has delivered. In this short discussion, I look at Trump’s legacy in the area of anti-Covid-19 measures across Europe––including the United Kingdom (UK), which has recently left the European Union (EU).

The EU has achieved a degree of co-ordination among the member states. For example, if a person has stayed in a EU country with a low Covid-19 infection rate within the past 10 days, that person is free to travel back to the home country without restrictions. If the person has stayed in a simple high-risk area (as opposed to a virus variant area, which is the highest-risk category), then the person needs a negative test to enter an EU country, and has to quarantine. And there is a degree of co-ordination in terms of allocating available vaccine doses among the member states. In addition, the recent European soccer championship revealed that most EU member states had restrictions in place regarding access to stadiums, both restrictions on which spectators are allowed in a stadium (those who have been vaccinated twice or who test negative) and restrictions on how many spectators are allowed to attend.

However, this is also the point where co-ordination ends. The World Health Organization raised concerns about “easing of restrictions in some of the host countries”. For starters, fans partied outside the stadiums in inner-city areas without masks and distancing. And Hungary allowed a full stadium in Budapest. Spectators there had to be fully vaccinated, but it is not clear whether there were checks and enforcements. So there was no room for social distancing, and few spectators wore masks. 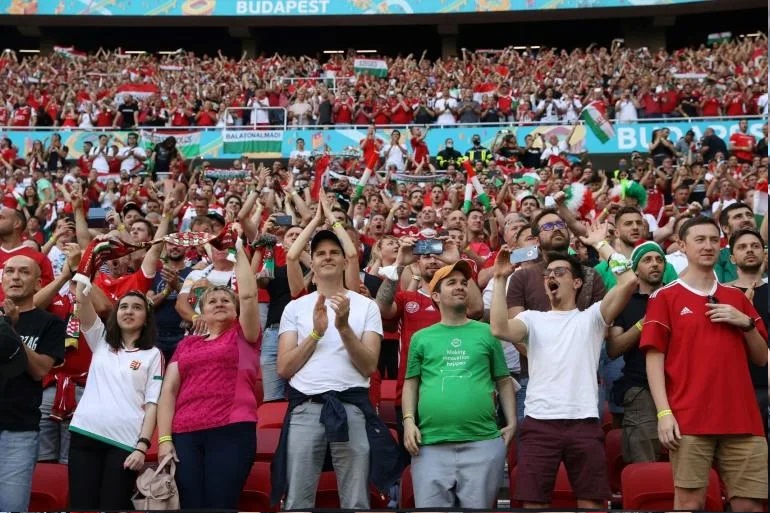 Similarly, England allowed 67,000 spectators into the Wembley national stadium, which can hold 90,000—so again, there was little social distancing and masking. And, shockingly, it was revealed in the media that the Wembley authorities did not check for vaccinations or negative COVID tests; spectators were simply allowed to attend the eight matches played there. Also shocking is the fact that soccer-association officials and other VIPs were entirely exempt from quarantine measures.

The Union of European Football Associations, European soccer’s governing body, has therefore been criticised, especially for selling so many tickets in Budapest and London. Yet it is also striking that Hungary has a dictator at the helm (his latest “deed” being a ban on books that do not project the heterosexual “norm”), and that the UK has a Prime Minister who, at the start, followed Trump’s line on Covid-19: do as little as possible. Eventually, the Prime Minister, Boris Johnson, was forced to take a stricter stance and to put the country into lockdown. Later, however, Dominic Cummins, Johnson’s former chief aid, gave a damning account of how the Johnson government dealt with the Covid-19 crisis. Cummings explicitly called Johnson “unfit to be Prime Minister” and also called former Health Secretary Matt Hancock incompetent. Cummings claims that Hancock and Johnson had failed to grasp the gravity of the situation.

Is all this a Trump legacy? My personal view is that it is indeed, given that Johnson pursued much of the same approach to Covid-19 as did Trump himself and Bolsonaro in Brazil. And there are other indications that Johnson behaves like Trump did—for example, accusing his opponents of “betrayal” and “surrender”, and denouncing fellow members of Parliament (MPs) as “saboteurs” and judges as “enemies of the people”. As a consequence of this denunciation, some MPs received death threats and their offices were attacked, which led New Statesman contributor Martin Fletcher to declare that Johnson, like Trump, has a “diminished sense of right and wrong”. In my view, the episode is an indication of normalisation of Trumpism during and after the Trump era—what is normalised is “normal”, but neither acceptable nor good, of course. I hold similar views about Orban’s Hungary.

Another issue recently arose in the UK. When people enter the UK, their full vaccination only counts if it was administered in the UK. Thus, UK residents who go on vacation outside of the UK cannot return home unless they were vaccinated in the UK before they left. In the absence of a plausible reason for this policy, and the UK government has not given one, it smacks of a sense of superiority in the post-Brexit environment, a sentiment that “only we ourselves do it right”.

EU countries do not display these airs and graces. Those which ease pandemic restrictions for fully-vaccinated travellers (not all member states do; it is usually the countries that depend on tourism that do so), the only issue that matters is whether the vaccine is on the EU’s list of approved vaccines. Thus, it does not matter in which country two doses of Astra/Zeneca, Moderna, or Biontech/Pfizer were given, nor does it matter which authority outside of the EU has approved the vaccine.

But these things matter to the Johnson government. So again, in the absence of an alternative plausible explanation, I think this displays a sentiment of the UK’s superiority over the EU. This sentiment, egged on by the normalisation of Trumpism, is a legacy to be overcome.

This is not to say that the EU has no issues of its own to deal with. For example, it has its own anti-vaxxers. A recent article in Salon argued that anti-vaxxers in the US take away other Americans’ freedoms. They do so by slowing down the progress of vaccination, so that the virus not only spreads (as it might amongst vaccinated persons), but, crucially, it also causes unvaccinated people to fall ill. The very same issue is present across the EU as well as the UK: anti-vaxxers claim that it would be a restriction on their own freedom if they were forced to get vaccinated. But they aren’t engaged in a fight for freedom as such; they want their own freedom, but fight against the freedom of those who have been fully vaccinated—for example, their freedom to go without a mask in public places, and their freedom to be allowed to see tourist attractions, sit in cafes, and visit museums without first getting a negative COVID-19 test.

In my opinion it is worth fighting against the “freedom” that anti-vaxxers take for themselves, the “freedom” of not getting two simple shots. This needs to be fought whether the government—or rather, a group of individuals at the top—takes the Trumpist line of “every person fend for themselves” or whether the government tries to pressure anti-vaxxers.

Challenging the “Covidiots” on the Global Pandemic

Ravi Bali looks at limitations in the UK’s pandemic response, and considers how the economic lockdown may be justified based on the little we know about the threat from this new virus. […]

As nuclear war clouds loomed, and concerns over Donald Trump’s emotional stability mounted, MHI met to discuss and adopt this new Perspectives thesis. The six sections of this 30,000-word document provide our analysis of and response to: Trumpism and leftist accommodation to it; the Resistance; left-populist economics; “post-truth” politics; white nationalism; and individual responsibility for the collective development of Marxist-Humanism.

These Perspectives are now available as an 88-page bound pamphlet. Click here for synopsis. Click here to order the pamphlet. […]

The Threat from the Far Right, Post-Trump

New and older far-right groups are now united with the Republican Party base under the banner of Trump. Davis Matthias-Foster investigates how those groups have changed post-Trump and what it means for the far-right movement. […]