I don’t think we need a change in the political-philosophical orientation of our Perspectives regarding Trumpism. They’ve held up well; they’ve served us well. They’ve conveyed the extraordinary dangers of Trump and Trumpism, to ourselves and to the world. The dangers about which we’ve warned have, unfortunately, come true––in spades. Our Perspectives regarding Trumpism have also indicated, in a general but needed way, how forces for freedom and for protection of liberal democracy need to respond to the Trumpite threat. They’ve pinpointed MHI’s special role in this process––fighting accommodation to Trumpism within “the Left,” to try to the ensure that the Left once again becomes a force that stands for freedom and human rights for all. I think that this needs to remain our special role, if only because we are the only ones who articulate this perspective explicitly and consistently.

The most recent supplement to our Perspectives, “‘Black Lives Matter’ and the Vanguard Role of Black Masses Today,” also anticipated, prior to the fascistic January 6 Capitol Insurrection, that

the Departments of Justice and Homeland Security under Biden may be compelled to reverse the Trumpites’ policies and side with the victims of white-supremacist terror instead of the perpetrators. While the Biden administration would undoubtedly prefer a return to the pre-Trump status quo, such a return may be impracticable, owing to the growth and increasing virulence of white-supremacist activity in the meantime.

However, in light of the many new developments we’ve experienced since the 2020 elections, I do think there’s a need for a comprehensive and methodical statement that identifies and responds to at least the most important of the new developments.

The most important lessons to learn from recent events, it seems to me, are first, that Trumpism remains a dire threat even though Trump is no longer in office. Indeed, it now appears to have a whole second-tier leadership that can take over (albeit not necessarily without difficulty) if Trump dies, is imprisoned, or whatever. And second: the dominant force that keeps Trumpism alive and threatening is the Trumpite base.

We already knew these things; we’ve already said them repeatedly. But I think it’s important, now, to further reflect on, internalize, and project them, and work out what they imply.

After Trump lost the election and the Republicans lost control of Congress—and especially after the January 6 Insurrectionists threatened the life of Mike Pence and their lives as well––people like Mitch McConnell, Kevin McCarthy, and Lindsey Graham were all chomping at the bit to jump off the Trump train. They certainly were willing to accept the fact that Trump had lost in a free and fair election. But neither thing happened, because the Trumpite base would not allow it. On the contrary, Republicans who deviate from the Trumpite line have regularly been condemned, censured, and removed from posts (most notably, Liz Cheney), and they are starting to be “primaried.” 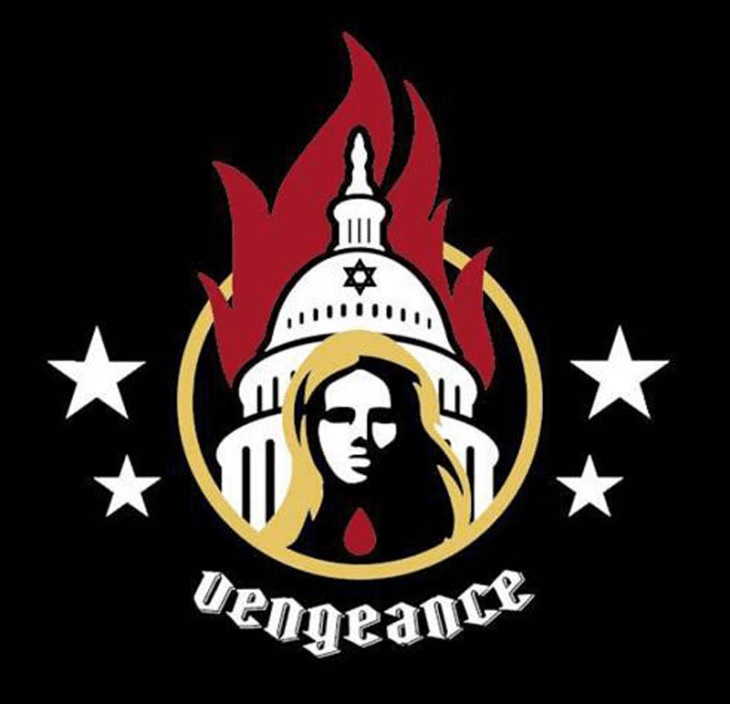 One version of the “Ashli Babbitt flag.” As ADL explains, the Star of David on the dome of the Capitol building is “likely a nod to the antisemitic theory that Jews control the U.S. government, or the Zionist Occupied Government (ZOG) as white supremacists refer to it.”

To be sure, the establishment Republicans have their own reasons to support the accelerating campaign of voter suppression and the far-more alarming new threat of election nullification. But things like the internal purge in the GOP, the refusal to accept that Trump lost (phony election audits, etc.), refusal to investigate the insurrection, and the efforts to turn an enemy combatant into a martyr are another matter. They are bottom-up, not top-down, phenomena. They are driven by the Trumpite base.

And, to be sure, the base doesn’t function without help. There are scads of local Republican party apparatuses that the Trumpites have taken control of. And there is the Trumpite media––Fox, One America News Network (OANN), Newsmax, etc. But Fox continues to toe the line largely because its viewers start to abandon it when it steps out of line; the same viewers are the ones who have enabled OANN and Newsmax to emerge as its rivals. The Tucker Carlsons and the Marjorie Taylor Greenes have no military power nor independent financial power. Their power is bottom-up, not top-down. It comes from the Trumpite base.

It is hard for many progressives and Leftists to accept that there is a mass base for arch-reaction. It is more comforting to imagine that an undifferentiated mass known as “the people” is good and pure and noble and waiting for our message, or at least that it would be if it weren’t constantly being manipulated by a few puppetmasters at the top. This is the crucial illusion that underlies the politics of the Jaco-dustbin crowd and the anti-neoliberal “left” generally. We need to redouble our efforts to fight it.

There is a reason that far-right politics is called “populism.” The reason isn’t that it’s unpopular.

The work of Keith Kahn-Harris may prove helpful in this regard. The main segment of a recent Radio Free Humanity podcast episode is an interview with him. He’s a British sociologist who wrote a book on denialism a few years ago. (Bear in mind the denialist element of Trumpism: denial that Trump lost the 2020 election; denial about COVID and the vaccines, etc.) In his book on denialism, Kahn-Harris wrote,

I that do not believe that, if only I could find the key to ‘make them understand’, denialists would think just like me. … If denialists were to stop denying, we cannot assume that we would then have a shared moral foundation on which we could make progress as a species. Denialism is not a barrier to acknowledging a common moral foundation, it is a barrier to acknowledging moral differences.

One final thought. The research we have been doing on the threat to liberal democracy, including study of serious academic work on the topic, and comparison of the US and other countries, has become especially important in recent months. The attempts to whitewash and normalize the fascistic January 6 Insurrection, and the push for election nullification and attempts to discredit the 2020 election, have raised the threat to liberal democracy in the US to a whole new level, a qualitatively different level. We urgently need to continue this work.

MHI will hold a public meeting in NYC on Wednesday, June 6, entitled “Assisting the Self-Development of #TheResistance to Trumpism & to Authoritarianism in Europe,” featuring Andrew Kliman and Ravi Bali. […]

May 21-22: Left Forum Panels on Alternative to Vanguardist/ Spontaneist Binary + others

May 9, 2016 by MHI Philosophy/Organization, US News

MHI will present a panel at Left Forum 2016 entitled “The Vanguardist/Spontaneist Binary and the Marxist-Humanist Alternative.” Left Forum, the largest left academic conference in the U.S., will take place May 20-22 at John Jay […]

by Andrew Kliman   I have just written a full-length essay, “Combatting White Nationalism: Lessons from Marx,” on how to deal with the threat of Trumpism and similar manifestations of white nationalism. If you’d […]