On September 11 (see below), I posted the following comment on a piece by Kevin Anderson published on his group’s website.

One important obstacle to dialectical thought is the practice of throwing around unsubstantiated and false charges. For instance, allegations like this:

“the attempt to ground a viable Marxist-Humanist organization in an ever-narrower set of formalistic rules about organizational structure that crowds out the philosophical-political grounding necessary to any serious Marxist organization.”

I’m reminded of Hegel’s comment that “I have been only too often and too vehemently attacked by opponents who were incapable of making the simple reflection that their opinions and objections contain categories which are presuppositions and which themselves need to be criticized first before they are employed.”

Presuppositions like the “crowding out” bit–as if it were self-evident that Marxist-Humanist philosophy and Marxist-Humanist organization are, and must always remain, opposites that jockey for position and crowd one another out!

And presuppositions like the “attempt to ground” garbage. You know damned well that Marxist-Humanist Initiative (which you’re attacking but refraining from saying so) is attempting “to create an organization so firmly rooted in its philosophy that it will not succumb to diversions that may arise from personal agendas, and that will be capable of developing and concretizing that philosophy over the long haul, regardless of who its members may be.” [www.marxisthumanistinitiative.org, home page]

Now it is true that, to support his false allegation, Anderson refers us to Peter Hudis’ attack on Marxist-Humanist Initiative. But the problem is that Hudis falsely represents MHI’s position on the relationship of philosophy to organization, as has been demonstrated in detail in “Hudis Falsely Represents MHI Position on Relationship of Philosophy to Organization” [www.marxisthumanistinitiative.org/philosophyorganization/hudis-falsely-represents-mhi-position-on-relationship-of-philosophy-to-organization].

Six months have passed since this document was published. Its disproof of Hudis’ false allegations has not been challenged. That’s because the disproof cannot be challenged.

Truth is good. Falsehood is bad.

The reason can’t be that the comment is critical. The website does publish critical comments. For instance, one comment on his piece contains the following statement: “your marxist humanism must turn into stalinism.” That’s a good deal more critical than what I wrote. So there has to be another reason why my comment hasn’t (yet) been published. Maybe the truth hurts?

[Note, added on Oct. 2, 2010: I’ve been asked to explain the picture below. It’s a screenshot that I took when I submitted my reply, in order to be able to provide evidence that I did submit it. You can see, above it, another comment on Anderson’s piece that was published and does appear below it on the site. (When you submit a comment to their site, it appears on your screen just as if it were published, but other people can’t see it unless and until the powers that be approve it, and they haven’t approved mine.)] 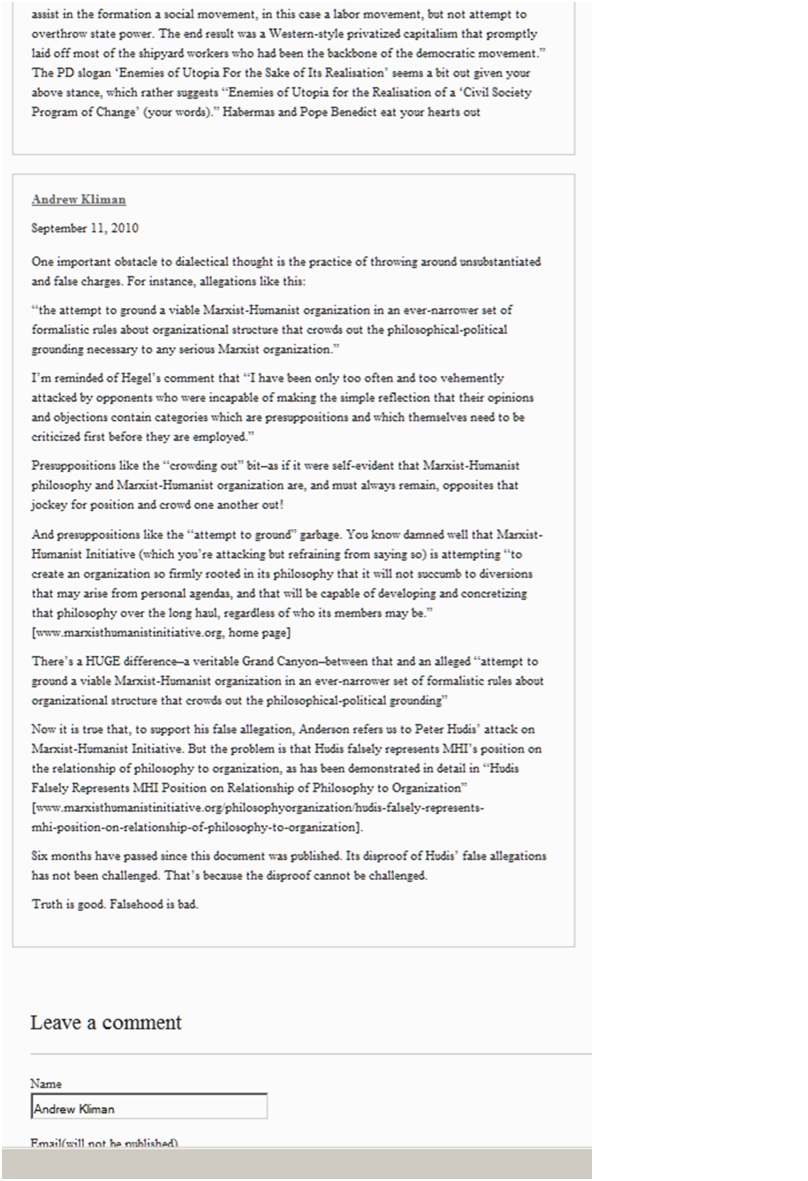 The Marxist-Humanist Initiative, along with the New SPACE, sponsored the panel “Concretizing Marx’s Alternative to Capitalism: A Marxist-Humanist Perspective” at the 2009 Left Forum. Below is the audio from that panel’s presentations and along with […]

Last week, Andrew Kliman spoke in a open Zoom seminar on “Global Marxism” for a South Korean group. His talk was entitled “Combatting the Ongoing Trumpist/White-Nationalist Threat: Marxist-Humanism vs. the Anti-Neoliberal ‘Left.’” […]