A video of this meeting is now posted at http://www.marxisthumanistinitiative.org/economic-crisis/video-can-income-redistribution-rescue-capitalism.html

On Monday, September 16, Marxist-Humanist Initiative (MHI) will host a public discussion of  Andrew Kliman’s just-published pamphlet, “Can Income Redistribution Rescue Capitalism?,” which challenges Monthly Review’s account of the latest capitalist economic crisis. The claims made by the Monthly Review school have dominated the U.S. Left’s thinking for decades, but the pamphlet argues that its account of the crisis, and others that similarly attribute the crisis to rising income inequality, are riddled with a great many serious deficiencies – factual, theoretical, and political. The pamphlet suggests that the crisis is instead rooted in the decades-long decline in profitability and associated problems within capitalist production. What is at stake is whether the prevalent Left goal of income redistribution could actually solve the current economic crisis and prevent the recurrence of similar crises. Before embracing such notions, it would do us all good to carefully scrutinize the factual and theoretical claims that underlie them.

Open discussion will follow presentations by the author and Mike Dola.

The meeting will take place between 7 and 9 p.m. in Room 403 of Pearl Studios, 500 8th Avenue (between 35th and 36th Streets), Manhattan, New York City. People outside of New York City who wish to participate via videostream should write to MHI at mhi@marxisthumanistinitiative.org.

MHI requests that participants in the discussion purchase the pamphlet and/or make a donation. The pamphlet is available now for $8, plus $2 shipping in the U.S. It can be purchased on our literature page, or by writing to MHI, P.O. Box 414, Planetarium Station, New York, NY 10024, or by calling MHI at 1 (888) 579-2245. 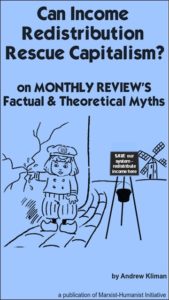 The contents of the pamphlet include:

“More Misused Wage Data from Monthly Review: The Overaccumulation  of a Surplus of Errors”

Selections from The Failure of Capitalist Production : Underlying Causes of the Great Recession

“Trickle-Up” Economics and its Political Implications

Upcoming MHI Meetings on Marx’s Critique of the Gotha Program

Upcoming MHI Meetings on Marx’s _Critique of the Gotha Program_. Focus on capitalist vs. communist society, and on the CGP as “new ground for organization.” 3 meetings, July 31-Aug. 28 (alternate Sundays). Attendance by invitation; apply to MHI. […]

On Trumpism, the Left, and Marxist-Humanism: Platypus Review Interview with Andrew Kliman

September 4, 2019 by MHI Resistance to Trumpism

“On Trumpism, the Left, and Marxist-Humanism: Platypus Review Interview with Andrew Kliman” […]