I don’t consider that the world has changed all that significantly since 2018, when our major Perspectives were first issued. Of course, huge changes were wrought by the pandemic, which has killed over four million people worldwide and continues to threaten millions more, especially in the overwhelmingly unvaccinated Third World, and now increasing again in the First World. It is wreaking havoc on all countries’ economies and on all people’s health. Now that we can make vaccines, the US and Europe—and the logic of capitalism—have reached a new depth of insanity, by blocking other nations from making their own and by not supplying vaccines to countries that can’t make it.

But nothing about Trumpism has changed just because the man is out of the White House. (The severity of the epidemic in the US is also largely Trump’s fault, for having done nothing to contain it.) Trump is gone but Trumpism has intensified and spread its reach, in the US and in many other countries that are succumbing to populism and totalitarianism around the world. In the US, Trumpism has less power out of office, but it still holds more than a third of the country in its grip—“the base” has not diminished, and it controls the party that has half of the Senators, a lot of the House of Representatives, and that holds a majority of the state houses and legislatures and a majority on the Supreme Court.

And many Trumpites increasingly revel in untruth and in conspiracy theories of the most “unbelievable” and dangerous sort. I fear there is a short step from the American Nazis’ slogan “Jews will not replace us,” to “kill all the Jews,” and another short step from “children should not study the true history of Black people,” to “Blacks are responsible for their own problems and for crime, and should be killed.”

Trump’s party’s attempt to hang onto power by voter suppression is no longer only an ignoble experiment; it is a steamroller.[1] State after state is passing restrictions that make voting more difficult for the poor and people of color. And the Supreme Court just knocked out what was left of the already decimated federal Voting Rights Law. These changes portend nothing less than the end of democracy in the US and loss of our civil rights.

Biden’s failure to announce and execute a plan to save voting rights, as the Democrats’ first and top priority, is not a good sign. The whole Democratic party should be doing what the Texas state legislators did: walk out of their duties and refuse to consider any other laws––not work at all, until voting rights are secured. And the so-called left, as well as all Black and Latino organizations, should be organizing mass rallies and national strikes until the right to vote is secured by Congress and enforced by the Justice Department. 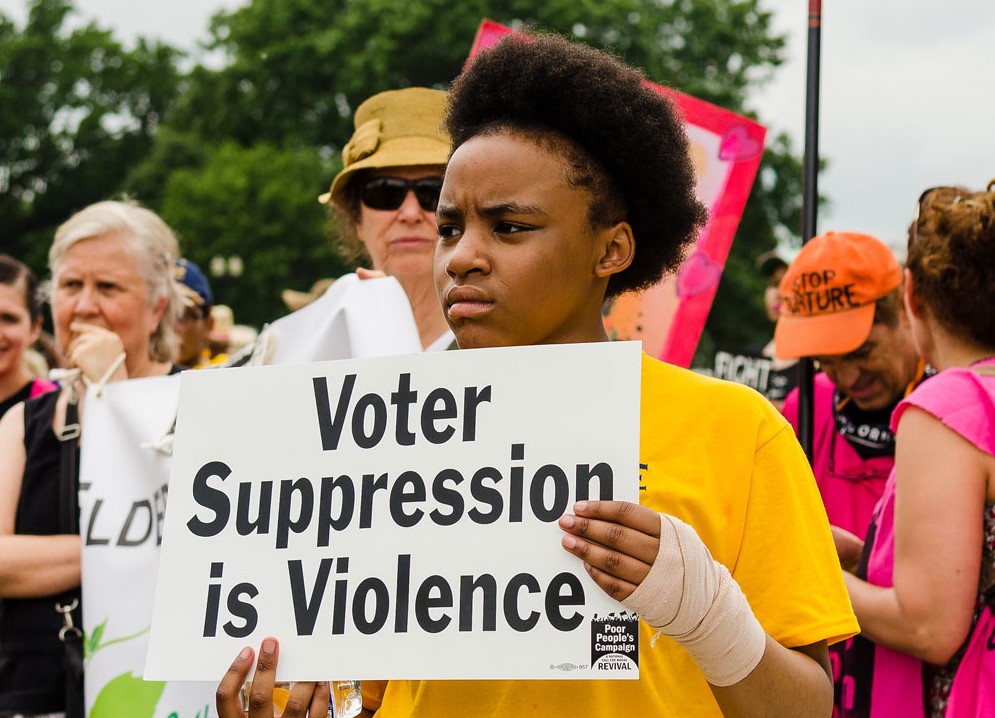 The decades-long curtailment of women’s reproductive rights may be coming to a final conflict, as 26 Republican-controlled states have now limited or are attempting to severely limit women’s right to choose. 105 bills to limit it have been introduced and 11 of them are already enacted. Ominously, the Supreme Court just agreed to hear a case from Mississippi which asks directly to overturn Roe v. Wade (the case that recognized abortion as a right in 1973), and not only to chip away at it.[2] Biden has announced that he will not attempt to add justices to the Court so as to undo the right-wing majority that Trump created. This is a terrible mistake––not even to try to do it––one that we should all be in the streets over, as well as demanding that Congress codify Roe into national law.

Another non-change from Trump is the continuing “crisis at the border,” as hundreds of thousands of Central Americans fleeing poverty and violence are stopped from entering the US. Biden has made a few changes to Trump’s draconian policies: no longer separating young children from their families; letting children in to apply for asylum; and re-recognizing domestic abuse as possible grounds for asylum. But these are drops in the bucket. Moreover, the DACA recipients are still not legalized, and in fact one federal court has declared that the program must end.

Let me mention, ever so briefly, that the Resistance against the right is also flourishing. I’ll list just a few recent events:

There is no question that fighting reactionary politics and ideologies, and supporting Black Lives matter (BLM) and the Resistance, must be among our chief tasks. Articles for our web journal and speakers for our podcast can help the movements.

But even more fitting for our organization is the ideological struggle to keep Marx’s vision of a new society alive.

The Need for Ideological Battles

Where we can fight directly, in addition to supporting the movements against Trumpism and ruling class control, is in the battle of ideas, especially within the so-called left. Ideas must be fought out with a left that has heretofore given a bad name to Marx’s real alternative to capitalism. Marxist-Humanist Initiative has long been waging this fight, but needs to get much more aggressive about attacking writers and organizations that focus on trying to win over the Trumpists with economic promises. Trumpists are consumed with racism, misogyny and homophobia. The left-liberal media are now calling those racists fascists; why should we do less? The core Trumpist “base” will not be won over. The goal of defeating Trumpism remains paramount, even if it takes a civil war.

Exposing and fighting racism is key to building a movement that can turn the situation around. Our statement on BLM needs more discussion by Black and white radicals. There is apparently now some reaction against economic determinism in the left—how can there not be, if you compare the left’s feeble attempts to take over the Democratic Party to the sweeping changes brought by, and still inherent in, the BLM movement? The days of the left uniformly deferring its agenda to economic determinism may be over.

This realization seems to be influencing Bernie Sanders, who has become Biden’s right-hand man in unifying the Democratic Party on major Congressional legislation. This realization may be causing the “left” Sandernistas to veer away from strict economism. Some are recognizing that BLM should have altered everything on their agendas, as it revealed what is the real source of change in this country.

[1] See https://www.thisishowyoucan.com/post/save-the-date-march-for-voting-rights-august-28-2021: “Since January, 48 states have introduced 389 bills that amount to shameful, outright voter suppression, and many have already become law. These laws suppress voting methods that enrich our democracy and lead to high turnout: banning ballot drop boxes and mail-in voting, reducing early voting days and hours, restricting who can get a mail-in ballot, prohibiting officials from promoting the use of mail-in ballots even when voters qualify, even criminalizing the distribution of water to voters waiting in the long lines these laws create.”

There were large demonstrations in Washington and elsewhere on August 28, but nothing comparable to the one-million strong 1963 March on Washington that led to the passage of the Civil Rights Act of 1964 and the Voting Rights Act of 1965–the latter now eviscerated by the Supreme Court. Legislation to assure voting rights is still stalled in Congress, and Republican states continue to pass restrictions that may well mean the end of US democracy.

[2] Since this was written, an even more total prohibition and punitive law has been passed and gone into effect in Texas. It makes nearly all abortions illegal. The high court just refused to temporarily enjoin its enforcement pending its decision after hearing the case; this portends the overruling of Roe in either this or the Mississippi case.

Dunayevskaya’s reputation does not match the reputations of some other great revolutionary Marxist thinkers, but Travis Blute argues that it deserves to do so. […]

February 25, 2016 by MHI Alternatives to Capital

Marxist-Humanist Initiative (MHI) held a discussion Jan. 23 on state-capitalism, both the theory developed by Raya Dunayevskaya in the 1940s, and its practice in the Soviet Union, in spite of that nation’s claims to have […]