Below are videos of the three panels sponsored by MHI at this year’s Left Forum in New York City on May 31. The presenters spoke in the order of the names listed below the description of each panel, and audience discussion followed the presentations.

There is much less opposition to capitalism out there than meets the eye; what passes for “anti-capitalism” is frequently just “anti-neoliberalism.” This panel will explore the differences between them and the dangers of conflating them. It will focus in particular (but not exclusively) on events in Greece. Questions will include: Can we blame austerity, recession, and exploitation on neoliberalism, or are they products of capitalism? Will replacing neoliberal regimes––while keeping capitalism intact—solve our problems? Does it constitute a “transition” to socialism? Two Greek activist/theorists participated via Skype. They represent TPTG (Children of the Gallery), a political group affiliated with the movement against wage (or unwaged) slavery in Greece. Their paper is entitled “Syriza is not an anti-capitalist party, but is it really against neo-liberalism?”

Harvey vs. Marx: on capitalist crisis and “Marxist entertainment”

This panel discussed the on-going debate between David Harvey and Andrew Kliman (and Marx!) on capitalist crises, carried on New Left Project, after Harvey critiqued Karl Marx’s theory of capitalist economic crisis, which is rooted in his “law of the tendential fall in the rate of profit.” While Marx repeatedly stressed that this is the “most important law” of political economy, Harvey questioned whether it can help us understand the Great Recession and whether it is really even a law at all.

Topics included Andrew Kliman’s response to Harvey, Doug Lain’s category of “Marxist entertainment,” formulated by him in a podcast discussion with Kliman (Zero Squared #11: Marxist Entertainment), Harvey’s response to Kliman (New Left Project, March 30), and Kliman’s rejoinder. The category “Marxist entertainment”  highlights the problematic atmosphere in which Marxist discussion occurs, which helps to explain why egregious errors (such as those contained in Harvey’s critique) keep recurring and go unchecked. 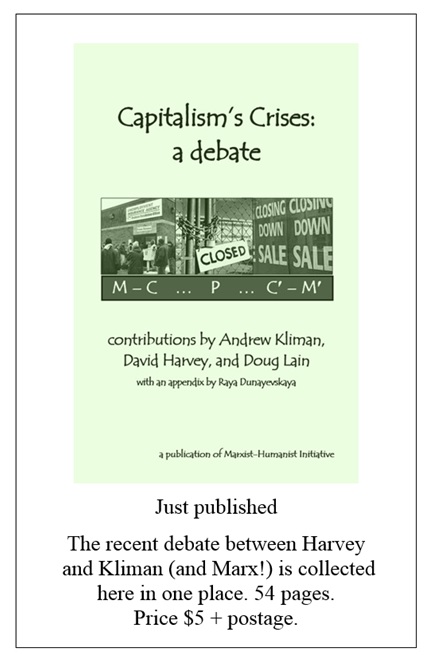 Karl Marx’s “Critique of the Gotha Program,” one of his last writings, addresses ideas about a future non-capitalist society and the proper “program” for a revolutionary organization. Although much has been written about the “Critique” over the years, its implications for organization were all but ignored until Raya Dunayevskaya argued that it provides us with a new foundation for working out the role of a Marxist organization and its relationship to movements outside it. A recent international class series focused on this aspect of the “Critique.” This roundtable continued the investigation, challenging certain deeply entrenched left ideas—which are not in Marx—especially the belief that revolutionary intellectuals’ task is to “raise people’s consciousness.”

A roundtable discussion co-sponsored by Marxist-Humanist Initiative (MHI) and Internationalist Perspective (IP) was held at Bluestockings Bookstore in N.Y.C. on Dec. 2, 2013.

On “New Passions and New Forces”: Marxist-Humanism’s Break from both Spontaneism and Vanguardism

By Andrew Kliman. In a April 18, 1976 piece, “Our Original Contribution to the Dialectic of the Absolute Idea as New Beginning:  In Theory, and Leadership, and Practice,” Dunayevskaya stated,