In May, Trump and his Attorney General Jeff Sessions imposed a “no tolerance” policy at the Mexican border with Texas and began ripping children from their parents’ arms when they cross the US border without papers. In the six weeks between April 19 through May 31 alone, 1995 traumatized children were taken from their parents and imprisoned in separate detention facilities. The minors were traveling with 1,940 adults who said they were the children’s guardians, according to Department of Homeland Security (DHS) spokesman Jonathan Hoffman on June 15.

In spite of public outrage, the “zero tolerance” policy continues daily. Some children are as young as four years old, and one nursing infant was recently taken from his mother by government agents. A man whose three-year old child was taken from him killed himself in detention three weeks later.

At first the children were housed in a former Walmart’s, rented to the government’s contractor,  but now a tent city is being prepared for them in Tomillo, Texas, where the temperature rises to 100 degrees Fahrenheit. In addition to those who came recently with their parents, some 11,000 children who attempted to enter the US unaccompanied by relatives are now imprisoned.

In fact, the parents and children have a right under US law to cross the border in order to seek asylum in the US. They used to be processed at the border and then allowed their freedom until they were called to appear at a hearing on their asylum claims.

Reminiscent of the history of slavery in the US, and of Native American and Japanese-American internment as well as Hitler’s concentration camps in Europe, the recent action has shocked the conscience of the world and engendered protests across the US.  More protests are planned for June 17 throughout Texas and elsewhere. 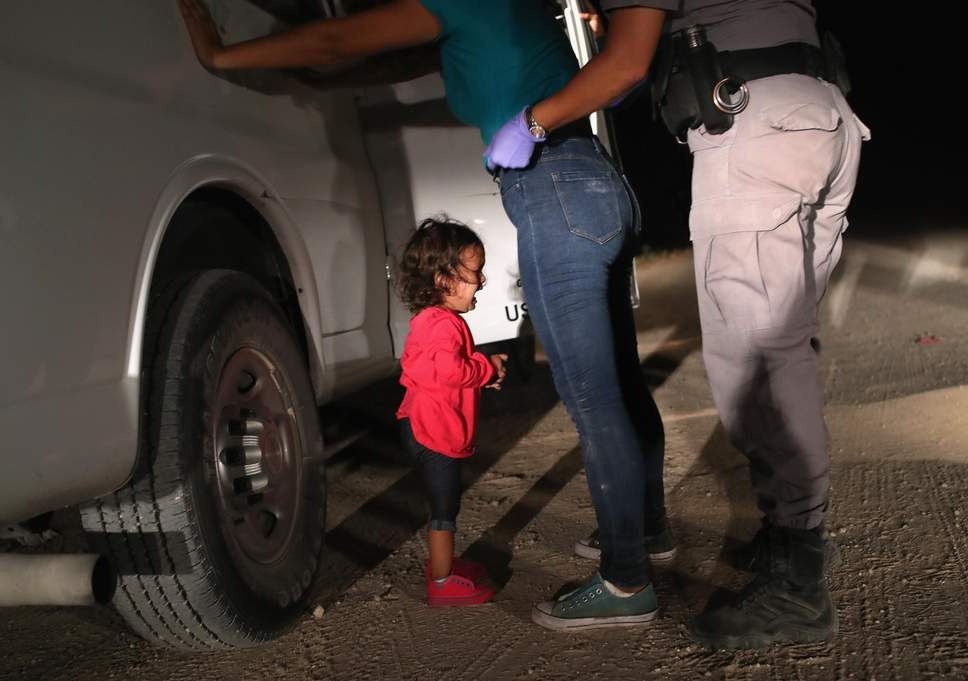 The current policy to separate children from their parents is obviously meant to deter people from trying to come to the US and pursuing asylum claims. But people who are fleeing likely death or enslavement in El Salvador, Guatemala or Honduras due to violent gang rule have not stopped coming to the US in desperation. One woman described to TV cameras how a gang demanded that she give up her son and daughter to them, the son to fight and the daughter most likely to sexual slavery.

At the same moment, the DHS announced that it is curtailing the number of asylum-seekers it will consider to be eligible for asylum on the grounds of fleeing gang violence or domestic violence.

In response to objections to the separation policy, Attorney General Sessions and Trump’s spokeswoman, Sara Huckabee Sanders, quoted a Biblical passage which says that people should obey their government. Trump began a campaign of lies, insisting that family separation was “a Democrat law” and only Democrats in Congress could change it.  In fact, it’s not required by law and began recently as his policy. It could be ended by him in an instant.

The real story is that Trump is using the horrendous practice as a bargaining chip. He is trying to get funding for the wall he promised to build along the border, which Congress has so far refused to fund. A proposed bill in Congress would give $25 billion for the wall, allow the DACA “Dreamers” to remain, and end the separation of families. Some Republicans and the Democrats have refused to go along.

Immigration is, apparently, the main issue bothering Trump’s base. White supremacist Breitbart News’ senior editor-at-large Joel Pollak has said that the fight over immigration is “a proxy war between the establishment and the insurgent grassroots.” The supremacists understand that unless they can stop immigration and suppress minority voting, the white, native-born Christian population will soon become a minority, and it will become numerically impossible to elect another Trumpist. The cruelty to children is part of white supremacy’s last stand—unless it seizes power by other means.

Jews Fight Back Against Bannon, Show Solidarity with Other Targets of Trumpism

November 21, 2016 by MHI Resistance to Trumpism

by MHI participants On November 20, about 1000 Jews and others participated in a “Jewish Resistance” protest to condemn the right-wing Zionist Organization of America (ZOA) for inviting Steve Bannon, Donald Trump’s “chief strategist, to […]