Faced with mounting Resistance to his new policy of ripping apart families of immigrants and asylum seekers, widespread public revulsion against its cruel, fascistic nature, and the possibility of substantial Republican electoral losses in November, Xenophobe-in-Chief Donald J. Trump has just capitulated. He has announced that he will soon issue an executive order that will end (at least temporarily) the family-separation policy.

This is a huge loss for Trump, his white-nationalist agenda, and his racist, anti-immigrant base because his attempt to hold immigrant children hostage—literally—has failed. He has been holding them hostage in an effort to get Congress to curb legal immigration and funding for his wall on the Mexican border; in exchange for these new laws, immigrant children apprehended at the border would be allowed to stay with their families. Republicans in Congress are currently in the process of drafting and passing new legislation along these lines. But Trump has been forced to capitulate now, before any such legislation is approved, receiving nothing in return! 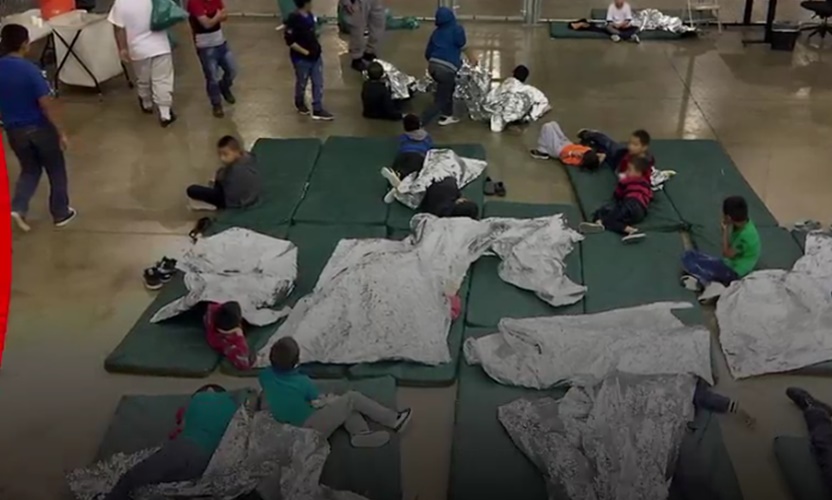 Immigrant children, separated from their families, locked up in a cage

Furthermore, he has been forced to capitulate on a matter that he falsely claimed that he could do nothing about, because he was just enforcing the law. Of course, his base does not care about his lies. But the fact that Trump has been compelled to “own” his family-separation policy, instead of calling it the enforcement of existing law or a discretionary decision of his attorney general, may prove helpful down the road to people fighting Trumpite immigration measures in the courts.

Trump’s impending executive order rescinding the family-separation policy is slightly less cruel and fascistic. He intends to hold people apprehended at the border in captivity indefinitely. Children will be incarcerated in jails together with their families while they await deportation or asylum hearings.

Now is the time to kick the Trumpites while they are down—to crush them (and their faux-leftist enablers) again and again, until these vermin that have infested America are gone for good.

Editors’ note, June 20, 2018: A typo in the final sentence of this article–“American”–has been corrected

On Brexit: The Sovereignty Trap

by Chris Gilligan The debate on the United Kingdom’s (UK’s) future in the European Union (EU) is a confused, confusing and largely negative one. Both the Leave (Brexit) and Remain campaigns have relied on negative […]

Down with Le Pen, Trump, and Anti-Neoliberal “Left” Collaborationism

by Andrew Kliman   Jean-Luc Mélenchon, a supposed far-left anti-neoliberal politician, came in fourth in yesterday’s first-round voting for the French presidency. He then announced that he won’t call on supporters to defeat neo-fascist […]