New York is abuzz about the recently installed “Fearless Girl” statue now confronting the massive, bronze “Charging Bull” statue in the heart of Wall Street. The petite girl holds a defiant stance as she stares down the big, brutish symbol of a rising stock market.

The girl was put there temporarily, but many women and girls want her to remain permanently. The creator of the bull, Arturo Di Modica, demands the girl be removed, claiming that she infringes on his sculpture.

The artist who made “Fearless Girl,” Kristen Visbal, says her work represents “the power of women in leadership.” The creator of “Bull” claims that the bull represents “freedom, peace, strength, power and love,” and that the girl improperly invades its space and detracts from it.

Talk about symbolism! This instance is perfect! And some of us believe that art, like the US Constitution, cannot be frozen in time, but should speak to what is happening around it. 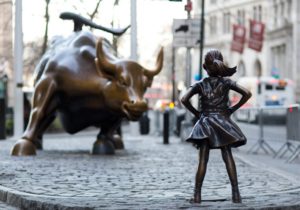 Q&A with artist Yevgeniy Fiks about “The Lenin Museum”

by Michael Dola “The Lenin Museum,” an exhibit of works by the artist Yevgeniy Fiks, is on view at the CUNY Grad Center’s James Gallery in New York City through January 17th, 2015.