Literally minutes before the verdict was read in the Derek Chauvin trial for George Floyd’s murder last year in Minneapolis, another cop, Nicholas Reardon, shot and killed Ma’Khia Bryant, a 16-year old Black woman, in Columbus, Ohio. Reardon was responding to a 911 emergency call at a residential address, where he found several young women involved in a fight. According to body camera footage released by the Columbus Police Department, Reardon approached the driveway of the residence and yelled for everyone to “get down.” When Ms. Bryant appeared to threaten one of the other young women with a knife, Reardon, according to witnesses, shot Bryant numerous times, and she died.

Although to date it is not known whether Ms. Bryant was acting in self-defense or was the aggressor in wielding the knife, Reardon made a snap determination of Bryant’s guilt and sentenced her on the spot to execution by cop. 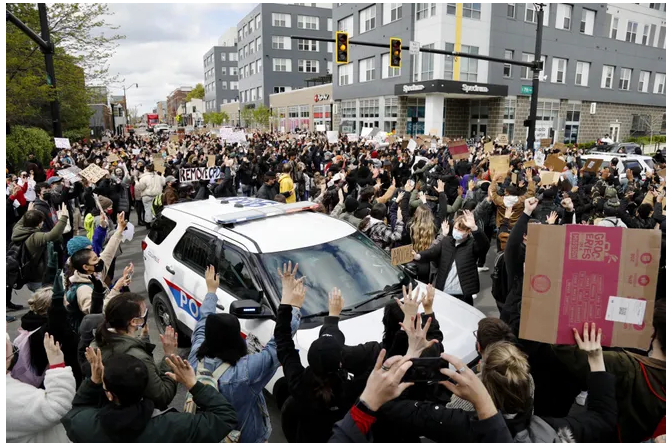 Shortly afterwards, when the incident was broadcast on the local news, there was an immediate reaction of disbelief and anger, coming as it did when Blacks and whites city-wide were celebrating the guilty verdict against the killer cop in Minneapolis. Protesters poured into the streets. In addition, hundreds of students at Ohio State University gathered on campus and marched to the downtown area that had been the rallying place for the George Floyd solidarity demonstrations.

The students joined with BLM activists and others outside police headquarters to protest yet another killing of a Black person by the Columbus police. The next day, students briefly occupied the Ohio Student Union and demanded that the university “cut all ties” with the Columbus police. In contrast, most community leaders expressed their frustration, but continued to preach calm and to champion police reforms.

Although the case is still under investigation, the Columbus police’s “use of force experts” have publicly stated in the press that, since the events happened so quickly, there was “no opportunity to “de-escalate” the situation. As a result, according to these “experts,” Reardon was justified in his “appropriate use of force” to prevent harm to the young woman in the confrontation with Ms. Bryant. However, none of the “experts” said that the police training manual instructs recruits to determine guilt and to sentence and carry out an execution in a “brandishing with a knife” incident.

Including Ma’Khia Bryant, there have now been five police killings of Black people by Columbus police since early December 2020. On December 3, 2020, Casey Goodson Jr. was shot outside his apartment five times in the back and killed by a local SWAT deputy in an apparent case of mistaken identity. On December 22, 2020,  Andre Hill was shot by Columbus cop Adam Coy, who conveniently decided to turn off his body camera while responding to a non-emergency call at a residence. Coy is now under indictment on murder charges, felonious assault and dereliction of duty. On March 5, 2021, Andrew Teague was shot and killed after a police pursuit-car chase resulted in a head-on collision with the victim’s car and another vehicle. And, on April 12, 2021, Miles Jackson was shot and killed at a local hospital emergency room where he had been taken for a medical condition and got into a shoot-out with police and a hospital security guard. And now 16-year old Ma’Khia Bryant, on April 20, 2021.

What Will Be Next?

The day after Bryant’s death, a vigil in her honor was held in the same area where Columbus police shot and killed 13-year old Tyre King in September 2016, after he pointed a BB gun at them and then ran away. At the vigil for Bryant, a member of the Black Abolitionists Collective and vigil organizer, Hana Abdur-Rahim, told the crowd: “The [police] system was designed for white supremacy. The system was designed perfectly. We need…a new one.” (1)

In the course of struggle, it is natural that existing ideas for reform are replaced by new ideas for more fundamental change, as the reforms prove to be narrow and limited. However, this is not to say that the successful prosecutions of killer police, and the reforms currently being demanded nationwide, are not important. Also particularly important is that, in the killer cop Chauvin’s case, the “blue wall of silence” was broken when Minneapolis police officials testified against Chauvin.

As important as these events are, prosecuting a tiny number of “bad individuals”  will not get to the root of  the true nature of policing under capitalism – to protect the system of exploitation, oppression and racism. Only when these “deep roots” are challenged by the emerging multi-racial mass movements striving for a new society (as many in the movements for social justice are now doing) will we be free of policing as we know it, and all these tragic deaths that go with it. Then we can all breathe.

For a more detailed analysis of these issues see “‘Black Lives Matter’ and the Vanguard Role of Black Masses Today” and the MHI editorial, “On the Conviction of George Floyd’s Murder.”

Rittenhouse–Poster Boy for the Right of Self-Defense, or Closet Vigilante?

Aaron Williams demolishes claims by Spencer Leonard (of the allegedly leftist Platypus group) that Rittenhouse’s acquittal was a victory for the “civil right” of self-defense, not a precedent for further Trumpism-inspired right-wing violence. […]