The MHI editorial is very right to emphasize the youth in the movement protesting the police murder of George Floyd. I attended one of the earliest New York City protests that began at the Barclays Center in Brooklyn. The turn out was huge, multi-racial, and, overall, very young.

However, this is not to suggest that this is exclusively a project of youth. I got into a conversation with an older black woman about her memories of the Black Panther movement and how excited she was by the present moment. In fact, the police actually weaponized the presence of older protesters. During a tense moment, when a scuffle broke out between several protesters and police, an officer grabbed a nearby older white woman and began screaming that the protesters were putting her at risk. She didn’t seem to want to be a prop of his histrionics, but allowed herself to be escorted away from the scuffle.

Several pictures of the police turn-out at Barclays have gone viral. Over 200 police officers were stationed there to deal with the protesters. They were lined up in formation, intimidating and out in force. Contact between the police and the protesters became very tense, very quickly, and it only worsened from there. The police made gratuitous use of pepper spray and force.

Multiple times during the protest, white protesters formed a line in front of the other protesters, the idea being that racist police are less likely to harm white people. It was a remarkable display of solidarity, and one continually restated throughout the night with different groups of people. This wasn’t a choreographed action done by a handful. It was often accompanied by rising tension and somebody yelling “white bodies to the front!” People listened, helped, and stood together. And it seemed to be an effective tactic.

The protest at the Barclays became a march to downtown Brooklyn. Very peaceful, with overwhelming support from the community. There was not one block that we walked down where people didn’t cheer from their windows or their front stoops. At one point, an over-eager protester seemed about to smash a window, but someone else cried out, “This is a historically black neighborhood; we have so few of those left. DO NOT DESTROY ANYTHING!” Again, people listened. I saw a few bus stops smashed, and scaffolding and buses graffitied with messages of support for the Black Lives Matter movement and George Floyd’s name, but no one touched the homes or the buildings in that area. 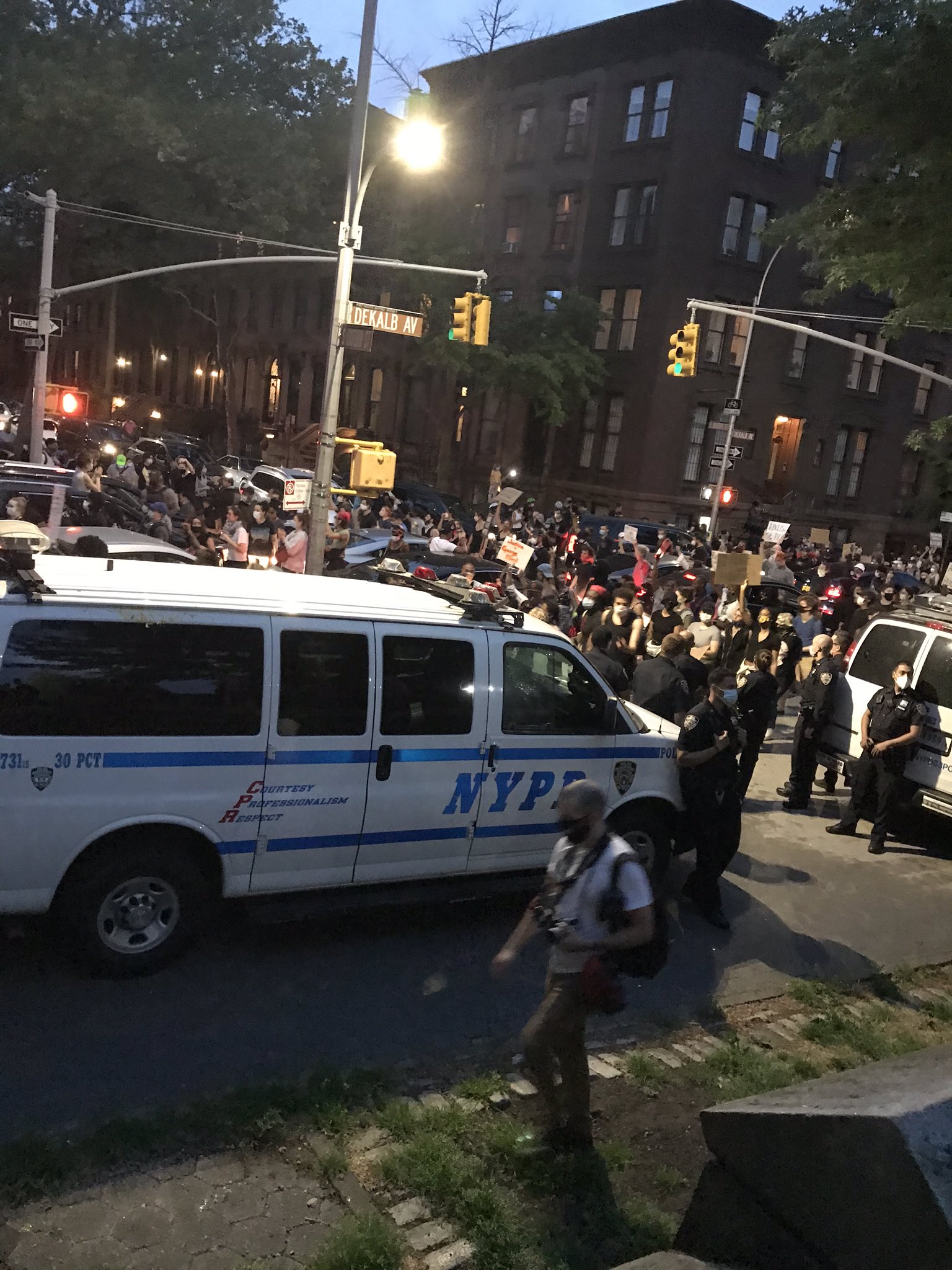 In fact, the graffiti on the buses was done with the implicit approval of the bus drivers. Every MTA bus driver we passed honked their horns, cheered, clapped, and were visibly laughing with joy. The customers on the bus responded similarly.

I spoke with several fellow protesters, one of whom was bearing a Palestinian flag. We got to talking about the history of Irish-Arab solidarity. Solidarity seemed to be a topic on everybody’s mind that night.

On Long Island, in the +13 Republican district I call home, the atmosphere is markedly different. Long Island is one of the most segregated places in the country and one of the hardest hit by the COVID-19 pandemic, due to the poor black areas having very high rates of infection. Alongside this disparity between black and white areas, white anxiety and racism are rampant. Rumors spread from suburban house to suburban house that “the rioters are planning to come here next,” and “the Antifa hordes are coming any minute now by bus.” Anxious suburbanites were pulling their Louisville Sluggers out from the crawlspace. A particularly pernicious Facebook rumor got a bunch of people to patrol one town’s Main Street between 8 and 9 p.m. on Saturday.

I helped organize a social distancing event to show support for Black Lives Matter and speak out against the police brutality on the Island. The turn out was gob-smacking. Not only that, but after the car caravan, many got out of their cars to stand with protesters outside of a town government building. Events of similar and larger size have been popping up all over the Island, from Brentwood to Mineola and Port Jefferson to West Islip.

Most striking, however, was the police response to the car caravan I took part in. When all of the protesters converged on a parking lot to begin the caravan, we noticed police cars circling the lot. Moreover, we noticed obviously undercover cops in plain cars, or even just uniformed police officers trying to be less noticeably in plain cars. Thinking they were being slick, many of these officers followed people long after the event had ended. I can only speculate as to why they may have done this, but I’m certain that they were writing down license plate numbers and addresses.

In “Two Years After the Murder of George Floyd: Minneapolis Funds Private Security Policing,” Gabriel Donnelly updates the BLM movement’s struggle to defund the police. It failed–and the city is now paying militia groups for “security.”

Editorial: On the Conviction of George Floyd’s Murderer

The April 20 conviction of Derek Chauvin for the murder of George Floyd brought joy and hope to the Black Lives Matter movement, even in the midst of more cop killings of Black men and women. […]