Last Friday (April 12), Marxist-Humanist Initiative (MHI) presented a program on “Brexit and the Future of Ireland and Scotland: Beyond the Pro/Anti-Brexit Quagmire” at Bluestockings Books in Manhattan, New York City. The complete video of the program—presentations and discussion from the floor—is below.

The program featured Chris Gilligan, a Scottish/Irish senior lecturer at the University of the West of Scotland, who is a veteran migrant rights activist, a founder of Open Borders Scotland, and author of Northern Ireland and the Crisis of Anti-racism (University of Manchester Press). A second speaker, Adam Plante of MHI, gave “Remarks on Marxist-Humanism’s Challenge to the ‘Left.’”

Gilligan outlined three ways in which the Brexit debacle has been a quagmire: first, as a seemingly irresolvable dilemma; second, as a swamp that has trapped the masses in a zero-sum leave/remain dichotomy; third, as a dangerous situation. He explained why the British left had so enthusiastically embroiled themselves in this quagmire. He concluded by suggesting some ways to start to move beyond the quagmire.

Plante emphasized the need to reject the common “given” alternatives and to ground action in a liberatory philosophy.

A spirited and wide-ranging discussion followed the presentations. 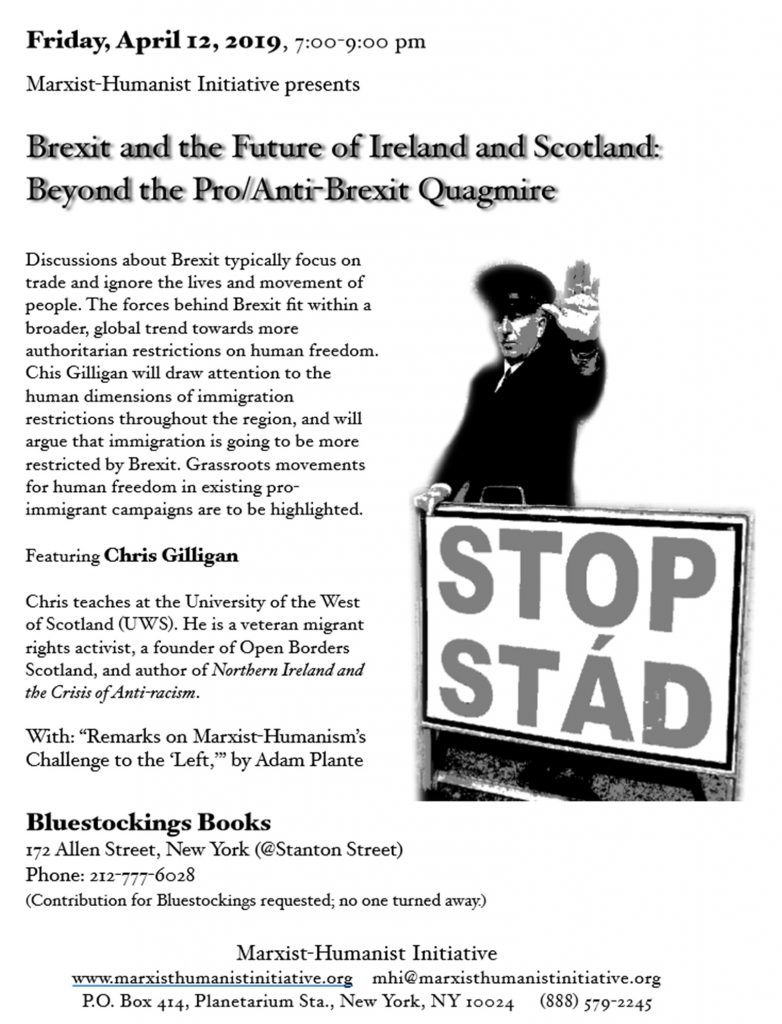 Ralph Keller considers the first 4 months of Brexit in force, how the final agreement developed, and the beginning of the consequences. […]

The UK Left after Brexit: Free Movement and the Unions

by Thomas Fagan   Unite the Union The issue of free movement of European Union (EU) workers is an incredibly important issue on the Left and in the trade unions in particular. Unite the Union […]