MHI will participate in two public meetings taking place at London’s Birkbeck College on Tuesday 11 June and Tuesday 18 June, 2019. At both meetings, Marxist-Humanists will engage with other perspectives. Everyone is welcome to attend.

The first meeting is a panel discussion on the women’s struggle today. This meeting, while open to anyone, will give priority to women in the audience to speak.

Where is the Women’s Struggle Today? From Liberation to Equality

The women’s movement has made great strides in spreading its demand for equality for women in recent decades, with many more young women now openly declaring themselves as feminist.

Despite the success in raising feminist issues, the practical results have been mixed. The historic achievement of Ireland legalising abortion was followed by a recent reversal of the right to abortion in Alabama. The legal gains around equal pay legislation, women’s access to education and against many forms of gender discrimination are being strongly resisted by neo-conservatives and further-to-the-right misogynists, who are determined to turn the clock back.

The xenophobic right that have come to power in many places around the world, including now in the U.S., are also extremely hostile to women. These forces of reaction are pushing back against the “me-too” campaigns opposing sexual harassment, they are ridiculing safe-spaces for women, and generally rejecting much of what women are demanding to be able to live as equals to men. Recently a male UKIP candidate publicly joked about whether he would rape a female Labour MP.

The demands from women themselves have perhaps become more modest and necessarily defensive in the face of this misogynist onslaught. Where once feminists talked of women’s liberation and gave that name to the whole movement, we now have a tiny Women’s Equality Party.

The women’s movement in the US took off as an outgrowth from the abolitionist movement against slavery. Those women who participated in the struggle against that most extreme form of racial injustice were inspired to later pursue their own fight for equality and full dignity. This criss-crossing of freedom struggles existed long before the term intersectional ever existed. The women’s movement has historically put the freedom of women in the broader context of needing to create a free society for everyone.

On the now annual “women’s marches” against Trump to mark his inauguration, many banners display the message “women’s rights are human rights”, again proclaiming the indivisibility of rights that should be afforded to everyone as a human being. Despite this, conservatives will often describe women’s demands as some kind of “special interest” pleading.

This panel will have a range of women from different backgrounds and different perspectives looking at where the women’s struggle is today. 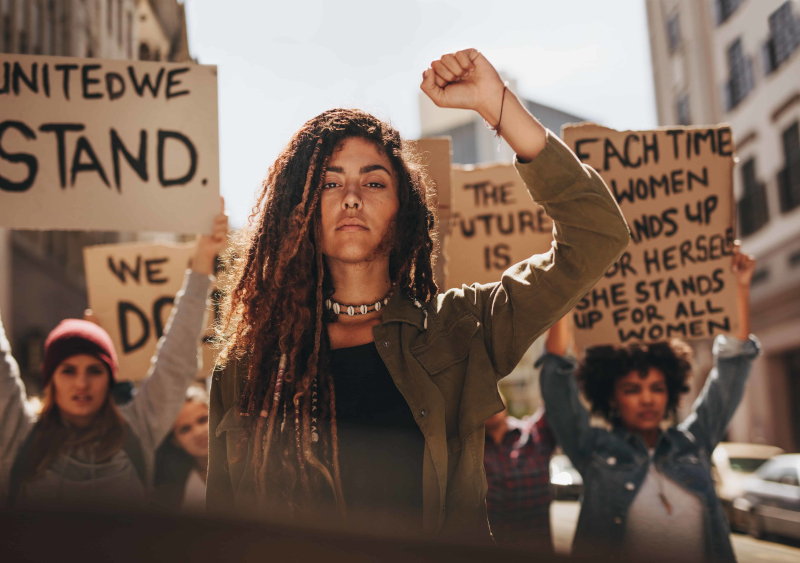 The second meeting is a discussion between an MHI representative in London and a US anti-Trump activist on solidarity work in the UK and elsewhere with #TheResistance of the American people against Trumpism.

Donald Trump–An Extraordinary Danger to the World. What We Can Do.

The character and politics of Donald Trump make him the most dangerous US president ever. He represents, literally, a threat to the whole world. While cynics outside the U.S. may be tempted to say Americans are getting what they deserve, we should recognise there is a massive resistance from Americans against everything this POTUS stands for.

Trump’s regime and his supporters have been targeting many people, especially immigrants, people of colour, women, Jews, Muslims and LGBTQ. This has not gone unchallenged. There has been huge grassroots opposition to Trumpism from these Americans and many others who refuse to let this regime trample their rights and liberties.

We outside America should recognise that if Trump consolidates his power and manages to suspend many of the democratic checks on his power as President, as he has threatened with his trenchant attacks on the free press, the independent judiciary, Congress and anyone critical of his reign so far–then things will get much worse for almost everybody. If America succumbs to authoritarian rule, then democracy across the world will be in a far more perilous condition.

This meeting will discuss how in our own countries we can speak out against Trump and Trumpism in order to support the Resistance in the United States and how to spread this support around the world. Please come along to find out how you can help.

Dunayevskaya’s 1958 book continues to present a challenge to prevailing left thinking today. Central to her examination of 200 years of revolutions in thought and action is the question, what happens after the revolution? […]