Starting in late May and continuously throughout June, protests broke out across the UK with the rallying call, “Black Lives Matter!” They were initially inspired by and in solidarity with the mass US Black Lives Matter demonstrations sparked by the brutal killing on 25 March of George Floyd in the city of Minneapolis, Minnesota (see our Editorial and articles under US News). The UK protests have gone on to include many demands aimed at ending racism right here.

Most participants, and the organizers as well, have been politically unaffiliated people under the age of 25. Its youthfulness and independence mark this movement out as something new. 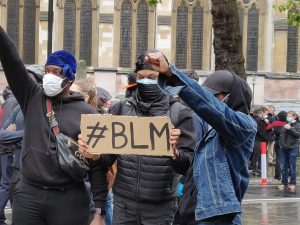 All pictures are of London BLM protest on June 6. Credit: E. Andrian for MHI.

Once again, the US Resistance to Trumpism has taken the lead in inspiring movements against reaction around the world. Many international protests in support of Black Lives Matter (BLM) have broken out in places with and without large black populations.

Estimates so far are that around 200 different protests, large and small, have taken place in major cities and towns all across the UK (for example, Edinburgh and Glasgow in Scotland, Bolton, Manchester, Birmingham in the North of England, and various small towns in Wales).

From the initial march of hundreds from the London suburb of Peckham into the city centre on the last weekend in May, each London demonstration followed the same pattern: they have been well-attended and increased in size as the week went on, growing to around 30 or 40,000 strong, comprised of younger people who are very representative of London’s inner city multi-racial and multi-ethnic community. The protesters have made their presence felt by roving around central London between Hyde Park, Prime Minister Johnson’s Downing Street residence, the Houses of Parliament, and the US Embassy across the river in South London. 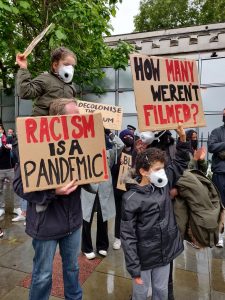 Previously, young people have come out in some numbers on protests around student loans or in support of Corbyn’s leadership bid, but these recent actions–organised via social media–have a much more noticeably spontaneous and determined feel. They have caught many of the usual politicos by surprise. As we write, the larger protests have dwindled, but many smaller, localised ones are still taking place.

Also interesting about the protests here is their frequency, even though many under-25s are first time demonstrators. Many gathered up to three times a week in the early stages in order to conduct static protests or marches in their local areas, all organised entirely via social media. Starting in London, the primarily youth protests have inspired many more to ripple out into other cities and towns around the country.

The strong presence of some well-known Black Britons, such as boxer Anthony Joshua (who declared racism is a virus) and Star Wars actor John Boyega, reflects the general upwelling of support for the protests. It has been said that perhaps this is finally the UK’s #metoo moment with regards to race.

The protests occurred in the wake of media coverage of rather muted World War II “D Day” commemorations, and the Covid lockdown that had dominated the news since March was barely mentioned as the BLM protests gathered apace.

What do the Marchers Want? 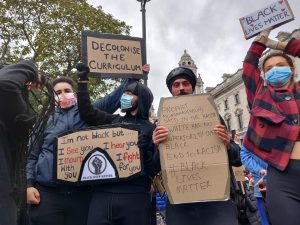 As well as expressing anger and solidarity with African-Americans against the daily racism they face, UK marchers’ concerns include:

The last demand came following the lead of US anti-Confederacy monuments protests. Here it has taken the form of exposing individuals and institutions with links to the Atlantic slave trade. Examples of this strand of the movement in action are protesters pulling down and unceremonious dumping a statue dedicated to slave trader Edward Colston into a canal in the town of Bristol, and the vote (after large daily protests) to remove imperialist Cecil Rhodes’ statue at an Oxford University college. Social media was consequently flooded with the history of the struggles and contributions of black people in Britain, such that even the main stream media (inadvertently?) ran articles on Olive Morris, a British Black Panther! 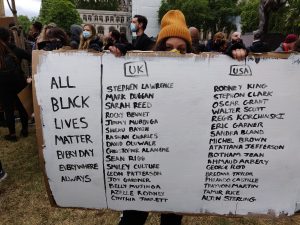 At the marches we attended, slogans on home-made placards that caught the eye included: “White Silence is Violence”, “Justice for Belly” (the black transport worker in London who died after a being spat on by a customer who claimed to have coronavirus), “I Can’t Breathe”, “Say His Name: George Floyd!”, “#BLM”, “Black Lives Matter”, “Pro Black is not anti-white”, “UK Is Not Innocent”, “No Justice, No Peace”, “Black Trans Lives Matter”, “Capitalism is a virus”, “Stand With Us, Hear Us, We See You”, “Black Lives Matter Everywhere”, “Don’t Forget Their Names”, “My Skin is Not A Threat”, “Don’t Ask Us to Fix A Problem We Didn’t Create”, “Who Do you Call When the Police Murder?”, “ACAB” (All Cops are Bastards), “UK is Not Different”, and “Capitalism is Horror Without End”.

On route, people in cars, houses, and apartments called out their support for the protestors, beeping car horns and hanging out their own signs and placards. Opinion polls of the public generally show positive attitudes towards the movement.

A New Movement Finding its Feet

People attending the protests have clearly understood what “Black Lives Matter” meant, expressing the feeling that racism in the UK and internationally is at a crisis point, and the sheer callous brutality of Floyd’s death (“sadism” was mentioned by one young person) resonated very strongly with many young people who may have had issues with UK police themselves or who have friends who had.

Three weeks after the first demonstrations, young people are continuing to organise despite far right threats, and the protests are maintaining their momentum. In small towns around the country, numbers of community and left groups have held more “socially distanced”, static protests, attended by hundreds, where people are urged to “take a knee” in memory of victims of racism like George Floyd and to show determination in their continued commitment to the anti-racist struggle in the UK.

These characteristics of the movement stand out to us: