Britain’s University and College Union (UCU) has been on strike intermittently for the past two months, and just won a re-ballot for further strike action.

What’s happening in a sector that has long been considered a safe haven for good working conditions and pay? We start with the facts and then cover the wider story that includes student protests, a march in London, and a story of declining pension benefits. 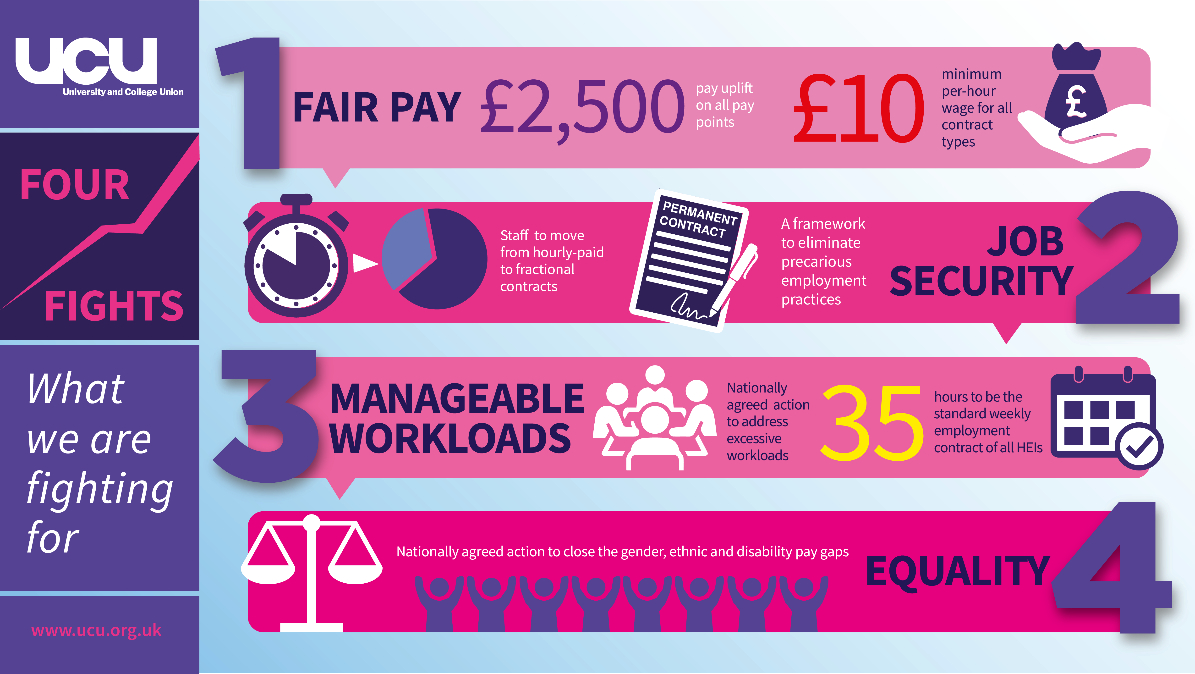 The first fight, as the infographic shows, is about fair pay, that is, the demand for a £2,500 uplift in all salary categories and a minimum of £10 per hour for all contract work, the lowest pay currently being £8.70. Sure, the latest offer from employers is a 1.5% increase, but UCU demands a larger increase because the sector has seen a 17.6% salary fall since 2009 (or even 20%, according to the latest figures), with employers offering no increase during the pandemic in 2020/21. Yet the switch to online teaching during that time has increased the teaching workload, so those employees now do more work for the same pay.

Closely related to “Fight One” is “Fight Four”, i.e., achieving equality of pay. UCU exposed a 15.1% pay gap between women and men, a 17% gap between Black and white staff, and it found that staff members with disabilities earn 9% less than people without disabilities in the same job. This inequality is not only shocking, it is scandalous.

“Fight Two” is about job security, or fighting against casualisation. Specifically, UCU says that 3,545 staff in UK academia are on “0-hour” contracts (meaning they are not guaranteed any work at all), and 68% of research staff currently work on fixed-term contracts that allow for easy dismissal after the contract expires. UCU also says that, throughout the pandemic, employers have chosen not to renew thousands of casualised contracts, while many staff who have found work in the university have felt pressured to work in offices (rather than from home) and to take risks during the pandemic to keep themselves employed. The union wants to reverse this casualisation trend, as part of a push toward a framework that eliminates precarious employment practices. UCU is pushing for improvements because nothing has changed, although the employers claim it has.

Finally, “Fight Three” is about achieving manageable and safe workloads. A Higher Education staff survey has revealed that four in five academics struggle with heavy workloads, with 86% of the staff surveyed having been directed toward mental health support in light of this situation. UCU therefore pushes for a 35-hour normal workweek. This appears to have some effect because employers are at least now sharing information on workload to discuss and negotiate on, and management has shown some willingness to discuss the issue. For example, it says it is considering new pay rates for visiting lecturers (hired for a short period or specified task) and new contracts for graduate teaching assistants. We will see.

The strikes have seen support from students. The President of the National Union of Students, Larissa Kennedy, has commented,

Staff working conditions are student learning conditions and we stand shoulder to shoulder with our educators in fighting for a more just education system. We demand fully funded, accessible, lifelong education where our spaces of teaching and learning belong to the students, staff, and communities they exist to serve. Until then, it is entirely at the discretion of vice chancellors and employers to come to a negotiated settlement and address the fundamental issues repeatedly raised by staff. If they do not, students will hold employers responsible.

Unhappiness with learning conditions led not only to the student union initiating its own campaign for a “New Vision for Education”, but also, importantly, to the recognition that staff and students share the same, objective, situation. A slogan appeared that signifies the recognition of this objectivity: “Staff working conditions are our learning conditions”. Moreover, students at some universities have openly protested together with staff. At School of Oriental and African Studies (SOAS), University London, for example, this has led to management locking out its paying “customers”, the students, on February 22, 2022. Students are the very clientele that management is always so keen, in rhetoric, to nurture and protect. 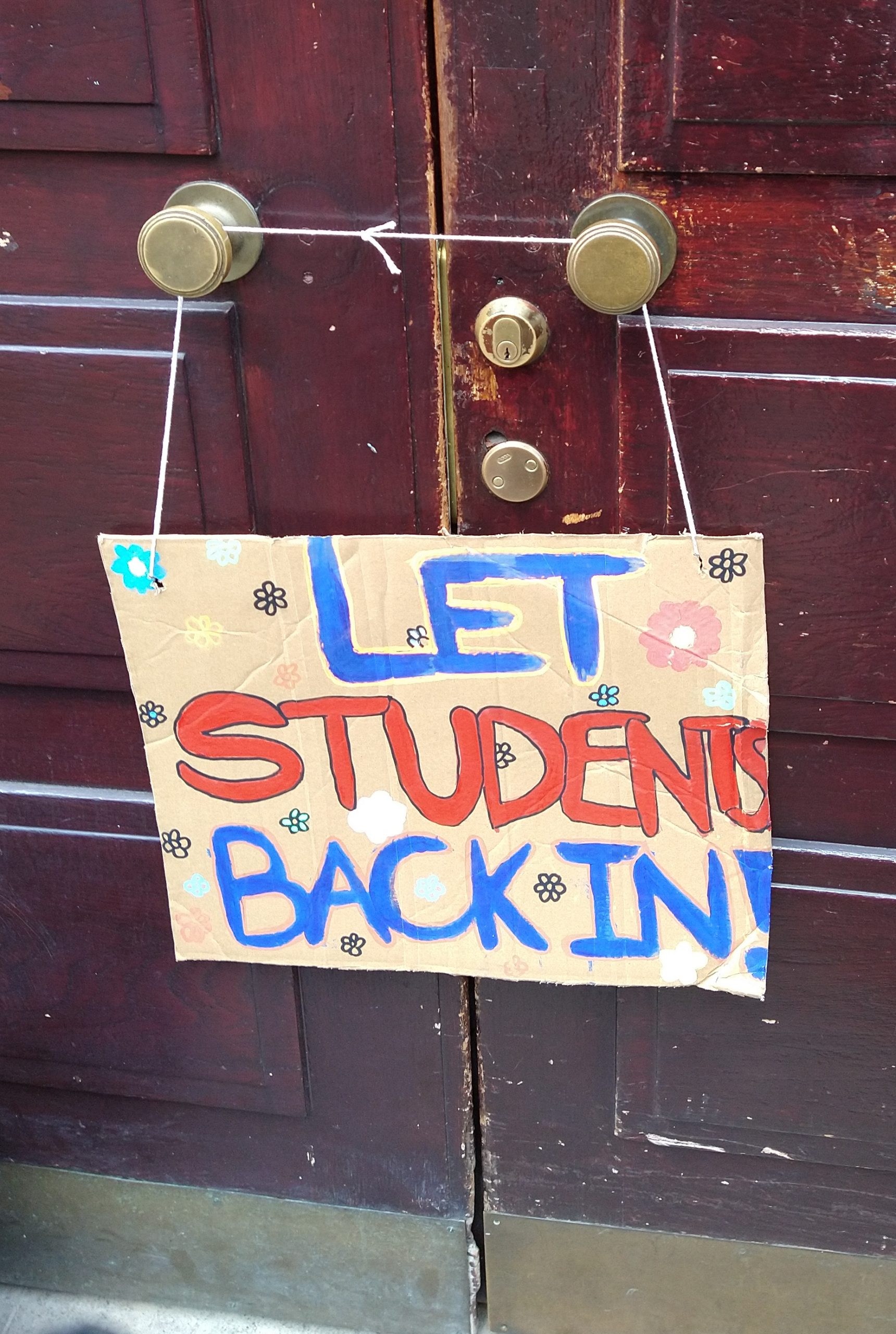 Specifically, SOAS students demanded management compliance with the UCU demands of the “Four Fights” dispute, lower tuition fees as well as levelling of tuition fees (i.e., the same level of fees regardless of a student’s country of origin), and the de-marketisation of education. They also seek to eventually have free education, to remove barriers to disabled students, and support for the Free Palestine movement. The protest must have gotten a bit noisy, so management exerted its power over students and instigated the lockout. It turns out that, like lecturers, students are not free from management’s whims.

Finally, we have one more aspect of the story. On the second day of the strikes, on February 22, strikers across the London universities participated in a 1,000 strong march (my estimate). The march went to the London office of the Universities Superannuation Scheme (USS), a pension scheme for staff in UK academia. Chants repeatedly heard were “free education—through expropriation” (staff and students to run the universities), “no wage losses, take it from the bosses”, and “students, workers and the sick, they don’t cause the deficit—it’s bullshit, come off it, the enemy is profit”.

The reason behind the march was not so much the “Four Fights” demands, but, relatedly, the recent changes to the pension scheme, meaning substantial cuts in benefits. As of April 2022, the main changes in effect are the following:

These are just the latest benefit reductions, which come in light of a £30 million surplus that the scheme generates (as one speaker at the after-march rally claimed), yet USS cannot afford to keep the old level of benefit pay-outs? No, apparently, because the costs of running the scheme have become astronomical compared with what they were in the past. This BBC News article reveals that the costs of administrating USS was £124.9 million in 2018, representing more than a £6 million increase from 2017. Part of this increase is that the boss of the scheme received a scandalous 17% pay raise, when he made more than £500,000 already. His investment bankers are rumoured to make even more than that. So this is where the benefit reductions end up. But of course, the administrators “earn” every penny because they work so much! This no longer a pension scheme—it’s a profit making scam on the back of staff in UK academia.

And then there are university vice chancellors like Alistair Fitt of Oxford Brooks University, who is “disappointed” with the strikes and declares the pension benefits “generous”, calling for more flexibility in the scheme. He might well mean generous and flexible in the sense of increasing his own salary while not budging to the demands of the “Four Fights” dispute. Encouragingly, however, the union has just won the re-ballot for further strike action, achieving the 50% “yes” votes required by law. In light of employers not budging to the “Four Fights” demands, and instead behaving with hostility, this means that staff in academia will have to continue their fight for fair pay, improved conditions and pensions. We will see where things are headed.

The Transatlantic Reach of Industrial Actions in Low-Wage Industries

Eve Currie describes recent strikes by low-wage workers in the gig economy and the fast-food and hospitality industries in the UK and US, and highlights their fights against multifaceted exploitation. […]

On August 16, the South African police shot into a crowd of 3,000 striking miners at the Lonmin platinum mine in Marikana, killing 34 people. The miners had been on strike for a week over […]